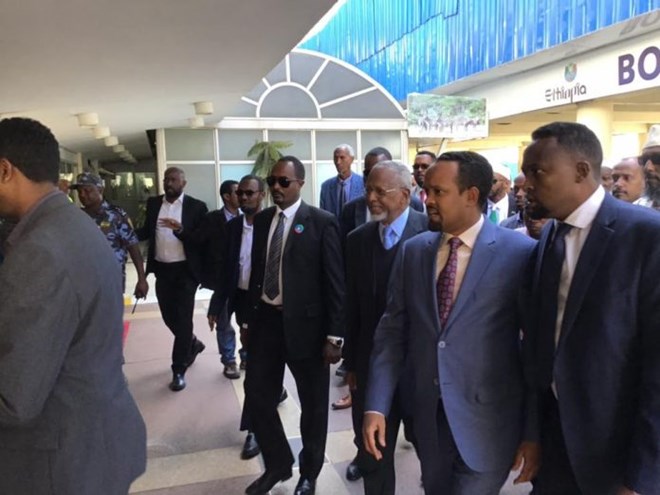 The leader of the (Ogaden National Liberation Front) has been given a rapturous welcome in Addis Ababa on Saturday upon his return from decades of life in exile since the armed rebel group he founded started fighting the Ethiopian government.

Hundreds of people formed long lines on the streets in the city, waving at a convoy escorting Admiral Mohamed Omar Osman, the leader of ONLF rebel group which signed a peace deal with the new Ethiopian government under the reformist prime minister Abiy Ahmed, ending decades of its armed struggle against the state.

Speaking to the reporters in the city, Mr. Osman said that his group would start a new peaceful political struggle for the rights of Ogaden region in which the group had long engaged in deadly fighting with security forces.

As Osman stepped off the plane in the capital, some dozens of government ministers and officials from Ethiopia’s Somali state lined the red carpet to shake the former rebel’s hand and his delegates.

He is expected to travel to travel to Jigjiga, the capital of the Ethiopia’s Somali region on Sunday.  The rebel group’s flag has been painted on the city’s walls in an anticipation for the former leaders’ arrival.

His arrival follows the return of hundreds of ONLF rebel fighters to Ethiopia last month, following a peace deal with the government, ending their bloody rebellion against the government which killed thousands of people since 1994.

The once-banned ONLF rebel group has been fighting for autonomy for the Ogaden region which the government considered as a region under the new federal system for decades.

ONLF’S recent peace deal with the government convinced its fighters to come out of the jungle and started leaving their bases in the neighboring Eritrea which also signed a historic peace deal with its former archrival Ethiopia, ending life in exile and agreed to lay down arms to return to a society they barely recognize.

But reintegrating thousands of fighters including many who have spent at least half their lives into the society which had long considered them a key enemy will be a crucial but uneasy task for the government of Mr. Ahmed which signed strings of peace agreements with all rebel groups that had been fighting against the government for years.

Under the historic agreements with rebel groups and Eritrea, the Ethiopian government has handed back a territory claimed by Eritrea of its ownership, pardoned all rebel fighters, released political prisoners and dropped corruption charges against rebel leaders.