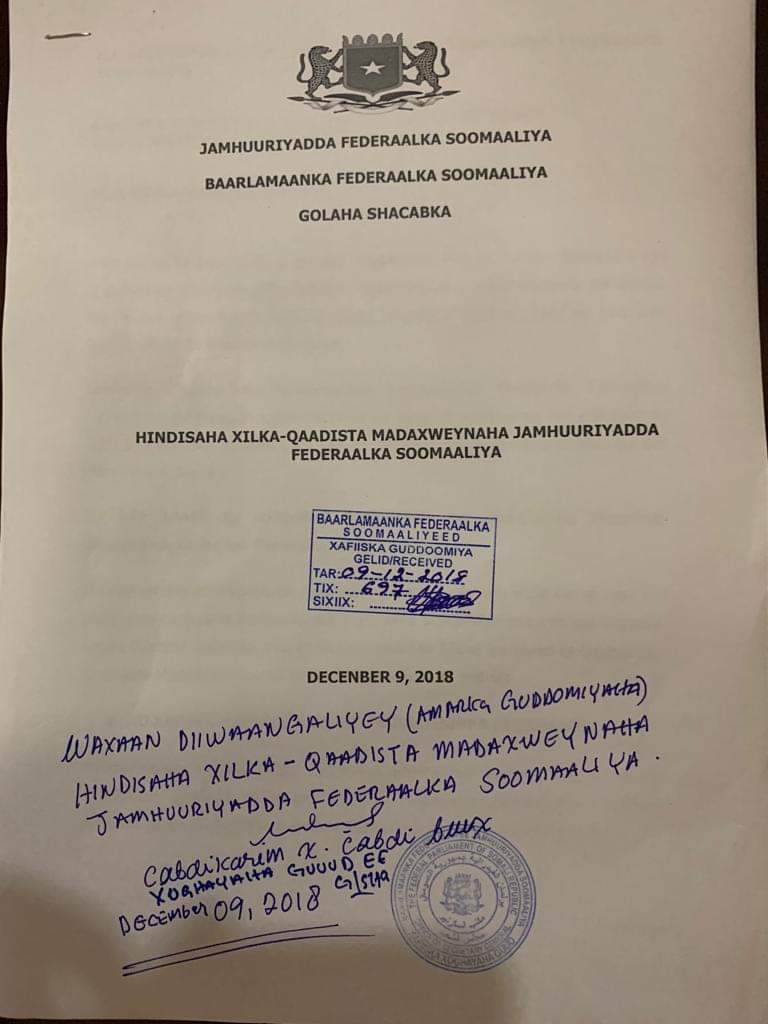 The Federal President of Somalia, Mohamed Abdullahi Farmajo is facing possible impeachment by federal parliament following a serious, 8-clause motion 92 MPs filed against the President and submitted to the House Chair, Sunday.

The members of parliament accuse the President of violating over a dozen articles of the Federal Constitution as well as a score of other national instruments among which are the country’s penal code and bylaws critical to security and defense.

The MPs say President Farmajo’s actions were not only pre-meditated but always self-serving in order to shore up an undemocratic, dictator-like grip on power totally disregarding proper, democratic procedures as expected of the highest office in Somalia.

Among the foremost areas which, according to the document submitted, the President stands accused of are violations on:

Elaborating on above, the MPs, specifically, underlined 8 critical areas branching off from above 5 major infringements, detailing in each which specific articles and instruments the President breached.

The MPs showed their displeasure of President Farmajo ceding use – and eventual takeover – of – 4 harbors on the Indian Ocean and the Red Sea in June 2018, followed by similarly toned ‘economic, political and security cooperation’ which the leaders of Somalia, Ethiopia and Eritrea signed in Asmara in September and Bahr Dar in November 2018. They also highlighted how the President handed over Ex-Colonel Abdikarim Qalbi-dhagah to Ethiopia and how he divested General Abdalla Abdalla of rank and expelled him of NISA – among other serious transgressions of the federal constitution by President Farmajo.

Villa Somalia’s open interference in federal-states ‘elections’, notably that of Puntland and Southwest, appear to have underscored a growing resentment of the kind of muscle-tactics which the President and his Prime Minister have been practicing on federal states. Villa Somalia, critics accuse, wishes to install puppet administrations in the regions and cannot countenance the least show of independence of mind on their part – a situation which precipitated the formation of the Inter-State Cooperation Council.

The impeachment will succeed only if two-thirds of the 275-member strong parliament votes in favor.

President Farmajo is expected to fight back but in what form/s this will come remains to be seen.