Home International Africa Could China squeeze the U.S. out of Djibouti – its only permanent... 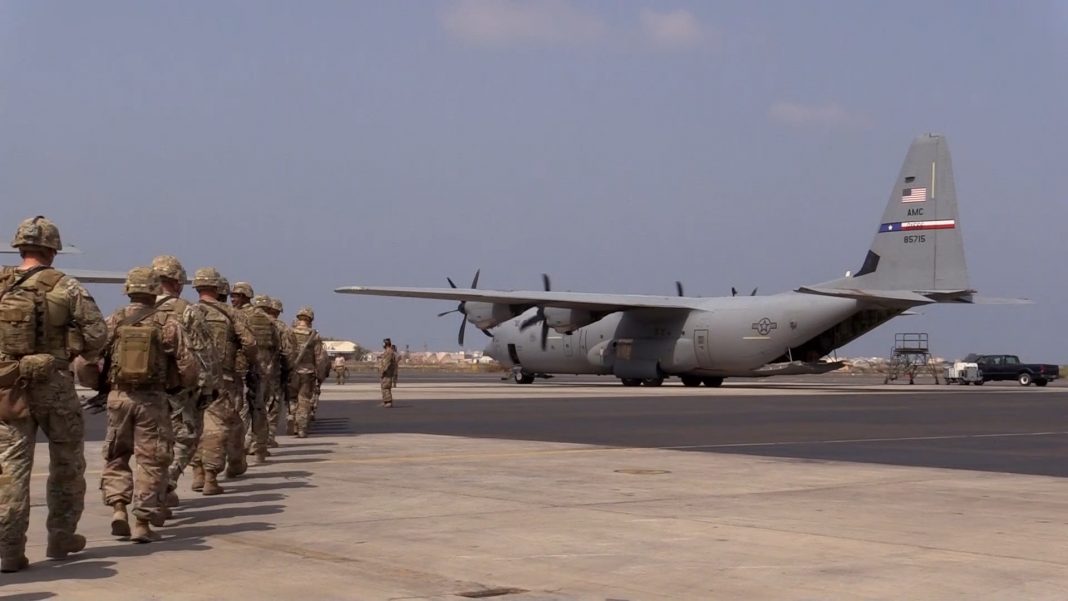 When unveiling the Trump administration’s new Africa policy on Thursday, national security adviser John Bolton made a point to speak about a single container port in the tiny East African nation of Djibouti. Officials say the Doraleh Container Terminal is critical for resupplying the only permanent U.S. base in Africa, and Bolton said China could take control of this port.

While Djibouti is slightly smaller than New Jersey and has a population of less than 1 million, its strategic location gives it an outsize influence. At the southern end of the Red Sea, Djibouti is on the shipping route between Asia and the Suez Canal. Every day an estimated 4.8 million barrels of oil transit the Bab el-Mandab strait adjacent to Djibouti.

Djibouti’s proximity to terrorist havens in Yemen and Somalia also made it an ideal location for the U.S. military. Camp Lemonnier, a former French foreign legion base, became an expeditionary base for counterterrorism operations after the terrorist attacks on Sept. 11, 2001. The base, which shares a runway with Djibouti’s only international airport, has grown significantly over the years.

The base houses thousands of military personnel to support operations in the region. The military reports killing approximately 254 al-Shabab militants through 32 airstrikes in Somalia this year so far. That is a significant increase over the approximately 150 Somali militants reportedly killed in the previous year. Djibouti is also adjacent to Yemen, where the United States has been supporting Saudi-led efforts against Houthi militants.

In October, the military announced $240 million worth of contracts for expansion of facilities that will include infrastructure to support the Air Force’s largest cargo jets. This is just part of the $1.4 billion plan for the base that the Pentagon announced in 2012. The Obama administration entered a 30-year lease for Camp Lemonnier in 2014 at a cost of $63 million per year.

While the United States and other countries have military interests in Djibouti, China has made major investments into the country’s infrastructure. This could help Djibouti be a node in China’s massive “One Belt, One Road” project to connect markets across Asia, Africa and Europe.

Djibouti’s external debt has increased significantly since 2014, and much of this is believed to be infrastructure loans from China. In 2017, China established a military base next to the Doraleh Multipurpose Port, another shipping terminal in Djibouti that it funded.

While there have been other concerns with China in Djibouti, such as accusations that China used lasers against American pilots in Djibouti, American officials have recently expressed concern over a port that was once operated by an external company but has been taken over by the Djibouti government.

The Doraleh Container Terminal opened in 2008 as a joint venture between DP World, an Emirati company, and the Djiboutian government. In February, the government canceled the agreement with DP World, and in September it nationalized the port.

Djiboutian business executive Abdourahman Boreh was instrumental in making the deal to create the Doraleh container terminal. The Djiboutian government claims Boreh was bribed by DP World to facilitate an unfair contract.

“We found out that there were imbalances in the contract to the point that we got convinced that the contract was signed in bad faith,” Djiboutian ambassador to the United States Mohamed Siad Douale told The Washington Post. Douale claims that DP World was diverting shipping traffic away from Djibouti, and he provided internal documentation showing that shipping traffic has increased by 33 percent following the termination of the contract in February.

In 2016, Boreh was cleared of wrongdoing by an international arbitration court in Britain. Boreh declined to speak to The Post about his involvement in the dispute over the Doraleh Container Terminal.

In September, the High Court in London issued an injunction against Djibouti in the dispute with DP World, but the government ignored this ruling.

“We did not recognized the arbitrator award to DP World because it was just unfair,” Douale said. He dismissed the notion that Djibouti would hand over control of the Doraleh Container Terminal to China.

“Djibouti is a sovereign state and Djibouti is in control of its ports,” Douale said. “Our sole intention is to build an economic future for our population.”

Some American officials are not convinced by such assurances.

“The Djiboutians are up to their neck in debt to China,” Reuben Brigety, former U.S. ambassador to the African Union told The Washington Post. Brigety said he expects this leverage to be used to force the Djiboutian government to hand control of the port to a Chinese company within the next six months.

“The Chinese will eventually use that enormously important strategic position to crowd out U.S. military operations,” Brigety said.

Handing over the operation of the port would not only allow China to constrain operations at Camp Lemonnier, Brigety explained, it would also have economic consequences in the region. The ports in Djibouti are a major transit point for goods shipped to Ethiopia, Africa’s second most populous country.

“The United States is asleep at the switch while all of this is happening,” Brigety said in November, before the Trump administration announced the new Africa strategy.

“China’s control of Doraleh could allow it to impede U.S. military operations in the Horn of Africa,” the letter stated.

“Anyone who believes that China is only concerned about the Indo-Pacific region is ignoring the clear evidence in Africa and elsewhere,” Thornberry said in a statement following a March tour of East Africa, which included a stop in Djibouti.

“It’s hard to overstate how concerned Chairman Thornberry is about this issue,” Claude H. Chafin, communications director for the House Armed Services Committee, told The Post.

The first pillar of the Trump administration’s new Africa strategy is advancing trade and commercial ties between the United States and Africa. While investment in Djibouti could increase American influence, China certainly has a head start.

Brigety already sees how the American interests could be impacted in Djibouti.

“It’s like a game of chess in which you can see checkmate five moves out, and if the United States does not take some action to reverse it in short order, our interests will absolutely be harmed, quite seriously.”