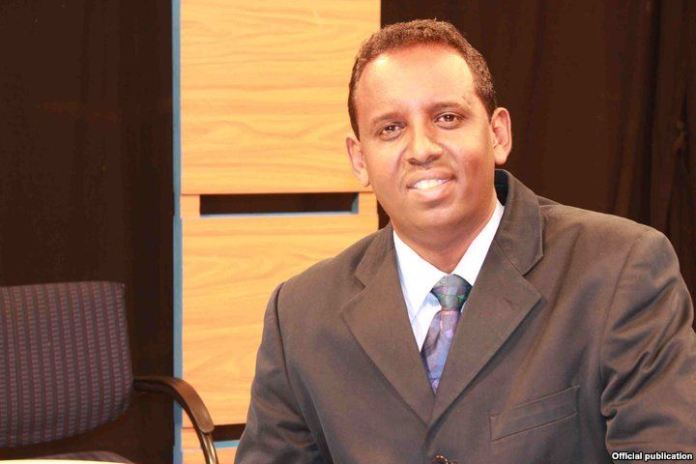 The announcement stated that the senior reporter died in the first of two blasts which shook the National Theatre area at central Mogadishu this morning.

Reports that surfaced of the blasts say Awil and three of his colleagues were driving by a checkpoint at the Theatre junction which forms the first checkpoint to one of two avenues leading to Villa Somalia when a suicide bomber blew it up.

Many are reported dead, and many more injured.

Among the lightly wounded are Federal Parliament Member Warsame Mohamed Hassan  ‘Jodah’ and Mohamed Abdullahi Tullah, Deputy Governor of Benadir, and the head of the Region’s security office.

Right at the heel of the first blast, a second followed.

Security forces cordoned off the area to both the public and cars, including ambulances. Consequently, nobody could give a complete account of what happened or how extensive the damage was.

Al Shabaab has, lately, picked up targeted explosions and killings in the capital of the weak, conflict-ridden federal government of Somalia. The Islamist fighters have, obviously, taken advantage of the amount of time and resources Villa Somalia preferred to put into winning regional, puppet seats where it should have placed security before and above any other consideration.

It is barely a month since the Group killed more than sixty persons in a daylight attack on Hotel Sahafi, Mogadishu, injuring more than 100.