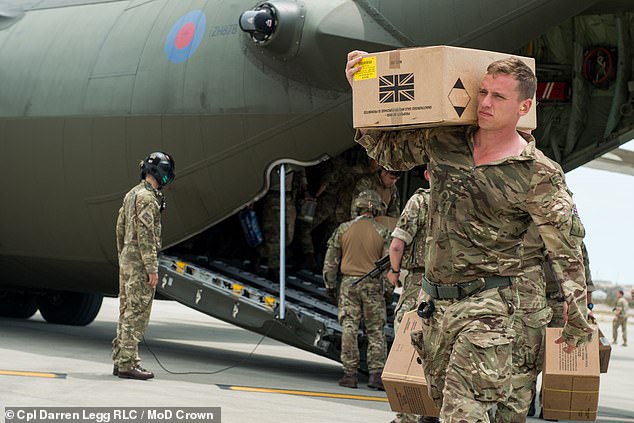 Major beneficiaries include Somalia and Syria, where Western aid has been appropriated by terrorist groups.

British aid to the world’s most corrupt countries leapt by more than 12 per cent last year, despite warnings much of it will be wasted, stolen or even seized by terrorists.

Analysis of official figures reveals the UK handed more than £1.53billion to the world’s 20 most corrupt countries – up from £1.36billion the previous year.

The £170million – 12 per cent –increase comes despite a string of aid money scandals. UK aid to the most corrupt nations has almost doubled in five years, rising from £814million in 2012.

The Department for International Development (Dfid) insists it takes a ‘zero tolerance’ approach to corruption and adopts extensive measures to prevent funds falling into the wrong hands.

In the worst cases, money is channelled through aid agencies rather than handed to governments to avoid it being siphoned off by corrupt ministers and officials.

But former Tory minister Robert Halfon said the figures underlined the case for abandoning the controversial target of spending 0.7 per cent of the UK’s income on aid.

Mr Halfon said: ‘At a time when people are struggling, it is extraordinary that we are sending even more hard-earned taxpayers’ money to corrupt countries where it is at risk of being diverted into the Swiss bank accounts of dictators and their cronies.

‘People are fed up with it. They don’t mind overseas aid but it has got out of hand. We should cut the aid budget in half and redistribute the money to the lower paid in this country through lower taxes and better services. We have got to get a grip on it.’

Respected think tank Transparency International produces an annual list of most corrupt countries. Analysis by the Daily Mail shows that Britain sends aid money to 17 of the worst 20.

Major beneficiaries include Somalia and Syria, where Western aid has been appropriated by terrorist groups.

In 2017, the Government was forced to suspend a £12million aid scheme to Syria amid revelations that the cash was at risk of going to jihadi groups.

A BBC Panorama investigation found that the Syrian branch of Al Qaeda had handpicked police officers benefiting from the justice and community security scheme.

Aid money sent to Somalia is also at risk of being ‘taxed’ by terror groups such as Al Shabab. An investigation by CNN last year found the murderous group was extorting thousands of pounds a day through roadblocks and ‘taxes’ on merchants supplying aid destined for refugees. 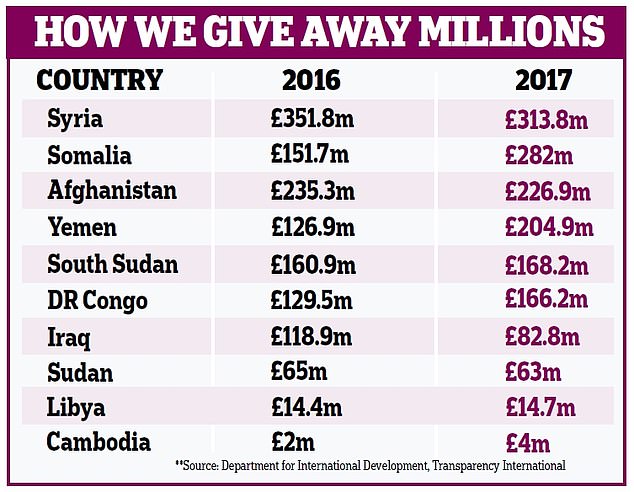 Analysis of official figures reveals the UK handed more than £1.53billion to the world’s 20 most corrupt countries – up from £1.36billion the previous year

An internal Dfid ‘risk register’ in 2017 concluded last year there was a ‘certain’ chance of funds being diverted by extremist groups. Despite this, British aid to the war-torn country, which is ranked the most corrupt on earth, almost doubled that year to £282million.

Other countries seeing major increases in funding included the Democratic Republic of Congo (DRC) – up 28.3 per cent rise to £166.2million – and the Yemen, which saw a 61.4 per cent rise.

The Yemen is on the brink of famine as a result of a civil war but a report this week found that food parcels are routinely being stolen by the Iranian-backed Houthi militia.

The UN World Food Programme has threatened to suspend aid shipments if Houthi rebels do not stop the theft and fraud.

The UK gave £40million to the programme’s overall budget in 2017. However, Dfid said UK money is not spent on food parcels in Yemen. Since April 2018, Dfid funds have only been used to provide food vouchers and cash transfers there.

But while some corrupt states have seen their funding soar, others have seen it cut.

Government embarrassment over revelations that North Korea was still receiving aid at the same time as threatening nuclear weapons has led to a clampdown.

A Dfid spokesman said: ‘Dfid does not provide UK aid directly to the governments of any of the most corrupt countries in the world. UK aid only goes to trusted partners. [It] makes us safer by tackling problems which would otherwise arrive on our doorstep.’

By JASON GROVES POLITICAL EDITOR FOR THE DAILY MAIL