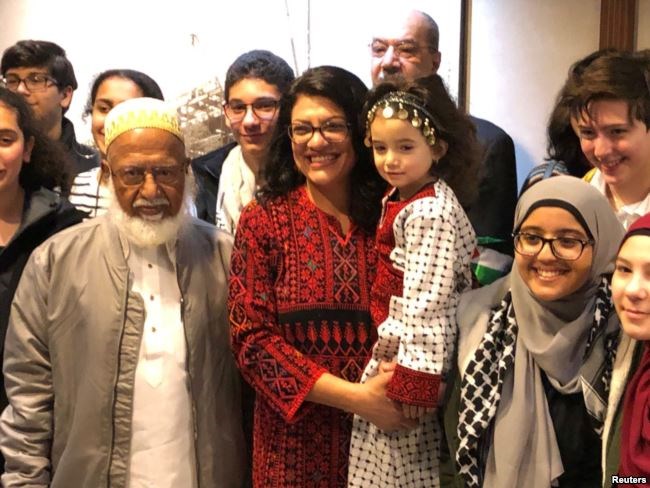 On Thursday, the first Muslim women to serve in Congress, Democrats Ilhan Omar of Minnesota and Rashida Tlaib of Michigan were sworn into office, as inspired young Muslim Americans and refugees watched closely. 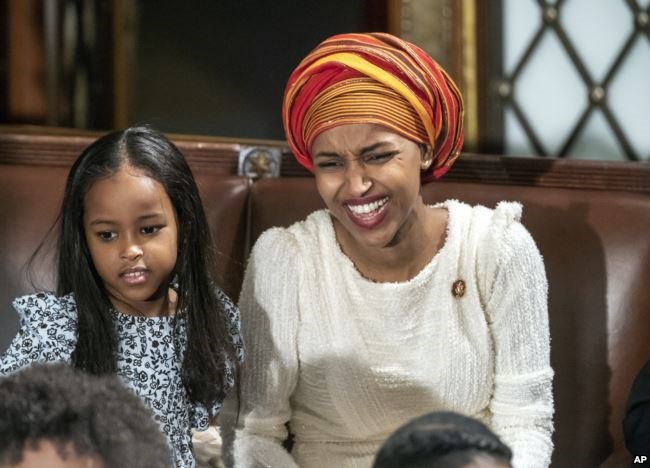 In the evening, a group of young Muslim men and women from Minnesota, Ohio and the Washington metropolitan area, were buzzing about the news as they gathered at an event in McLean, Virginia to celebrate Omar’s journey from Somali refugee to U.S. congresswoman.

At the event, Omar told the celebrating crowd the story of her arrival in the United States from the Dadaab refugee camp in Kenya 23 years ago.

Suud Olat, 28, a Somali-American, journalist and a refugee advocate, came to the U.S. five years ago as a refugee, escaping hopelessness and poverty in the same camps in Kenya where Omar spent four years before coming to America.

“In Trump era, when anti-immigrant and Muslim rhetoric is high, to witness Ilhan Omar who shares the same values and background with me, sitting in the Capitol Hill and celebrate with her was an amazing moment and inspirational for me,” he said.

Kowthar Yabarow, a 24-year-old of Somali heritage who chose to wear the hijab, sees the news of Omar as a reflection of her faith, community and belonging.

“Although my parents came from Somalia to this country, I was born and raised here as a Muslim girl and to see a hijabi Muslim woman like me in Congress is a big reflection,” she said.

Omer Arain, a 23-year-old Pakistani American, said, “It is very reassuring for young Muslim Americans like me that they can be in such positions of power.” 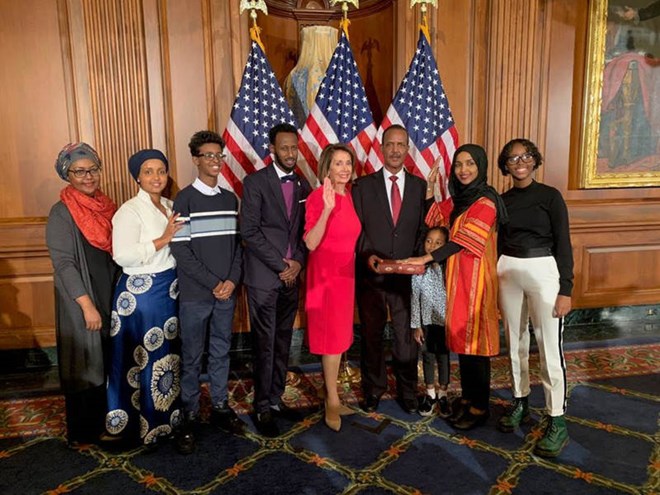 Ibrahim Ismail is a father of four. Like Omar, he came to the United States as a refugee in 1996 after fleeing the conflict in Somalia. His oldest daughter is now in a training school for new Virginia police recruits. He said the news about the two Muslim congresswomen meant something special for him.

“It is an inspiration and special for me that I can show, finally, to my daughter that, there is a Muslim woman like Ilhan Omar, an immigrant and a woman of color, a Somali, who is able to stand up for Muslim values, share them with the American public through a strong voice in the Congress,” he said.

“I am so proud to see people with my value like Omar and Tlaib being leaders in this country and I am happy that my daughter will grow up in an era where to have Muslim leaders in the U.S. politics is not news but a normal,” said Tahira Khanana, a 38-year-old mother of three with the Cincinnati chapter of the Council on American-Islamic Relations.

At Omar’s celebration, she focused on other issues. She noted that her celebration comes at a time the federal government remains partially shut down, and her homeland, Somalia, is still affected by Trump-imposed limits on immigration.

“I came from a country under our president’s immigration ban. If this was happening 23 years ago, I would not represent all of you in Congress today,” she said struggling to hide her tears.

She said one of her first tasks as a representative in Congress is to fight to end the shutdown.

“I came to Washington when our federal government remains shut down over “a silly border wall. I have to join the fight to reopen it,” she said.