Home International Africa Waiter Working At DusitD2 Recounts serving The Attackers One Of Whom Lived... 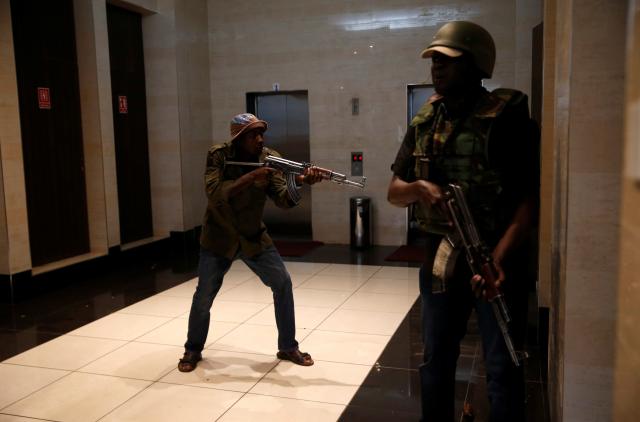 A waiter who works at the dusitD2 hotel located at the 14 Riverside Drive has recounted to the press how the attackers first came to the hotel as customers.

The waiter who was part of the people who were rescued by multi-agency security team effort on Tuesday night says that he remembers one of the attackers because he had a huge scar on his arm.

According to his testimony, the attackers had been to the hotel two days before the attack and he had served them coffee.

“I knew one of them because he had a big scar on one of his hands,” he said. “I saw them. They shot six of my friends, four didn’t die but two succumbed.” the waiter told Capital FM.

The attackers who spared him asked why Kenyan forces were killing ‘their brothers’ in Somalia before opening fire.

“Why are you killing our brothers and sisters in Somalia? They no longer attend Madrassa,” one of the attackers reportedly asked.

So far, over 50 people have been rescued overnight from the area which houses hostels, offices and a smattering of hotels.

This brings the number of those rescued to 174 according to a police source who spoke to the Nation Newspaper.

A communique from the Interior Ministry as of the night of Tuesday, January 15 said that police were mopping the crime scene and the situation was under control,

Early on the morning of Wednesday, January 16, heavy gunfire was reported at the Grosvenor Hotel in the Dusit office complex where police were engaging the attackers.

Police spokesperson Charles Owino told Citizen TV on phone that the area is still a crime scene while telling the public, especially politicians to stay away.

“Riverside Drive is still a crime scene and we are requesting people to keep off. We will give directions in the next one hour on how people will get information in regard to tracing their loved ones,” he told Waihiga Mwaura.

By Tonny Ndungu For Citizen Digital

One of the attackers had been  living at the Guango Estate, Ruaka, coughing up more than KSh 40,000 in monthly rent according to police reports shared with Citizen TV.

Officers who stormed house No E9 where the attacker had been living in discovered a hole in which a cache of weapons had been stashed.

A witness who claims to have been living next-door described the attacker as a friendly man who was cordial with his neighbors but was rarely in the house.

“He would normally say Hi to everyone but no one knew him well since he was always in and out of the house,” a witness told Citizen TV.

The car which was used in the attack and abandoned near the DusitD2’s  gate was recognized by neighbours who called the police following a circulation of images from the attack.

The house in question has since been cordoned off and officers are in pursuit of friends of the attacker to aid in probe.

A cache of weapons including guns and explosives has also been recovered from the bungalow.

Citizen Digital understands that anti-terror police are pursing the Estate’s landlord to help in the ongoing investigations.

Earlier in the day, president Uhuru Kenyatta in an address to the nation said that the terror threat had been neutralized and over 700 people rescued.

He also said that 14 people had perished in the attack with scores others sustaining injuries.

Citizen Digital previously reported that the attackers had visited the scene of the crime days before carrying out the heinous attack.

A waiter who spoke to the press recounted serving one of the attackers before the attack. Two days later, he was to see the same man spray six of  workmates at the hotel with bullets.