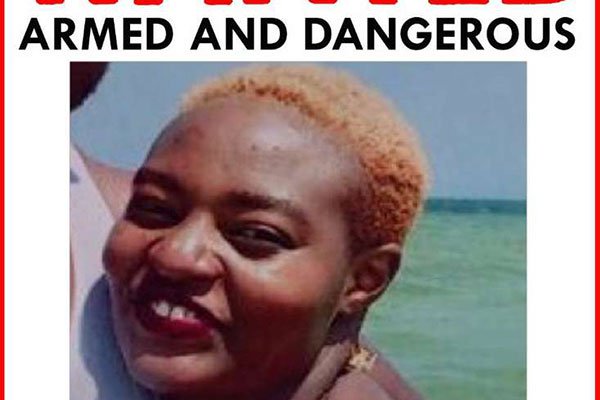 Violet Kemunto a.k.a. Khadija on most wanted terrorist list

Among them is Violet Kemunto Omwoyo (alias Khadija), who is believed to be the wife of Ali Salim Gichunge, one of the attackers killed by commandos at 14 Riverside Drive on Tuesday last week during the attack, which killed 21 people.

The name of one of the nine suspects, all of whom police warn are armed and dangerous, was not given last evening, even though his photograph was distributed.

Five terrorists are believed to have been killed when commandos stormed the business complex, bringing to an end a 12-hour siege.

The most wanted list came as the Nation learnt that three out of the five guns used in last week’s attack were initially bought by the Federal Government of Somalia.

A preliminary ballistic examination of the guns showed that their serial number markings, although partially erased, were similar to the ones used by the Somali security forces.

The source of two other guns used by the terrorists is yet to be identified.

Every government has a unique identification code on its weapons, and the guns recovered at 14 Riverside Drive bore the initials ‘SO’, usually used by the Somalia National Army (SNA).

The United Nations Security Council in November last year warned that military equipment purchased by the Somali Federal Government was being diverted to the armouries of rebel movements.

The arms, the UN continued, included many from a consignment received in mid-2017.

They are now believed to be in the possession of arms dealers in Mogadishu and Baidoa.

“Many such weapons were likely diverted piecemeal by unpaid members of the Somali security forces,” the UN cautioned.

The AK-47 rifles found at the 14 Riverside Complex are believed to have been ferried into the country by an unidentified woman, but Kenyan security agencies are yet to arrive at the exact dates when that happened.

Detectives are using the guns’ profiles and the identities of the attackers and their accomplices to establish whether there was a connection between Tuesday’s attack and another one foiled in February last year, when police arrested six people in Merti, Isiolo County, and recovered a deadly arsenal.

But even with the foiling of the attack last year, the UN security council in a November 9, 2018 report warned that some Al-Shabaab operatives who had escaped the police dragnet could be hiding in the country, plotting another episode of mayhem.

“While six individuals have been prosecuted in Kenya in connection with the operation, several known members of the plot escaped arrest,” the UN Monitoring Group on Somalia and Eritrea report cautioned, pointing out that “the attacking team — which likely comprised five individuals, on the basis of the number of captured rifles — may still be at large in Kenya”.

The UN confirmed that two of the five rifles recovered in Merti had been imported by the Federal Government of Somalia in 2013 following the partial lifting of an arms embargo effected under the Security Council’s resolution 2093.

Although investigations are yet to reveal if the weapons used in last week’s attack were also bought by the Somali government during the cessation of the embargo, those who spoke to the Nation on Sunday said the guns were indeed owned by the Federal Government.

“We are yet to know how the terrorists got them, but we believe they may have been seized from the police or army during one of Al-Shabaab’s many attacks against Somali government security forces,” an officer attached to the Directorate of Criminal Investigations (DCI) said.

He said the DCI is working closely with Somali security forces and the International Criminal Police Organisation (Interpol) to get more details regarding the guns and how they moved into Kenya.

Detectives believe there could be a link between the foiled attack last year and the one last week, as both of them were planned in Isiolo and the neighbouring Meru counties.

The vehicle, registered in Kenya, had crossed into the El Adde region of Somalia just a few days earlier.

Inspector-General of Police Joseph Boinnet said the suspects were planning a complex attack on major installations in Nairobi.

Mr Boinnet said that had the operation succeeded, it would have been the most significant attack by the Al-Qaeda-linked terrorist group outside Somalia since the 1998 bombing of the US embassy in Nairobi.

Other than the cache recovered from 14 Riverside Drive, police are also trying to find out if Ali Salim Gichunge (alias Farouk), who was a resident of Isiolo, was privy to the foiled attack last year since he immediately moved to Kiambu after the Merti arrests.

“He moved from Kulamawe in Isiolo Town to the quiet Mucatha neigbourhood of Ruaka, in Kiambu County, in March last year,” an officer attached to the Anti-Terrorism Police Unit (ATPU) told the Nation yesterday.

Call data records from two of Gichunge’s phones recovered from a car that was used to ferry attackers to the scene last week showed that he was in constant communication with a man the ATPU identified only as Eric, who is a resident of Maua in Meru. Eric’s national identity card was also found in the car.

Detectives said in an affidavit presented in a Nairobi court on Friday last week that the ID card had been used to register 12 mobile phone numbers.

Other than Eric’s, Ali Salim Gichunge’s ID card had been used to register three mobile phone numbers, while his wife’s had registered a total of six.

Officers from ATPU yesterday said they are tracing Gichunge’s movements since February last year when police seized the cache in Merti.

Since February year, police have received several intelligence warnings, including one dated October 25, 2018 that warned that Al-Shabaab operatives led by one Ahmed Harith Mahmoud were planning to attack a number of buildings within the central business district.

“Harith is an associate and logistician of Ahmed Imani Ali (alias Engineer), a Kenyan-born Al-Shabaab militant from Majengo, Nairobi, who is currently based in Somalia,” the warning read.

“He has been conducting reconnaissance on the targets for one month and has been working in collaboration with five others, among them a woman and four men.”

Detectives, in a bid to establish the movements of the attackers before they struck the Nairobi business complex last week, are also analysing closed circuit television (CCTV) footage from buildings and various roads in the city.

So far, more than 10 people have been arrested and more than 30 others interrogated over the attack.

On Friday last week, six people were arraigned, among them taxi drivers, an M-Pesa agent, a man who was in possession of a Ugandan national identification card, and a friend of one of the terror suspects.

Other people who have been arrested include the wife of suicide bomber Mahir Khalid Riziki, who was captured on CCTV cameras blowing himself up near Secret Garden Restaurant at the complex, moments before the other attackers opened fire.