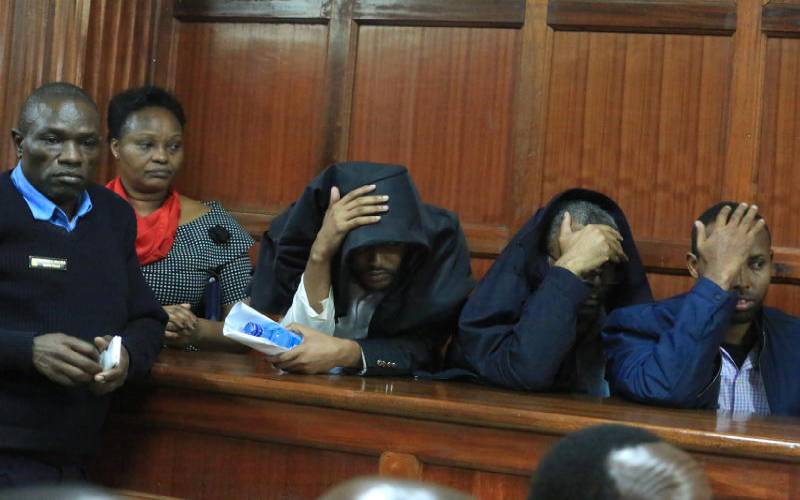 A suspect linked to the Dusit terror attack received Sh9 million from South Africa in three months and sent it to Somalia, the Anti-Terror Police Unit have said.

Twenty-one people, including a GSU officer, were killed in the January 15 attack.

The cash was received through M-Pesa.  Hassan Abdi Nur has 52 M-Pesa agent accounts. Forty-seven were registered between October and December last year, each with a SIM card. He used different IDs to register the SIM cards.

ATPU’s Inspector Monicah Githaiga on Wednesday said her team is in the process of obtaining the SIM cards subscriber details. These are the agents that received the money, which was later withdrawn at the Diamond Trust Bank, Eastleigh branch, before it was wired to Somalia.

Nur received the money using two handsets and made calls to Somalia immediately after receiving the cash.

He runs a tour firm and was arrested along Waiyaki Way, Westlands, on Tuesday. Four other suspects were arrested on Tuesday. They are lawyer Abdinoor Ismael, journalist Ismael Ambitham, Ali Khamis and businessman Faisal Mohamed.

Ismael, a graduate of Kenya School of Law and who is undergoing pupillage, has received over Sh100 million. The ATPU believes the cash was used to finance terrorism activities.

Ambitham was in constant communication with slain lead attacker Ali Salim Gichunge, who died during the attack and his spouse Violent Kemunto Omwoyo.

Githaiga yesterday said Ambitham’s phone led to his arrest on Tuesday after detectives established his communication with the Gichunges. The suspect works for Horizon TV as a social media representative.

Khamis is a marketing manager for the Horizon TV. He and Ambitham were in active communication with individuals in Somalia.

Mohamed, who runs a business, was in constant communication with both Nur and Gichunge. He is believed to have been contracted to deliver parcels to Dusit Hotel complex.

Detectives say during their investigations, they established Mohamed was involved in planning the Garissa University attack on April 2, 2015.

The manager of the bank where Nur was withdrawing the money,, Sophia Mbogo, was arrested for failing to report Nur’s suspicious transactions.

Nur is said to have made huge withdrawals in short intervals, which Mbogo ought to have reported to relevant authorities, but there is no indication she did so.

The ATPU was yesterday seeking 30 days custodial orders to continue with investigations. The anti-terror unit says all the six suspects were arrested for aiding and abetting the terrorist attack, especially facilitating the movement of finances.