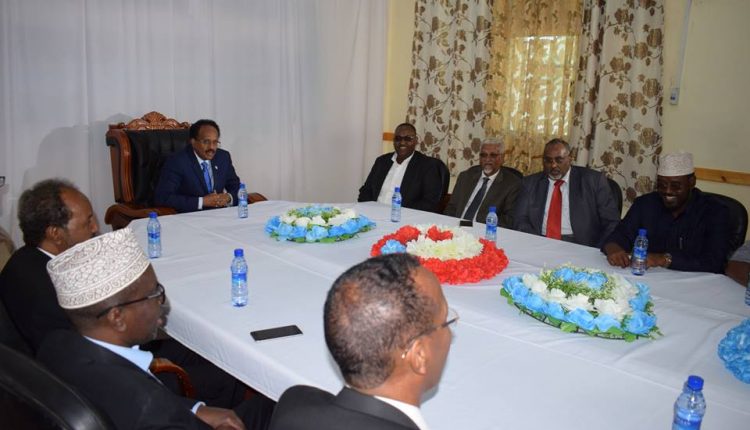 The newly instated president of the Puntland Federal State of Somalia, Saeed Abdullahi Deni, today, succeeded to bring together the Federal Somalia President, Mohamed Abdullahi Mohamed ‘Farmajo’, and his adversaries, the states’ presidents of Galmudug and Jubaland to a round table.

Mr. Deni, taking advantage of his relatively clean record as a federal state president, asked President Farmajo and the other Somalia States heads to iron out their differences at a working breakfast he threw on their honor for that purpose Sunday.

Federal and states leaders went to Garowe to participate in the inauguration of President Deni as the fifth head of the regional state Saturday.

Speaking at the ceremony last evening, President Farmajo asked for pardon and stated that he, henceforth, wished to open a new page with the federal states and that he would ‘only act as a neutral leader’ treating all states equally and without any rancor or motives that he promoted.

Understandably, President Deni saw an opportunity and seized it by the horns asking everybody to follow up on Farmajo’s professed undertaking on face value.

The get-together was, of course, made easier by the fact that Mr. Farmajo had only to contend with two of four out of five ‘presidents’ who finally severed cooperation with Villa Somalia – the federal seat – in September 2018. Puntland’s Abdiweli, who was, undeniably, the most potent voice among them was ousted by the 66-member parliament of Puntland on 8 January 2019, electing Mr Deni in his place. Sharif Hassan of Southwest left office and the helm of leadership passed to Abdiaziz Sheikh Mohamed Laftagareen whose ascension and the circumstances that led to saw the UN SRSG expelled, Mukhtar Robow arrested, more than a dozen civilians killed in violent demonstrations, and the ‘State’ capital, Baidoa, divided up to the present day.

Today’s meeting, if successfully concluded, will, if nothing else, serve as a starting point for more intensive future talks that may or may not resolve the fundamental critical issues basically revolving around power and resource sharing among the federal government and the five federal signatories of the federal constitution namely Puntland, Southwest, Hirshabelle, Galmudug and Jubaland states.