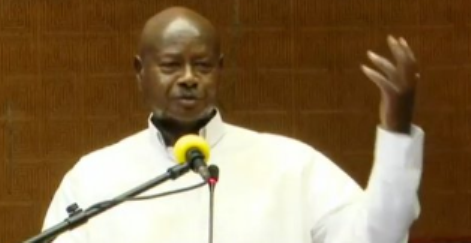 In a surprising statement, President Yoweri Museveni of Uganda said there were many countries that, however, did not function as full-blown states.

NTV Uganda quoted the President as saying “There are many countries that have no State”.

President Museveni went on to say that that those countries were physically there but had no organized authority neither over their people, their territory or the running of their ‘stately’ affairs in an orderly fashion acceptable to their neighbors and/or the international community.

“They are there but they have no organised authority that runs them, Somalia is one of them,” he said.

Looking at the thread of reactions – online and offline – to the Tweet, it appears like a majority of the Somali public reacted positively to the President Museveni’s comments calling it ‘forthright’ and ‘honest’. They say the president may go down in history as the first head of state to honestly portray Somalia for what it really is.

There are many countries that have no State. They are there but they have no organised authority that runs them, Somalia is one of them. There are others but I will not mention them for diplomatic reasons – President @KagutaMuseveni #NTVNews https://t.co/DrRiJNCUgG pic.twitter.com/EXQZBLVjgC

#Somalia and its president @M_Farmaajo humiliated on the international stage as President of Uganda @KagutaMuseveni mocks statehood of Somalia in a public address. Audience burst in laughter as Museveni names Somalia as an example of a country with no state authority. #Somaliland pic.twitter.com/WZiAxLIRgb

President Yoweri Museveni alluded to the existence of other countries that could be lumped together with Somalia in this sorry category, but that he would not mention them by name – for reasons he did not reveal.

“There are others but I will not mention them for diplomatic reasons,” Mr. Museveni said.

Trying to fill a gap which the ‘stateless’ Somalia authorities failed to act on, some clever bloke somewhere forged a response which, by its many misspellings, absence of stamp, and dearth of diplomatic suaveness, betrays its origin. “The Ministry of Foreign Affairs and International Cooperation herein declares that it suspended its relations with Uganda,” the crude retort stated.

It went on to say that ‘Somalia cautions international governments not to defract, impugn on Somalia sovereignty”.

Uganda was the first country to come to the aid of Somalia to give space to political and traditional leaders build ‘state’ organs. The UPDF pioneered the formation of the AMISOM peacekeeping troops by first arriving in 2007, and eventually building its troop presence in the country to 6,223 officers. Besides, the country had kept a police presence of 201 police officers in Somalia since 2010. AMISOM troops in Somalia by country, date deployed and number

Uganda, Kenya, Ethiopia, Burundi and Djibouti form the backbone of AU peace-keeping troops in Somalia. Sierra Leone has also contributed a number of troops for some time. Members of the Nigerian FPU (Formed Police Unit) in Somalia