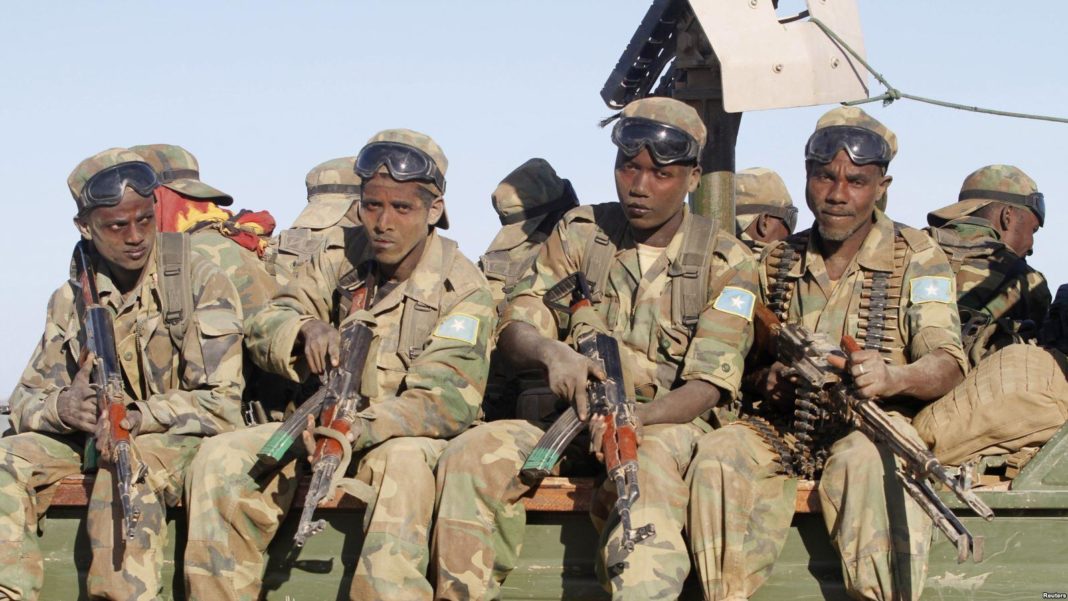 The saga of Somali National Army battalions leaving positions they manned in outlying regions, especially in Central and Lower Shabelle, flanking the Somalia capital on the south and southwest and the north, continues.

About 300 hundred more, driving 30 battlewagons//technicals and Toyota landcruisers of the type used by special units of the police, the paramilitary and the army, camped near the Somalia Custodial Corps Command on near the southern ex-Control checkpoint of the city, Wednesday.

Eyewitnesses and residents of the area said there was also a draggle of soldiers headed towards the city coming from the Lower Shabelle.

They said the troops showed the deprivation they revolted against. In many cases, residents quickly came to their help, bringing them what they could muster of food and water supplies.

The Somalia federal Government, apparently, has failed to convince the troops to stay in their garrisons promising them a swift resolution to outstanding issues.

Central to the mass mutinies of army units is pay.

Despite the millions which the international community has been pouring on the corruption-riddle Diaspora-bred leadership of the Federal Government, the army was not paid for the past four months. Neither was it supplied food supplies which made staying in barracks impossible for many.

Al Shabaab has, according to reports, taken advantage of the situation by swiftly taking over abandoned army posts. Other reports also indicate that the Islamist fighters have started trained fighters into the city strategically positioning them for multiple raids and seizure of key government facilities while security is still down and compromised.

AMISOM troops, who have enormously helped drive Al Shabaab fighters out of almost all major cities, are scheduled to gradually leave the country in the hands of the Somalia army and has already put its exit strategy underway.

To precipitate a security break, such as the one currently in progress, the Somalia army leaders have disparagingly called AMISOM soldiers cowards who were only good in hiding behind ill-equipped Somali soldiers. This latter development, observers point out, may explain why Al Shabaab did not meet any resistance on recent assaults on towns and on government building both in the capital and in surrounding towns such as Bal’ad and Afgooye – both of which are about 30 kilometers to the north and the west of Mogadishu proper.