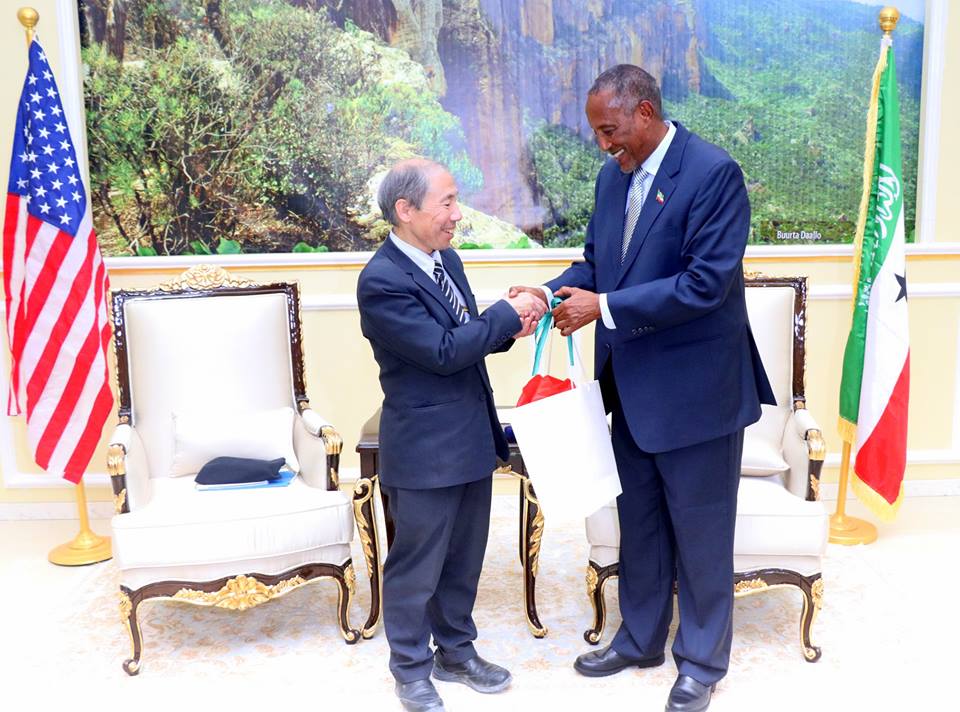 His Excellency the President of the Republic of Somaliland, Musa Bihi Abdi, today, received at his office at the Presidential Palace the United States Ambassador to ‘Somalia’ (and Somaliland), Donald Y Yamamoto.

With the Ambassador at the meeting were Ms Shella A. Billas, heading the Embassy’s trade and economy bureau, and Jeffrey Bakken, the USAID Somalia Mission Director.

The two sides discussed a number of issues related to the nation’s democratization process including the upcoming parliamentary elections, the seemingly stalemate among political parties on certain core – and not so core – areas, regional security, building on existing political and development relations between the two sides, the US support to a number of programmes in Somaliland, and a number of pertinent areas that had a bearing on the overall stability, peace and progress of Somaliland and the region, in general.

Their Excellencies the Ministers for Foreign Affairs and International Cooperation and Finance, Professor Yassin Hagi Mohamoud Hiir ‘Faratoon’ and Dr. Sa’ad Ali Shire, respectively, were present at the meeting in which President Bihi received Ambassador Yamamoto and the delegation he led.

This first visit of Ambassador Yamamoto’s to Somaliland appears to have taken some time to materialize, and only after trips he made to a number of Somalia federal states, but when it did, going by Tweets posted by the President’s office and the Minister of Foreign Affairs (as below) , discussions went well and were ticked off as in-depth and fruitful. Somaliland has been a de facto republic since 1991 and had never been part of the ‘Somalia’ Villa Somalia governs in Mogadishu.

The US Ambassador’s visit comes close behind other visits made to the country by ambassadors and high embassy officials from 7 countries and the EU – together and separately, simce April 2

The USAID side later met with the Minister, the Vice Minister and the Director-General of the Ministry of National Planning and Development at the ministry offices.

Met with Amb. Donald Y. Yamamoto from US.

Had a fruitful discussion on strengthening #Somaliland-US ties, elections, investment strategies of #US to #Somaliland, security, political dynamics in the Horn of Africa and the democratization process in #Somaliland. pic.twitter.com/hQqNsagtWM

Regional and global dynamics have changed drastically in the past year, in a way that places #Somaliland at the centre of a new Red Sea based politics. Hope this trip will set the stage for deeper collaboration between #Somaliland & the #US in the areas of security & investment. pic.twitter.com/NwlRThJ88b

President of the Republic of #Somaliland has today met with Ambassador Donald Yamamoto, United States Ambassador. Upcoming elections, the US government's Somaliland development interventions and the relations between the two countries were among the discussions. pic.twitter.com/PCEgUAWiEJ

US Ambassador to #Somalia with @USAIDSomalia, visited in Hargeisa Somaliland, where he met President @musebiihi. https://t.co/6q5OvIhz7e Both sides discussed issues related to regional security, Elections, Democratization and US Companies can invest Somaliland. pic.twitter.com/iKYQR4hDG2