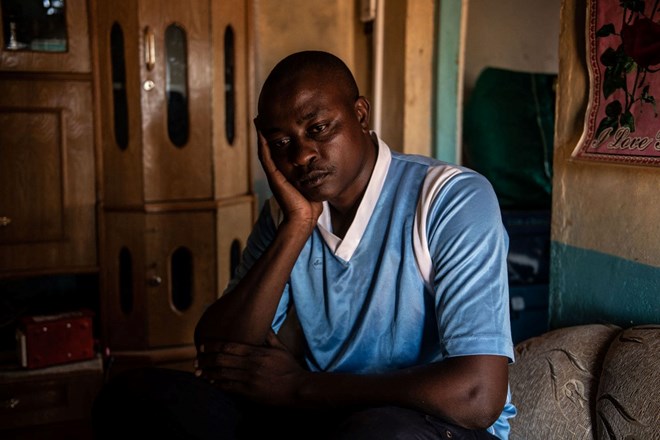 In the U.S.-backed war against the militant group al-Shabab in Somalia, Americans wage their battles mostly from the air, with unmanned drones.

On the ground, at sweltering checkpoints and in dusty trenches across Somalia’s southernmost states, soldiers from neighboring Kenya do almost all the fighting.

One of them was Christopher Katitu, a low-ranking grunt with the Kenyan Defence Forces, or KDF, who spent two years manning a mounted machine gun from a trench in Kismayo, a port city shattered by street-by-street skirmishes over territory. Then, when al-Shabab killed almost 150 students at a university just across the border in Garissa, Kenya, Katitu was sent to the edges of the tense city to guard a highway checkpoint day and night.

A kind of pressure was building up in his brain, one he could not quite place. It was not just the war — money problems were intensifying at home, too, and his wife was angry with him. Through almost a decade in the army, he had never seen a counselor.

On a short leave home from Garissa, Katitu had a mental breakdown. But instead of being treated for post-traumatic stress disorder, he was jailed and court-martialed when he tried to rejoin his battalion.

Since Kenya joined the war in Somalia in 2011, the United States has given its government more than half a billion dollars in security assistance. It comes with no stipulation that any of it is spent on mental health care for soldiers, but the U.S. military trains KDF doctors in mental health care. The KDF’s chief medical officer, George Ng’ang’a, said “if there’s one area where we’ve gone ahead, it is mental health care.”

But in interviews with former KDF doctors, mental health specialists and a dozen ex-KDF soldiers, a picture emerges of a system that has favored discipline over mental health care in the cases of hundreds of soldiers.

Criticism of the military in Kenya is taboo, and mental illness is rarely discussed both in the military and in society at large. Eight years into Kenya’s military foray in Somalia, hundreds of Kenyan soldiers have been killed, and dozens of al-Shabab attacks have taken place in Kenyan territory, some directed at KDF soldiers.

Kenya has around 4,000 troops in Somalia, which accounts for about one-fifth of the African Union contingent there.
The KDF says it conducts counseling services, but Ng’ang’a said in an interview that the KDF has no records on mental illness, nor does it have a dedicated mental health facility. He would not specify how many psychologists the KDF employs.

The U.S. Africa Command said it is “dedicated to supporting the development of capable, professional partner nation forces in Kenya.”

Katitu, the senior private who had a breakdown during leave, said he was not once offered an appointment with a counselor and did not know the option was available.

He was one year away from qualifying for a pension. His father, an ex-soldier, had died, and Katitu’s salary was supporting a large extended family. One day, his wife showed up at his barracks and said it was not enough. Katitu was granted a week to go home and figure out his finances.

“That’s when everything went black,” he said on a recent day at his family’s farm 100 miles east of Nairobi. “I only know about those weeks that passed from what people told me later — that I was babbling about bombs and Somalis and so on. I guess when you leave your barracks, that’s when everything hits you.”

Katitu’s blackout turned into a nightmare, in a story other former soldiers echoed. When he eventually reported for duty, he was stripped of his ID and phone, charged with desertion and locked in a cell for two years, awaiting a court-martial in which he was swiftly sentenced to six more months. For much of the time, his family did not know where he was.

It was only right before the trial that he met a psychologist for the first time in his life. The psychologist told the court-martial that Katitu exhibited signs of post-traumatic stress disorder. He was convicted of desertion anyway.

“We are just sent here and there to fight without any mental preparation,” said Katitu, now 32, who once trained alongside U.S. Army Rangers. “I have never said no to an order. How can I be a deserter?”
In June, a civilian judge sided with Katitu in an appeal of the court-martial.

“Again, tragically, instead of [Katitu’s] medical problem being resolved by medical intervention, a decision was made to look at his absence from work as a criminal matter,” Judge Luka Kimaru wrote in his ruling, a nonbinding decision that called for the KDF to reach a settlement with Katitu. Almost a year later, the KDF has not reached out to Katitu.
Maj. Lucy Mukuria, the KDF’s first psychologist, who is now retired, said she has spoken with at least 800 soldiers who suffered from symptoms typical of post-traumatic stress disorder who were disciplined instead of treated. Many who sought her help were demoted or discharged after commanders found out about their troubles.

“My reports were met by my superiors with disbelief,” she said. “Not once — not even once — was there follow-up. That crushed me. They are scared to admit there’s a problem, so they say you’re weak or incompetent and just try to get rid of you.”

Mukuria, who served for 11 years before her own struggle with mental illness led her to quit, has been the most outspoken voice demanding a cultural shift within the KDF. She devotes much of her time to organizing events for former soldiers suffering from PTSD, where she shares her own experience with mental illness.

“I tell them that I’ve spent days lying in bed, thinking about the slumping bodies, covered in fluids and maggots in half-zipped body bags,” she said. The worst memories come from the aftermath of an al-Shabab attack on a KDF outpost in El Adde, Somalia, three years ago that killed hundreds of soldiers. “The bodies, they came in trucks, you know, trucks. I haven’t been able to smell since then; I’ve lost that entirely.”

Outside of get-togethers like Mukuria’s, soldiers with mental illness who have been discharged have few affordable places to seek help. Iregi Mwenja runs the Psychiatric Disability Organization of Kenya, which has treated some ex-soldiers close to its center in the country’s Rift Valley, but for others, it’s just too far away.

“There’s no space for truth-telling on those bases,” he said. “The KDF treats soldiers like Western countries did during World War I.”

Mwenja, Mukuria and former soldiers said substance abuse and suicide were rife among those they treated or knew and described in painful detail how PTSD has ruined families and sparked violent outbursts.

Michael “Bush” Busolo is caring for his cousin Leonardo Shivachi these days. They grew up together and used to run with the same group of friends, but nowadays, Shivachi is unpredictable, going missing for weeks at a time. Drinking a bottle of cheap brandy on a recent night, Shivachi said that he had never seen a psychologist and that he was dismissed by a commander who thought he was “acting funny.”

“The bitterness controls him sometimes,” said Busolo, who lets Shivachi live in a converted chicken coop in his yard in the mostly Somali neighborhood of Eastleigh in Nairobi. “That’s when he sees snipers in the buildings across the street. When he tells me he could drink our Somali neighbor’s blood. When he’ll sleep for two days straight without eating. No one around him understands. People tell him that if he was a real man, he’d still be in the army.”

Some, like Katitu, are still holding on to the possibility that the KDF will compensate them or help them in some way. Isaac Heri, who was a lieutenant in Kenya’s Special Forces before he was dishonorably discharged for a violent outburst, said he did not want help; he just wanted the KDF to do better.

“I’m sitting here now, but my mind is in the bush, killing people,” he said. “The KDF will tell you there’s a system of care, but I don’t know anything about it. There was no counseling offered, even at my level. All I’m asking is for some recognition that the way I feel is not my fault.”

Africa bureau chief based in Nairobi