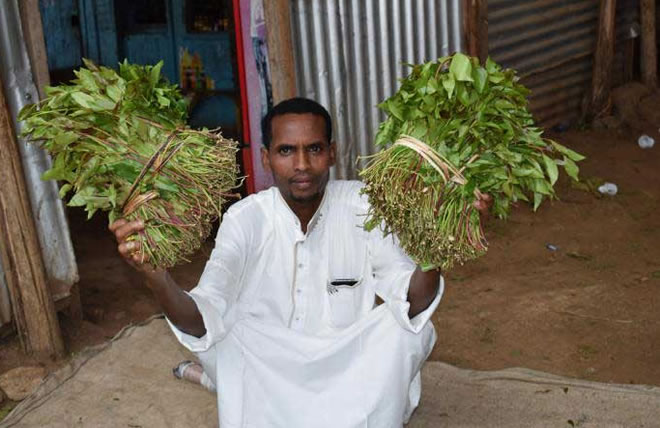 In 2017, Kemri, while citing a study carried out in Embu and Meru counties, had declared that miraa does not cause oral, sexual or mental health problems.

But publishing the same data last week in a scientific journal, the researchers said they found miraa to be a possible cause of mental health problems.

“Psychotic symptoms were significantly elevated in khat users in the study population,” said the report published last Tuesday in the journal BMC Psychiatry.

This is the first time since the data was collected in 2015 and presented at a scientific conference in 2017 that it has been published in a scientific journal.

In both instances, the scientists were citing data collected from 831 residents of Meru and Embu counties in 2015 in a study funded by the Government at Sh38 million.

Of the 831 study participants, 306 or about 37 per cent were found to chew miraa, with more than half being men.

About 14 per cent of children aged 10-17 were also found to chew miraa. This is described as worrisome because early initiation of substance use is linked to increased risk of drug-related diseases.

The study participants were also screened for use of other substances such as alcohol and tobacco.

The study reports a link between chewing miraa and symptoms indicative of mental problems that were independent of alcohol and or tobacco.

But last Thursday, Dr Evans Amukoye, deputy director of Kemri, told The Standard there was no contradiction in the two positions presented by the researchers.

He said in both cases, an association of mental illness and use of khat was found but when controlled for alcohol and other drug use, the link was not significant.

However, in the published report, the authors are specific that when they considered other factors such as age, sex, use of tobacco and alcohol, khat users were likely to report strange experiences and hallucinations.

In the initial presentation made at a scientific conference in Nairobi in 2017, lead investigator Prof Charles Mbakaya linked miraa to reduced appetite, low obesity and increased libido.

We could be condemning and ruining the reputation of a plant that has the potential of becoming a billion-dollar industry,” Prof Mbakaya, now with Rongo University, had said.

When last week in an email we asked Mbakaya about the contradictions, he said the raised issues are weighty and require time for an appropriate feedback.

However, the new study does not mention anything about khat improving sexual performance, appetite or reducing obesity.

The current report, while led by Kemri scientists, included other researchers from Moi, Eldoret and Rongo universities.