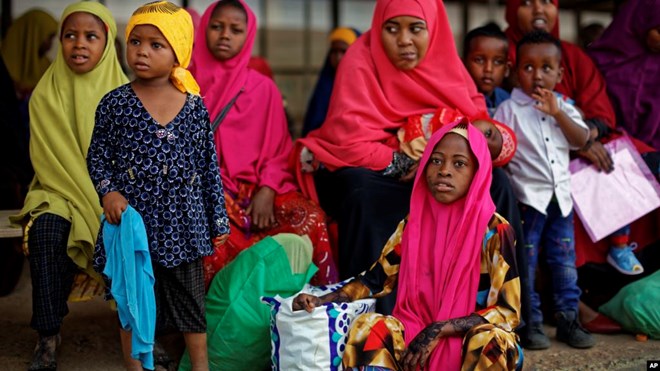 More than once in recent years, Kenyan officials have called for the closure of Dadaab refugee camp in eastern Kenya, home to more than 200,000 refugees and asylum seekers, many of whom fled Somalia during or since the 1991 civil war. In February, Kenya’s government wrote to the U.N. refugee agency, ordering the camp closed by mid-year.

The fate of thousands of refugees is in limbo.

Mohammed Aden says his parents fled Somalia’s Gedo region for Kenya 27 years ago. He was just three years old when they arrived at Dadaab.

Now 30, he says he was able to get an education, good health care, and a family of his own that knows no other home but Dadaab. And constant threats of its closure now gives them sleepless nights.

The camp would be closed by the end of August if the Kenyan plan is followed through.

The United Nations refugee agency says it is working with the Kenyan government to provide “solutions.”

Speaking to reporters, UNHCR Kenya representative Fathiaa Abdallah noted that Dadaab camp “has been in life since 1992.”

“There are generations born in Dadaab and there is a large number of refugees living in Dadaab, more than 280,000,” she said. “Therefore we are looking for a solution. Everyone agrees that we should have a solution for that situation. A solution lies in different strategies, one, the voluntary repatriation to Somalia. You know the majority of refugees in Dadaab are from Somalia and that program is ongoing.”

Abdallah said relocation of some of the refugees to other parts of Kenya is another option.

“We are hoping to relocate some of the refugees in Dadaab to Kakuma, and again that is something we will not force,” she said. “We will talk to them and see who would like to be relocated to Kakuma because we have an office there and we have a program there as well and this is all jointly with the government.”

Aden, like some of the refugees VOA spoke to, hopes his family will get resettled to a third country instead of being “plucked” from their “home” to different part of Kenya.

Abdallah says the UNHCR is listening.

“Many of the refugees outside express that they would like to be resettled,” she said. “And that is something I said earlier is not in our hands. It is a small number, it takes longer and it is for all vulnerable refugees, but we try our best to address that.”

In 2016, the Kenyan government said it would close Dadaab, asserting it was there that the 2013 Westgate terror attack was planned.

But in 2017, Kenya’s High Court said the move was unconstitutional and a violation of the U.N. Convention on refugees.

After the attack on the Dusit D2 hotel complex in Nairobi in January, there were fresh calls to close Dadaab. Twelve of the suspects linked to the attack were arrested in Dadaab.

For Aden, his request to the Kenyan government is that they hold off closing the camp at least until peace returns to his country.