Home World News/International Africa Gulf’s Involvement in Horn of Africa Can be Seen as Both a... 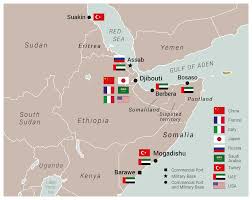 For several decades, the Horn of Africa has been at the center of global attention on account of protracted armed conflicts, large-scale displacements, and severe food crisis. Multiple cross-border flows of violence and instability have undermined state-based approaches to conflict resolution and management.

Things have however started to change now. The Horn of Africa currently represents a departure from the past. Ethiopia is undergoing sweeping political transition with a double-digit economic growth. It’s about time that an inward-looking Eritrea, long ostracized for its human rights records, has been relieved of United Nations sanctions. Ethiopia-Eritrea rapprochement by opening its borders has been a positive development. While Eritrea has signed declaration of peace and cooperation with Djibouti and Somalia, Sudan has also managed to mend its relation with Egypt and get US sanctions lifted.

The sweeping transformations across the Horn of Africa are taking place at a time when Middle Eastern countries’ are beginning to assert themselves in the region. International interest and increased geo-strategic significance of Red Sea is driving unprecedented development and competition. Nations that have so far maintained peaceful bilateral relationships are now engaging in an unpredictable game. Flurry of recent economic and military investments is reshaping the geopolitical dynamics on both sides of the Red Sea. Cash-rich Gulf states are heavily investing on seaports and military outposts along the Red Sea coast. These massive investments are a part of Gulf States larger efforts to redefine the regional order and assert themselves as players on a global stage.

The sweeping transformations across the Horn of Africa are taking place at a time when Middle Eastern countries’ are beginning to assert themselves in the region.

Gulf investments have been essentially driven by three main groups that are vying for influence in the Horn: the Arab axis (led by Saudi Arabia and UAE, but including Egypt and Bahrain); the Iran axis; and the Qatar-Turkey axis.

The Arab axis in Horn of Africa:

The UAE and Saudi Arabia axis have been the busiest in Horn of Africa region as evidenced by their role in brokering the Ethiopia-Eritrea peace deal. The ceremony took place in Jeddah, on Saudi Arabia’s Red Sea coast, as traditional regional powerbrokers like US and African Union remained absent. The deal has both economic and strategic layers. UAE’s desire to find a new partner in the Horn coincided with the charismatic Abiy Ahmed becoming Prime Minister of Ethiopia back in April 2018. Abiy has repeatedly emphasised on privatisation and port development in order to unleash the potential of Ethiopia. However, lack of sea access and the continuing dependence on Djibouti has remained Ethiopia’s primary concern. Abu Dhabi continues to provide Ethiopia with huge loans, investment, and infrastructure support and has also pledged USD 3 billion. Out of this, USD 1 billion would be deposited to Ethiopia’s National Bank in order to help with its forex crisis.

The UAE and Saudi Arabia axis have been the busiest in Horn of Africa region as evidenced by their role in brokering the Ethiopia-Eritrea peace deal.

With Eritrea, both UAE and Saudi Arabia have assured Asmara of lobbying to lift international sanctions. The rapprochement between Asmara and Addis Ababa has also raised the possibility of rehabilitating Eritrean ports of Assab and Massawa. UAE still continues to use port of Assab to bomb Yemen’s port of Hodeida. If sanctions are lifted from Eritrea, then the port of Assab which has been modernised only for military sorties, can certainly be the next port to go to market for commercial development.

On other hand, UAE’s long-standing involvement in Djibouti is diminishing as China continues to make inroads. China is constructing container and cargo facilities in the form of $590 million Multi-Purpose Port (MPP) at Doraleh, managed by China Merchants Group (CMG). However, until the opening of MPP in Djibouti, the Doraleh Container Terminal (DCT) facility was managed and partly-owned by Dubai-based logistics giant DP World since 2008. However, in February last year, Djibouti unilaterally terminated its contract and nationalized its 33% shareholding which prompted  a long-drawn legal battle between Djibouti and UAE. In the meantime, UAE through DP World continues to increase its stake in neighboring ports. DP World has secured contracts worth hundreds of millions of dollars to develop the ports in Berbera and Bosaso, located in the semi-autonomous region of Somaliland and Puntland respectively. In the Berbera port project, Ethiopia is going to own 19% share, DP World 51% share, and the Somaliland government 30% share. UAE’s armed forces are present in Berbera and is also reportedly discussing the development of Kismayo, in Jubbaland federal state, over the Somali federal government’s objections.

Presently, the Arab axis’s scramble for influence in Horn of Africa continues to be driven by geo-security imperatives: prepositioning for a potential future conflict with Iran.

Iran’s influence in Horn of Africa:

Iran’s relation with African states on Red Sea and Gulf of Aden have been strategically significant as it offers the capacity to control transport via Bab el-Mandeb strait and help in combatting piracy and further pressurizing the Arab axis, especially Saudi Arabia. Sudan has been Iran’s most important partner in the region with both of them entering into a military cooperation agreement. However, Saudi Arabia in 2014 freezed banking cooperation with Sudan which pressurized Sudan to close its Iranian cultural centers. In 2015, Sudan joined Saudi-led coalition in Yemen in its fight against Iranian-backed Houthis. Iran’s influence in Eritrea also started to diminish from 2015 onwards with UAE and Saudi Arabia’s offer to ease the impact of sanctions and offers of military supplies and investments in infrastructure. The UAE now also has a military base in Eritrea. Iran has additionally sought to utilize the territories of Somalia and Djibouti given its proximity to Yemen. However, Iran’s development aid to these states were modest which led to Djibouti, Sudan, and Somalia breaking off diplomatic ties with Iran back in 2016.

Although Iran’s attempts to gain a foothold in the Horn of Africa region may indeed be possible, rebuilding its influence to the pre-Yemen war level remains far-fetched. American sanctions have hampered Iran’s economic interests in Africa severely. Moreover, Riyadh and Abu Dhabi’s engagement in the Horn continues to be informed by their determination to isolate Iran and ensure it does not gain a foothold in the region and wins back its previous allies like Sudan and Eritrea.

The Gulf crisis has helped bolster relations between the third axis, Qatar and Turkey. Turkey is known as Somalia’s leading economic partner that not only manages the capital’s ports and airports but also has a military base. Further, Turkey recently signed an agreement with Sudan to rebuild the Suakin Island (a former Ottoman territory) – which would boost tourism, serve as a transit point for pilgrims travelling to the holy city of Mecca, and would also enable Turkey to have a military presence in the Red Sea to fight against terrorism.

Turkey is known as Somalia’s leading economic partner that not only manages the capital’s ports and airports but also has a military base.

Qatar on other hand has reportedly helped finance President Mohammad Farmajoo’s election campaign. With UAE retreating from Somalia, Qatar has ventured in to fill up the vacuum by launching investments in Mogadishu and extending its support to Somalia’s forces. In early 2019, Qatar supplied 68 armored vehicles to strengthen Somalia’s military in its fight against Islamist insurgencies.

The clash between the Arab axis driven by UAE and Saudi Arabia and the Qatar-Turkey axis with tacit support from Iran, has spilled over into the Horn of Africa. The Qatar-Gulf rift has impacted negatively on countries in the Horn like Somalia and Sudan who were compelled to acclimate to the conflicted dynamics as the rivalry heated up. A prolonged Gulf Cooperation Council (GCC) could have had a detrimental impact on regional stability and further disrupted the smooth flow of global sea route trade. While there may be short-term gains for outside powers, over time everyone stands to lose from greater Horn instability.

Gulf’s involvement in Horn of Africa can be seen as both a boon and a curse. While the internationalisation of Yemen war and the Gulf’s crisis has provided cash-strapped regimes a source of ready cash and diplomatic support for governments in the region, at the same time it has placed fragile peace arrangements and investment projects in the Horn at risk.

Although numerous African governments have seized opportunities and managed to secure huge investment deals, their relatively weaker positions have meant that most have been forced to take sides when required. Therefore, African countries should attempt to resist unwarranted interferences in their internal policy decisions and insist on their sovereignty being upheld. African countries needs to leverage their geo-strategic significance and balance their relationships with various players in the region in order to attract much-needed investments and get the best deal for themselves.

While Gulf investments accrues short to medium-term advantages to African countries, any long-term change in Horn of Africa will ultimately depend on how these African states are able to manage their asymmetric relationship with Gulf countries.