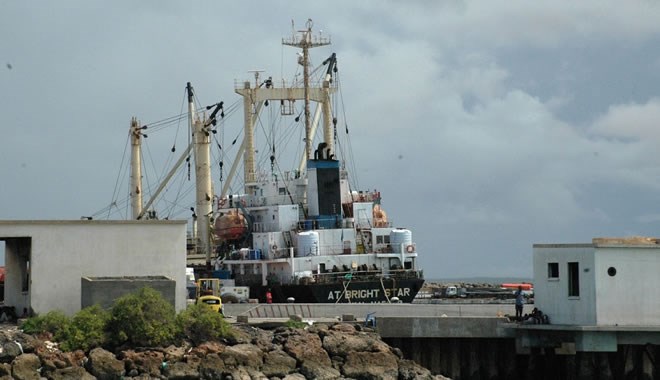 The liberation of the seaport code-named Operation Sledge Hammer saw KDF launch both air, land and sea assaults to wrestle the group that had taken over operations at the port.

This operation, which was a defining moment for Kenya’s uniformed men and women, marked the turning point of Operation Linda Nchi that announced Kenya’s entry into Somalia to crash the Al Shabaab

Kismayo is a port city in the southern Lower Juba province of Somalia.

It is the commercial capital of the autonomous Jubaland region.

The city is situated 528 kilometres southwest of Mogadishu, near the mouth of the Jubba River, where the waters empty into the Somali Sea.

Throughout 2007 and 2008, Al Shabaab scored military victories, seizing control of key towns and ports in both central and southern Somalia.

By January 2009, the group and other militias had managed to force the Ethiopian troops to retreat, leaving behind an under-equipped African Union peacekeeping force to assist the Transitional Federal Government’s troops.

In October 2011, a coordinated operation between the  Somali and Kenyan military began against Al Shabaab in southern Somalia

The mission was officially led by the Somali army, with the Kenyan forces providing a supporting role.

Kismayo was regarded as Al Shabaab’s last major stronghold on account of the revenue that the group was able to generate for itself through exporting charcoal and levying port taxes on imported goods.

KDF’s offensive assault thus represented a major, morale-dampening loss for the rebel group that was forced to retreat with massive casualties.

The then KDF’s spokesperson (now government spokesman) Cyrus Oguna says capturing the city signaled the end of Al Shabaab because Kismayo was the bastion which financed their activities.

Seven years later, the small town with a population of about 190,000 people is slowly rising from the ashes of war.

This is a clear indication that KDF’s presence within the area under sector six has had a great impact on the lives of the residents.

Sector six is under joint operation of KDF and Ethiopian forces.

Despite the new breath, a sad reality of KDF planning to exit by 2021 has started taking shape.

So far the troops under Amisom have started gearing up on an exit plan that will see Somalia National Defence Forces take over.

According to the Commanding Officer in charge of the  infantry battalion in Kismayo, Lieutenant Colonel Meshack Kishoyian, Amisom developed operations guidelines that run between 2018-2021.

In the guidelines he said there is a clear breakdown on how the Amisom troops should operate towards a gradual handover to the Somalia forces.

Though the guidelines known as Concept of Operations (Conops) do not indicate an actual date when the troops exit in 2021, Kishoyian said they have already embarked on mentoring of Somali forces through joint operations that will see them take over.

“We are conducting joint offensive operations to degrade Al Shabaab. For now we ensure that Somalia forces are on front line as we support them to remain tactical and professional,” he said.

This he said is key to helping the Somali forces understand the scope of operations and the type of the enemy they are dealing with.

According to Conops the exit will be conducted gradually to allow a smooth transition.

“We are conducting our mission here in accordance with Amisom guidelines, our exit will depend on AMISOM’s assesment of how the situation will be. If they will advise we extend our mission then we are ready to undertake any assignment under the guidelines,” he said.

Top military commanders under Amisom in February met and agreed on key operations and activities to be executed under the Mission’s new Conops, approved late last year by the Military Operations Coordination Committee (MOCC).

The MOCC comprises of Chiefs of Defence Staff and designated representatives of Troop and Police Contributing Countries, the Federal Government of Somalia, the UN, development partners, and the AU Peace and Security Council.

They agreed that military activities which include targeted operations against Al Shabaab to flush them out of their hideouts, will be implemented in phases.

This is likely going to see the troops launch a Kismayo-like capture against Jilib which is the only remaining town under Al Shabaab.

“The activities will consist of comprehensive operations in support of the Somalia Transition Plan and will include stability operations targeting Al Shabaab hideouts and enhancing protection of population centres,” Simon Mulongo, the Deputy Special Representative of the Chairperson of the African Union Commission (DSRCC) for Somalia said.

The Somalia Transition Plan will be implemented in three phases.

Activities to be undertaken under the plan, includes the phased and conditions-based troops’ withdrawal and handing over of priority locations in Mogadishu to the Somali Security Forces, in the short term.

Degrading of Al Shabaab and securing main supply routes and support to the Somali National Security Forces as they take full charge of the country’s national security responsibilities will be priorities under the midterm and long term objectives.

Lt Col Kishoyian underscores the importance of the liberation of Kismayo in keeping Kenya safe.

He told journalists that since the capture of the town, his teams with hands firmly on the trigger, have been working around the clock to ensure the town is safe.

“In 2012 I was a junior officer when we fought the militants. It was real war. We were in an enemy’s territory  and we could not trust anyone,” he narrated.

He added, “Then we could shoot at anything that was moving. We suffered several casualties but our spirits were high, we were determined and our efforts saw inflict more pain to the Al Ashabaab in a hot pursuit that brought victory”.

Kishoyian said the capture has remained one of KDF’s major victories in the enemy’s territory.

“Staying here as the Commanding Officer gives me a lot of memories of where Kismayo was. For now the town is a 24 hour economy, women and children can walk on the road for day to day businesses and for sure, Kismayo is a true reflection of what Somalia can become if the terrorists are completely eliminated,” he said.

According to him, their main objective after the capture has been to ensure Kismayo and its environments are safe and secure to allow its people rebuilds their lives.

He said their operational area is divided into two sub sectors; North and South.

“Our mission is to support the Somalia security forces by conducting targeted offensive operations within Sector Six to disrupt and defeat Al Shabaab,” he said.

Port Manager Ahmed Haji Adan told reporters that KDF has played a major role in ensuring that the port is fully in operation.

He said though the operations of the port fully falls under Juba Land state, KDF has provided technical assistance and security surveillance.

Adan who fought alongside Kishoyian in capturing the port said if it were not for KDF the port would have gone to the dogs.

“They have been here with us. I know Kishoyian because we fought together. He is the CO and I was made the manager of the port. We have had a cordial relationship and an organised joint operation since then,” he said.

Adan said the port is now in operation 24/7 and they plan to expand its exports’ operations.

He said with a new Sayid Mohammed Abdule Hassan Airport, banks, M-Pesa shops and streets bursting with activities are a reality that Somalia can rise to.

Adan however says their main worry is the exit of Amisom.

He said for instance though Kismayu is liberated, the entire region of lower Juba is still under threat of Al Shabaab and with Amisom exiting, the town is likely going to be invaded.

“We still have weak systems. Our security is not yet at the point where it can effectively handle the terrorists. Our port is just picking up and the town rising. Amisom should rework on the guidelines and see if there is need for an extension of their mission,” Adan said.

Captain Anthony Kibet commanding the boat unit at Port Said their main role is to inspect every moving outbound and inbound vessels at the sea.

These includes fishing boats to cargo vessels before the goods dock at the port.

“We coordinate our activities with the Jubaland administration within the Kismayo seaport. We usually check on the vessels that come in depending on the intelligence that we get,” he said.

Kibet said Amisom has well laid out rules of engagement for vessels suspected to be in possession of suspected goods like ammunition and weapons.

He said for instance, the terrorists disguise themselves as women by wearing hijabs, niqabs, chadoras and burqas which has made it difficult for KDF to identify them.

“They have devised new ways of survival. They know that we shall be on the spot over killings of women and children so they use them as human shields. Under Amisom’s guidelines we cannot attack innocent women and children,” Kishoyian said.

Kishoyian said KDF troops are working to degrade the Al Shabaab outside the environs of Kismayo through offensive operations.

The biggest challenge has however been the improvised explosive devices the militia have planted in main suply routes to disrupt operations.

This he said has affected their operations forcing the troops to operate with extra caution.

“What we have done is mounted variuos road blocks and maintained clear visibility on major roads which allows us to detect any traps,” he said.

He said though the the terrorist now use self-drive cars planted with grenades and IED’s to target the troops, they have an advance team that moves to ensure the other soldiers are well secured against such ambushes.

Major Justus Cheboi, Officer Commanding  the old airport, said their main duty now involves securing the road linking the new airport and the old one that passes through Kismayo town.

He said they focus more on degrading the military capability of the Al Shabaab and ensure that they are not active in their area of responsibility.

“We also ensure that anything coming into Kismayo is thoroughly screened and ensure the road is free from any harmful material like IEDs and any ambushes from the enemy,” he said.

Cheboi said this ensures that United Nations agencies are able to deliver humanitarian aid to the Internally Displaced Persons (IDPs) within Kismayo town.

The other challenge has been that some residents are not willing to share information about the groups.

This is worsened by the fact that the fighters belong to the communities and the families feel betrayed when information about them is shared.

“Sometimes it is difficult for us to trace the militia because some families cover for them,” Kishoyian said.

He said since Jilib remains the stronghold for the group, they have no access to essential needs like food, water and medication forcing them to sneak back in areas like Kismayo and Mogadishu.

“Jilib is completely a landlocked area. The only way they can access services is through the port. Many have secretly been sneaked in by their families and what they are doing is imposing taxes on the residents,” He said.

Sources indicate that the group is currently taxing those with businesses and those that own more than three livestock.

They then collect the money, buy food items and other essential commodities which is then ferried to them.

According to Kishoyian, they have had to device ways to integrate with the society so that intelligence can be shared to them.

“Initially it was a great challenge because it was perceived that it was us against them. This has changed over time. You find our soldiers playing with the kids and freely interacting with the society. This has helped us gather critical information,” he said.

Amid all the challenges, KDF has now embarked on an operation that will see all the supply routes the groups are using are completely closed and cut.

This they say will completely neutralise Al Shabaab’s operations.