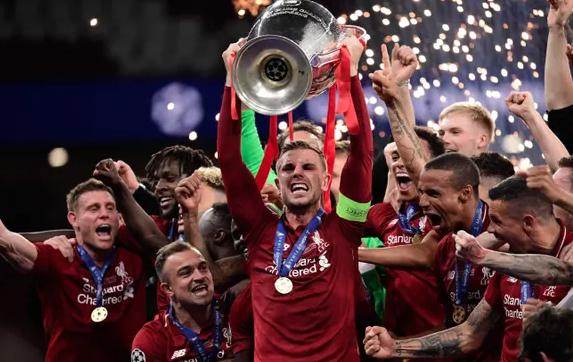 By the end, it was difficult to think any of the Liverpool supporters would care too greatly that the kaleidoscope of nostalgic banners they had brought to Madrid were already looking a little out of date. Liverpool had their sixth star and when we see them again next season we can be sure they will have added “Madrid, 2019” to the red, yellow and white flags that have been fluttering from Spanish balconies, hotel windows and lamp-posts in memory of Istanbul, 2005, as well as Rome, 1977 and 1984, plus Wembley, 1978, and Paris, 1981.

For Liverpool, such devoted collectors of trophies, it was the sixth time in their prodigious history that the club’s ribbons have been attached to that shiny old pot. There is only Real Madrid, with 13, and Milan, on seven, with a superior record and when Jordan Henderson lifted the trophy to the skies it meant Liverpool had won it more times than the other Premier League clubs put together. Mohamed Salah and Divock Origi know now how it feels to score the decisive goals in European football’s showpiece occasion and, when the reward is so high, it will not bother Jürgen Klopp or any of the victorious players that they could have played a lot better.

Spurs will never forget the night they passed up the opportunity to win the biggest match of their 137 years in existence. For Mauricio Pochettino and his players, it was like seeing a beautiful painting being ripped apart. They will be pained, in particular, that Alisson did not have to make a noteworthy save until the late exchanges and the harsh reality at this level is that there is no glory attached to competing in the final if, at the end of the night, you are not allowed to examine how cold the metal feels on your hands. Liverpool’s players had been through that anguish against Real Madrid last year.

They were here to make sure the same did not happen again and this time they had Salah on the pitch for a lot longer than he was in Kiev. Liverpool were playing a team that finished 26 points below them in the Premier League last season, rather than one that had come to think of the Champions trophy as their own private possession. There was no Sergio Ramos, with his devil’s horns and that look on his face that said: who, me?

What Klopp’s men could never imagined was that they would score before any of the 22 players had a scuff of grass on their knees.

To be precise, there were 23 seconds on the clock when Moussa Sissoko jutted out his right arm to give away the penalty that blew a gaping hole in Tottenham’s plans. It took Salah another 91 seconds to collect the ball, place it on the spot and gather his thoughts from 12 yards out. It was his first kick of the night and, even above the desperate whistles of the Spurs fans, it was possible to make out the satisfying thud of leather on leather. Salah aimed his shot through the middle, Hugo Lloris dived to his left and the ball was still rising as it flew into the part of the goal the goalkeeper had vacated.

These were the moments when we were reminded how Spurs, as Pochettino will admit, are still callow at the highest level. If anything, it has been an endearing trait on their run to the final. Yet every elite player should know the risk in modern-day football of sticking out an arm when a cross might be coming into the penalty area.

Sissoko’s pose was of a man looking the wrong way while he craned to change an invisible lightbulb. The delivery came from Sadio Mané, no more than three yards away, and the game heard its first whistle from the referee since it was time to kick off. Sissoko will have to live with that guilt for an awfully long time.

After that kind of start, perhaps it was not a surprise that Spurs took a while to shake their heads clear. Son Heung-min’s direct running did create some trouble for the Liverpool defence and Spurs could be encouraged before half-time by the number of times they had the ball in encouraging areas.

What they could not find, however, was the final pass to work a clear opening and present Harry Kane, perhaps, with the chance to justify why it was he, not Lucas Moura, spearheading the team’s attack.

They had to be better in the second half but, then again, there was also scope for a lot of improvement in Liverpool’s play. The players in red can move the ball much more efficiently than they showed here. Trent Alexander-Arnold and Andy Robertson did threaten the Spurs goal before half-time but it was strange to see Liverpool allowing so many moments of carelessness to creep in, or the lack of cohesion sometimes between Salah, Mané and Roberto Firmino, who was fit enough to start but did not even last an hour.

That in turn encouraged the Spurs supporters to turn up the volume for the second half and Sissoko, to give him his due, was one of the players driving on his team.

Dele Alli had their first clear chances, clipping one into Alisson’s hands and then heading over. James Milner, one of substitutes, could have soothed Liverpool’s nerves but the winners had to endure some anxious moments before Origi, who had replaced Firmino, swung his left foot at the ball.

It was a clean strike, aimed diagonally into the bottom corner, and now Liverpool could start the party. 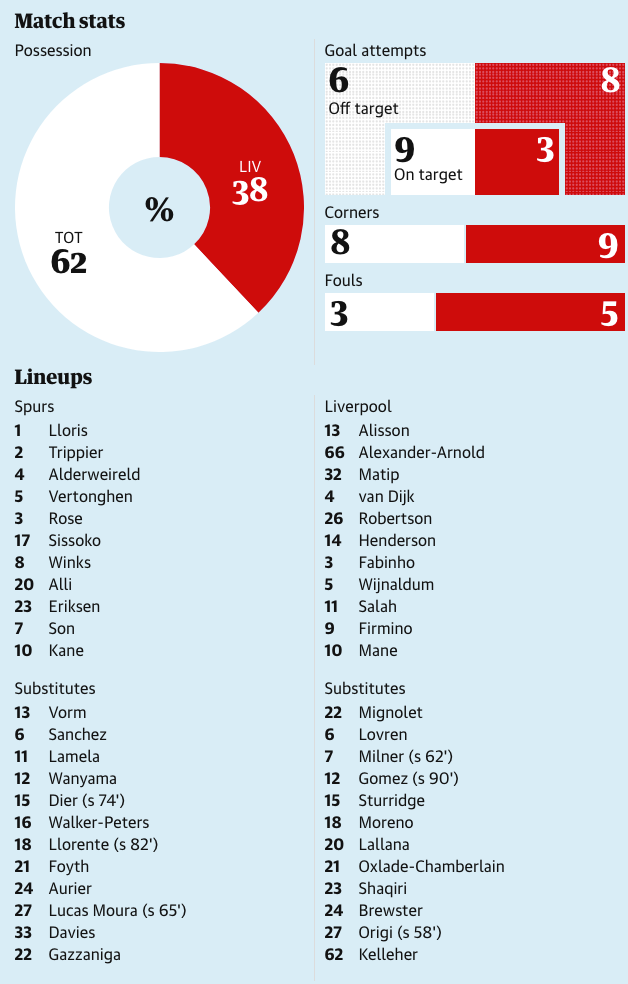 Daniel Taylor at the Estadio Metropolitano