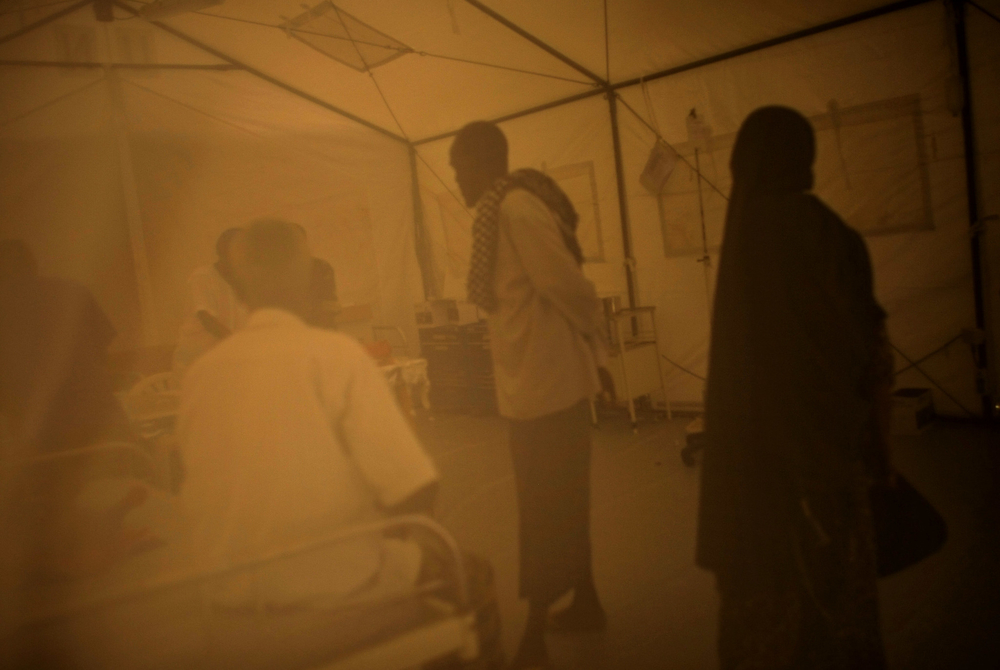 ‘People are denied treatment or even prevented from receiving treatment.’

Despite high rates of mental illness in Somalia, the country is unable to provide the most basic of care to those in need – many of whom are isolated, chained to hospital beds, or even jailed.

One in three Somalis are affected by some form of mental illness, a far higher rate than the one in five expected among communities living in war zones, according to the World Health Organisation(WHO).

Somalia has been at war for close to 40 years. It has suffered three famines, waves of displacement, and currently 5.4 million people – more than one third of the population –  rely on aid to survive.

Despite these trauma-inducing conditions, Somalia has only five WHO-recognised mental health centres – basic at best – and just three psychiatrists for the entire country.

“All this violence and killing could be the manifestation of a wider problem.”

Abdurahman Ali Awale is one of them, working out of the hospital in the capital, Mogadishu, serving a population of 2.8 million.

Awale worries that the scale of unaddressed mental health problems is so vast it may be contributing to Somalia’s instability. “All this violence and killing could be the manifestation of a wider problem,” he told The New Humanitarian, referring to the country’s political instability and insecurity.

In the self-declared independent republic of Somaliland, psychiatrist Djibril Ibrahim somehow manages to see anywhere between 20 to 50 patients a day. There is only one other psychiatrist working in a region of four million people.

Traditional male gender roles are under pressure in the Somali context of endless war. The exacting expectations for men is that they be “courageous, generous, [good] orators, patient, humane and capable,” according to a Rift Valley Institute study. But men are not only the overwhelming perpetrators of violence but also its victims – and they additionally tend to lose out in the aid agency gender pecking order over who receives assistance, said the study.

Joblessness makes matters worse. An unemployment rate of 80 percent in Somaliland is not only a source of distress, but many people resort to chewing the mild stimulant khat to pass the time – which can be detrimental when taken in excess.

“The bulk of the literature about khat abuse and psychosis indicates they have a direct relationship,” said Ibrahim. “In the 70s and 80s people [in Somaliland] used it in the afternoon. Now we are seeing khat used from sunrise to sunset due to unemployment and depression.”

GRT (“Gruppo per le Relazioni Transculturali”), an Italian NGO based in the northeastern port city of Bosaso – in the autonomous region of Puntland – has linked nearly a quarter of its mental health cases to khat use.

Migrants returning to Somalia, often traumatised during their journey or time abroad, are adding to the mental health caseload. “Deportees [including from the United States and Europe] are among my patients,” said Awale. “Cases I have seen include drug addiction but also traumatised persons.”

Ismail Mohamed, now 40, migrated from Mogadishu to Yemen five years ago. During a boat crossing from Bosaso, he said he witnessed women and children drown and was himself beaten by the smugglers on the boat.

“Men are not only the overwhelming perpetrators of violence but also its victims.”

He reached Saudi Arabia, where he hoped to find work but was deported eight months later after spending two months in jail as an undocumented migrant. In December 2016 he was back in Mogadishu, struggling to reintegrate.

“It was like that something bad was going on in my mind,” Mohamed explained. “I could not talk. I would fight my mother and family members. I did not know what I was doing. Sometimes I would sleep for two days and two nights.”

“When I first met Ismail he was suffering from a very bad post-traumatic stress disorder [PTSD], which is a mental health condition triggered by the terrifying events he has witnessed,” said Awale. “Daily, about five to 10 [people] with PTSD arrive at the hospital.”

Awale and other mental health professionals say its difficult to keep up with the need for mental healthcare. Government support is minimal and public hospitals rely almost entirely on private charity. “We survive [through] donations provided by members of the diaspora,” said Awale.

Awale has routinely called for a more robust government policy to protect and treat mental health patients – to no avail.

In Somalia, as in many countries of the world, the problem is not only the lack of care but the quality of treatment. Chaining patients is a widespread practice both in hospitals and in private homes which is “socially and medically accepted,” according to a WHO report. For some families, forced to look after sick relatives, this may be “an act of desperation” rather than cruelty.

“The stigma and discrimination towards people [with mental illnesses] is beyond imagination in this country.”

“You see patients who are sometimes traumatised and need some sort of support are being chased and insulted on the streets of Mogadishu by a mob,” said Awale. “It’s painful to see the cruel treatment meted out to these patients by some parts of society.”

It’s a similar case in Somaliland. “The stigma and discrimination towards people [with mental illnesses] is beyond imagination in this country,” said Ibrahim. “People are denied treatment or even prevented from receiving treatment.”

This extends to some drug rehabilitation facilities. “There was a rehabilitation centre I was called [to] for a patient. I was shocked to see the mentally ill patient who had a high fever kept in chains and shackles,” Awale recalled.

In some cases in Somaliland, relatives take their kin suffering from mental health issues to prison, Ibrahim told TNH.

“You can’t believe it, but I did a study in 2014 at Borama Prison where 143 of the 200 inmates were mental health patients with no criminal record,” said Ibrahim. “We had to advocate for them, talking to lawyers and police, to ensure they were released.”

Last year Awale and other volunteers took part in WHO’s Chain Free Initiative, a campaign that aims to achieve dignity for the mentally ill. The goals include chain-free hospitals, chain-free homes, and a chain-free environment that can offer an improved quality of life for patients.

“Mental illness should be seen as a normal illness,” said Awale. “Sometimes patients may need only a short counselling period.”

Freelance journalist based in Mogadishu, and

Tom RhodesFreelance journalist based in Nairobi.