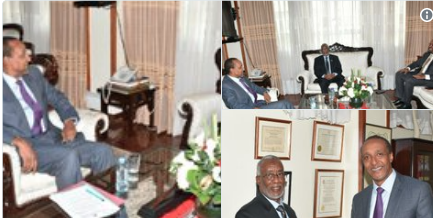 Why did Kenya call Somaliland a ‘country’ and what is Somalia’s reaction?

Although Somalia is not happy about Kenya’s tweet, it doesn’t want to respond.

Over the past few years, Kenya and Somalia have been arguing about a disputed area of the Indian ocean that lies between the two countries.

The case is due to go to the International Court of Justice in September.

The situation escalated recently when Kenya accused Somalia of auctioning areas of the sea that they believe contain oil.

Since the start of the diplomatic row, Kenya has enjoyed a good relationship with the self-declared republic of Somaliland.

Somaliland’s foreign minister has been in Nairobi for several weeks campaigning for his government to get recognition from Kenya. According to international law, that is out of question.

Somaliland has seen itself as a “country” since 1991 when it declared its independence from Somalia. Talks between Somalia’s government and Somaliland officials ended with no solution.

Kenya and Somaliland have opened diplomatic missions in Hargeisa, Somaliland’s capital, and Nairobi, respectively. Kenya has sent members of its parliament to Somaliland to observe how peaceful it is and take part in its independence day on 18 May.

Kenya does not want to damage Somalia’s sovereignty, but as well as this tweet, it has taken other pointed actions against the Somali government recently, such as diverting flights between Mogadishu and Nairobi through Wajir for security screening.

Analysts believe that Kenya is putting pressure on Somalia to encourage it to discuss the maritime dispute instead of waiting for the ICJ decision.

However, there are questions about why Somalia’s government is so quiet and not reacting to Kenya’s pressure.