Somaliland strongly admonishes the Somalia administration for unjustifiable, persistent aggression against the people and government of Somaliland

The Republic of Somaliland called the international community to unfetter it from Mogadishu and to no longer knot its development and status to a Somalia whose inimical attitude and actions against Somaliland have fully come to the open.

At a Council of Ministers meeting which the Vice President – now the Acting President, Abdirahman Abdullahi Ismail ‘Zeili’i, chaired, Thursday, the Cabinet sternly admonished the continued belligerence of Somalia against the government and people of Somaliland.

“We herein issue a strong warning to the administration in Mogadishu which has of late made a habit of persistent offences against Somaliland revealing a deep enmity and hostility it harbours against the people of Somaliland,” a strongly worded press release issued by the Presidential Spokesman reporting the Council decision stated.

The world, the statement went on to say, attests to how determined Somaliland is to meticulously foster international cooperation, development and security.

“The Somaliland Republic has always shown a willingness to open dialogue with the Mogadishu (Xamar) administration at any international venue but their absence from the recent Kenya meeting attended by the international community makes nought of that sentiment,” the Council pointed out.

“Somaliland cautions against any hostile activities on the part of the Mogadishu administration that can adversely affect the Horn and especially against its backdrop of volatility,” the statement added.

The Council of Ministers, according to the press release, urged the people of Somaliland to give extra attention to the defence of their nation.

The federal government of Somalia has stepped up pressure on the international community to relegate the 28-year old Republic of Somaliland to a federal state status despite the fact that all justifications to hold on to Somaliland anymore are not only flimsy but illegitimate and an outright injustice to the people of Somaliland.

An internationally-recognized Somaliland went over to unite with Somalia on 1 July 1960 but that union failed as the principle which motivated the union failed to materialize. Big junks of areas under Ethiopia, French-colonized Djibouti and the Northern Frontier District (NFD) of Kenya were to join the two to form a Greater Somalia Republic. 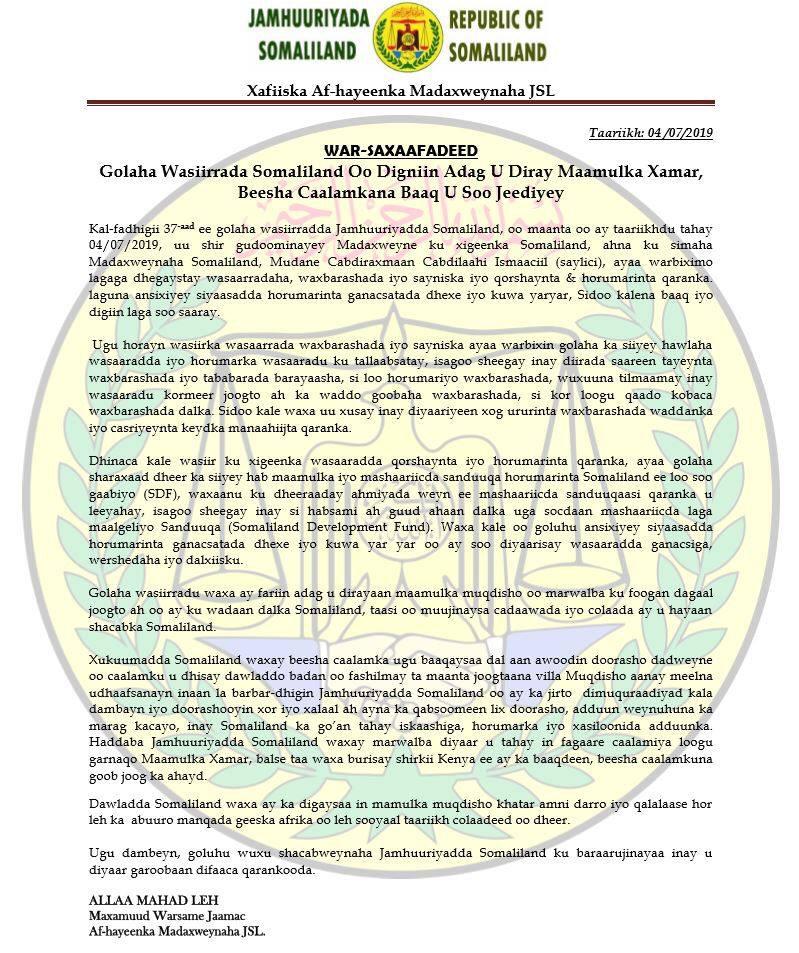