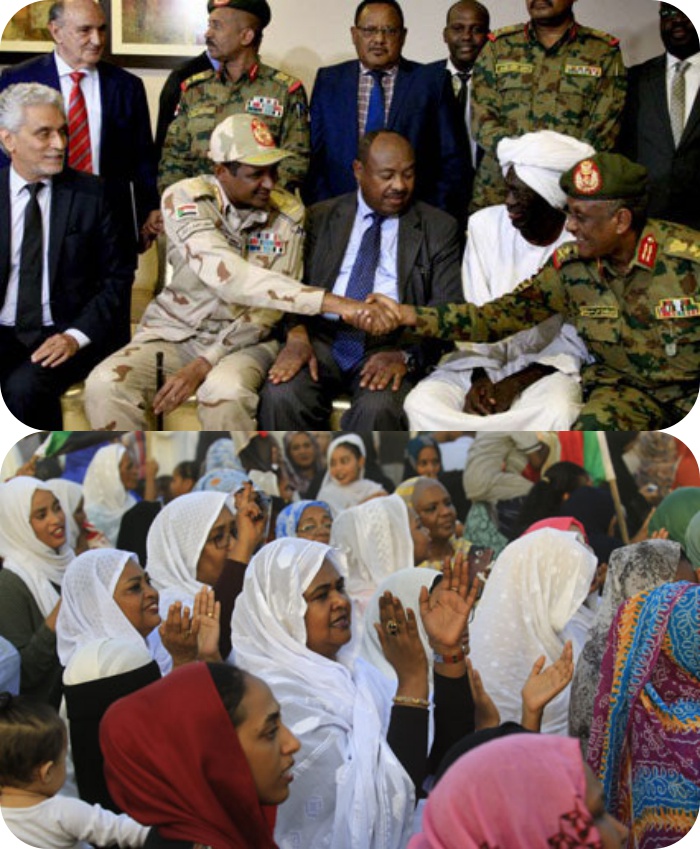 After months of political uncertainty, Sudan has taken its first step towards a democratic transition, but getting the ruling generals to deliver on a power-sharing accord with protesters remains a challenge.

“The only path forward is a negotiated deal between the two sides,” said Alan Boswell, senior analyst at the International Crisis Group think tank.

That body is to oversee the formation of a transitional civilian administration that will govern for three years — the main demand of demonstrators.
BASHIR EXIT
The two agreed the ruling body would have a rotating presidency, a breakthrough following months of political impasse after the army in April ousted long-time ruler Omar al-Bashir on the back of a popular uprising.
Tensions climaxed on June 3 when armed men in military fatigues stormed a longstanding protest camp in Khartoum, shooting and beating crowds of demonstrators in a pre-dawn raid.
Dozens were killed, triggering international outrage, although the generals insisted they did not order the violent dispersal of protesters.

The power-sharing deal comes after intense mediation by Ethiopia and African Union diplomats.

“Any agreement is a positive step. The challenge will be actually getting the military council to do as it promised,” Boswell told AFP.

On Saturday, the head of that council General Abdel Fattah al-Burhan vowed to “implement” the deal and to work “in close cooperation” with the protest leaders.

The governing body will have a total of six civilians and five military representatives. The six civilians will include five from the umbrella protest movement, the Alliance for Freedom and Change.

A general will head the ruling body during the first 21 months of the transition, followed by a civilian for the remaining 18 months, according to the framework agreement.

Against the backdrop of the June 3 raid, experts doubt whether the military will keep its part of the deal.

“The key question is whether the military or the security sector more widely will cooperate fully with civilian members of the board or is cooperation mere window dressing,” said Andreas Krieg, assistant professor at King’s College London.

“It is the security sector’s intent to accept civilian control that will determine whether Sudan can move to a fully civilian rule in the future.”
Bashir, who came to power in an Islamist-backed coup in 1989, ruled Sudan with an iron fist thanks to the security apparatus, especially the feared National Intelligence and Security Service (NISS) — accused by rights groups of trampling human rights and freedoms.

Experts say the power-sharing accord is far from a long-term solution to the country’s overall political crisis.

One potential dispute is over the eventual formation of a transitional parliament.

Friday’s agreement postponed the creation of a 300-seat transitional legislature — 67 percent of which would be lawmakers from the protest movement — that had already been agreed in previous talks.

“Failing to agree yet on the legislative body is a giant red flag. This risks becoming the new impasse,” said Boswell.

“Even in a best case scenario, Sudan will be navigating a very challenging transition for years to come.”

Boswell said the protest movement “will almost certainly need to continue mobilising its street power to pressure the military council to uphold its commitments”.

Prominent protest leader Babikir Faisal said that while the deal may not be a cure-all, an agreement with the generals was needed.

“Given the overall tension, agreeing on a sovereign council and a government is a step forward,” he told AFP.
“The other choice would have been to take the path of confrontation.”

The protest alliance says it is now in charge of appointing the new prime minister and a transitional government of technocrats.

Faisal said the first priority of the new administration will be to offer a “relief programme” aimed at tackling Sudan’s economic crisis.

“The economic situation is very difficult,” he said.

“This is one of the major challenges. This revolution was also triggered by the crisis of bread.”

Protests first broke out after the government tripled the price of bread, but they swiftly escalated into nationwide rallies against Bashir’s rule, culminating in his ouster on April 11.

And while addressing economic concerns will be key, it will be just one of many challenges facing the protest leaders in their new role, said Khalid Tijani, editor of Sudan’s economic weekly Elaf.

“The government will be formed by the alliance, which means revolutionaries,” Tijani said.

“They have taken on a huge burden of responsibility, because any failure will be blamed on them ultimately.”