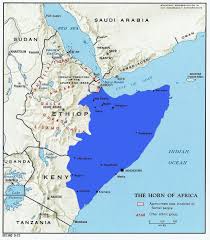 Federal “Government” of Somalia, residing in a highly fortified Villa Somalia, cut non-existent diplomatic ties with Guinea Conakry because the latter accorded what looks like official reception to the Somaliland delegation led by its President. The diplomatic row may be inconsequential, but it illustrates how successive governments of Somalia hold African states and the wider international community hostage to their failed irredentist project of Greater Somalia that briefly, albeit in its incomplete form, existed between the early 1960s and early 1990s. By rejecting and sabotaging Somaliland’s quest for widening its de facto engagement with the international community, the Transitional Government is signaling its preoccupation with irredentism and that it doesn’t give a crap about the pragmatic African consensus that colonial borders are sacrosanct and revered. A little reading of the 1964 Cairo Declaration would suffice.

Ethiopia, being the country with the most vested interest in the region, should reassess its strategic foreign policy towards the Mogadishu-based government. The era of appeasing Mogadishu politicians should come to an end. Emperor Haile Selassie I pushed for the adoption of the Cairo Declaration as a reaction to the Somali irredentism of the early 60s and Mengistu Hailemariam went full on support to Somaliland liberation struggle in response to Siad Barre’s regime second attempt at irredentism. Meles Zenawi has preferred a delicate, and pragmatic at the time, balance of “three-track” relations with the constituents of the Somali republic that was between 1960 and 1991: one diplomatic track for whoever controls Villa Somalia, another for the self-declared autonomous region of Puntland and other de facto autonomous regions in the South and Central Somalia and a third one for the state of Somaliland, a former British protectorate that voluntarily united with the Italian colony of Somaliland mere six days after existence as one of the newly independent nation of Africa and withdraw from the voluntary union afterwards.

Ethiopia’s official position that the territorial integrity of the Somali Republic (1960 – 1991) should not be violated is indirectly predicated on violation of its own territorial integrity. It is so because the Somali republic that existed for the brief 30 years was only a partial fulfilment of the irredentist Greater Somalia project that sought to bring all Somali speaking communities of Djibouti, Kenya, Ethiopia, British Protectorate of Somaliland and Italian Somali colony together. The British Somaliland and the counterpart in the South entered in to voluntary union hastily to form the Somali republic in June of 1960 and they proceed with their project of Greater Somalia using direct and proxy wars against Ethiopia and Kenya.

Leaders driving Ethiopia’s foreign policy must come to the recognition that by acknowledging the colonial borders, by way of extending de jure recognition to Somaliland, they would forever be putting the last nails on the coffin of irredentism in Horn of Africa. A misguided concern that compares Somaliland’s withdrawal from the voluntary union it entered with Italian Somali colony with Ethiopia’s own separatist politics is foolish at best. African boundaries are for a large part product (byproduct) of colonial legacy. By recognizing Somaliland, no, we are not putting any precedent that would come back to haunt and bite us. Senegal and the Gambia have in the past formed a union and later dissolved it and that was never used as a precedent for secessionist ideology or forces. Eritrea’s independence was widely and immediately accepted outside of Ethiopia because it fits with the consensus that colonial boundaries are the basis for statehood in Africa. Somaliland’s statehood and its boundaries are as much product of Africa’s colonial history as is for Chad or Tunisia or Malawi.

A de jure recognition of Somaliland will usher in new prosperity zone along the Berbera-Togochale-Jijiga corridor by enabling legitimate international trade and expanding economic opportunities. Somaliland will not only be a port for our imports and exports. It is also a big market. Formal and informal annual Khatexports to Somaliland amounts in hundreds of millions of dollars. There is untapped demand for agricultural produce. We can also benefit from the large reserve of seafood Somaliland possess along it 750 plus kilometers of coast.

Recognizing the state of Somaliland will also decrease Ethiopia dependence on the Port of Djibouti putting leverage away from the government of Djibouti that rarely consult us when bringing militaries from across the globe to our doorsteps. The government of Ethiopia is already said to be owning around 18 percent of the newly developed Berbera ports and that is expected to bring the cost of imports and exports down. Somaliland officials this writer talked to are open to the idea of hosting the newly created Ethiopia’s naval force in one of Somaliland’s coastal towns. The fact that Ethiopia hosted more than a million of Somalilanders for around a decade during their fight with Mogadishu is not lost to the nation because that very generation still exist and their children are either born in Ethiopia or told in their history and civic lessons.

Mogadishu is likely to vehemently reject any move towards de jure recognition of Somaliland. That is to be expected. But it will be an empty cry just like the cutting of non-existing ties with Guinea Conakry. We have all the leverage and the recent symbolically important opening of office of the Ogaden National Liberation Front(ONLF) in Addis Ababa meant that they have lost the last leverage they have over the government and people of Ethiopia.

Ed.’s Note: Kassahun Addis is a longtime observer of politics in the Horn of Africa. The views expressed in this article do not necessarily reflect the views of The Reporter. He can be reached at kassax@gmail.com.