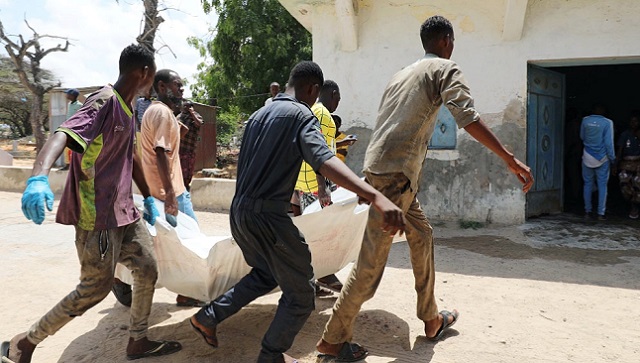 Reports emerging from reliable sources now confirm that over 20 people have lost their lives at and around the first security checkpoint to the highly guarded areas of Adan Adde airport, Halane and hotels patronized by international staff, MPs, government officials and diplomats where a suicide bomber detonated a car laden with explosives at around 10:40 a.m. Monday.

The checkpoint was not far from the only turning to the airport at KM4.

A suicide bomber, driving a Toyota Noah van, was stopped at the checkpoint. He tried to forcibly crash the barricades but was effectively blocked by the police at which point he triggered the bomb.

Medina Hospital director confirmed that 17 of the dead were taken to the hospital. Over two dozen of the injured also reached the hospital.

Sources add that it was not only Medina Hospital hat the dead and the injured were rushed to. Several other hospitals received smaller numbers – dead and alive.

People who had been hit by the detonation, according to the sources included security personnel, pilgrims travelling to Saudi Arabia for the Hajj, and bystanders most of whom drivers of taxi motorbikes who used the area as a station.

Al Shabaab, the dreaded Al-Qaida affiliate, claimed responsibility, adding that among the dead and injured were high government officials whose officials were being checked out at the time. The Group, also, stated that the bomber intended to reach the AMISOM-manned entrance checkpoint to the airport itself, where they expected to inflict heavier damage to both the AU peacekeepers and civilians being admitted to the airport. That particular had always a long queue of people and vehicles checked out so meticulously before they are allowed to enter the airport grounds.

This happens at a time the two top leaders of the weak Mogadishu administration seem not to be working in tandem but on polarized tangents. Of late, the Prime Minister, Hassan Ali Kheyrre, appear to have assumed both the roles of Prime Minister and President further highlighting the waning influence of president Farmajo.

Kheyrre has within the week convened high calibre meetings with international partners and Qatar at Dhuusamarreeb – over 410 kilometres to the north of Mogadishu – the government seat.