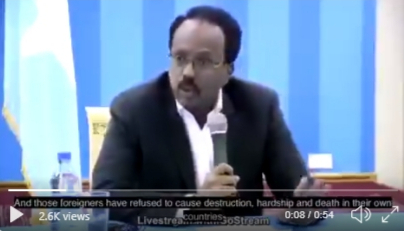 The President of the teetering federal administration of Somalia, Mohamed Abdullahi Mohamed ‘Farmaajo’, was caught on tape pleading with the Islamist, Al-Qaida-linked Al Shabaab fighters to bomb elsewhere.

“There are foreign fighters fighting alongside them. By crossing over to their side here, these people have removed threats from their homeland. But these guys here (Somalis) are idiots and fools. If they had crossed over to where the foreigners came from and bombed it the same as these people were doing here, it would have been OK. But they do not,” he said.

In saying so, the President makes it clear that he could live with Somali Al Shabaab members crossing borders to, for instance, Ethiopia or Kenya, to bomb targets there while Shabaab nationals from those countries carried out operations in Somalia. He suggested that there should have been a reciprocal approach kind of arrangement between the fighters: I will bomb yours while you go and bomb mine.

“Instead,” he went on to say, “the agreement among them appears to be that this (Somalia) should be the only one to be bombed which means that ours (Somalian members) are fools“.

“They (Somalis) were sent to kill their mothers, brothers/sisters and to kill their people, while those with them (foreign nationals) have removed the same threats from their areas and people,” Farmaajo repeats again.

Coming from the President of a government-held together by the sheer – if misguided – determination of the international community, keeping Al Shabaab fighters away from his doorstep, it shows how futile their effort is as it shows how criminally bent he and his selection of top officials really are.

Farmaajo has pulled the noose on himself – a move that opens him wide to a criminal indictment.

Many had been wondering why he did not act on the information and recording provided by the New York Times which revealed how deeply and inextricably Qatar was involved in killing his people, bombing parts of ‘his country’.

This latest recording exposes Farmaajo – if anything –  as a co-partner in the bombing, maiming and killing that has become an enigmatic puzzle to the international community. and in the import of crime elsewhere when it suited him in line with the policies of Somalia’s s shadow government masters – Qatar.

With this guy and Kheyrre at the helm in crime-infested Somalia, observers say, nobody is safe – not his people, not international partners, not neighboring countries. None. 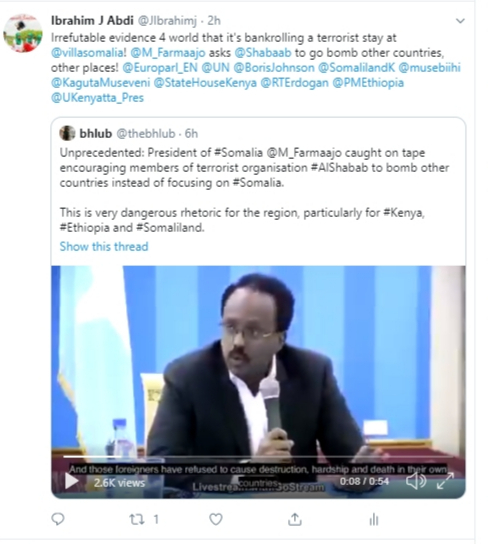