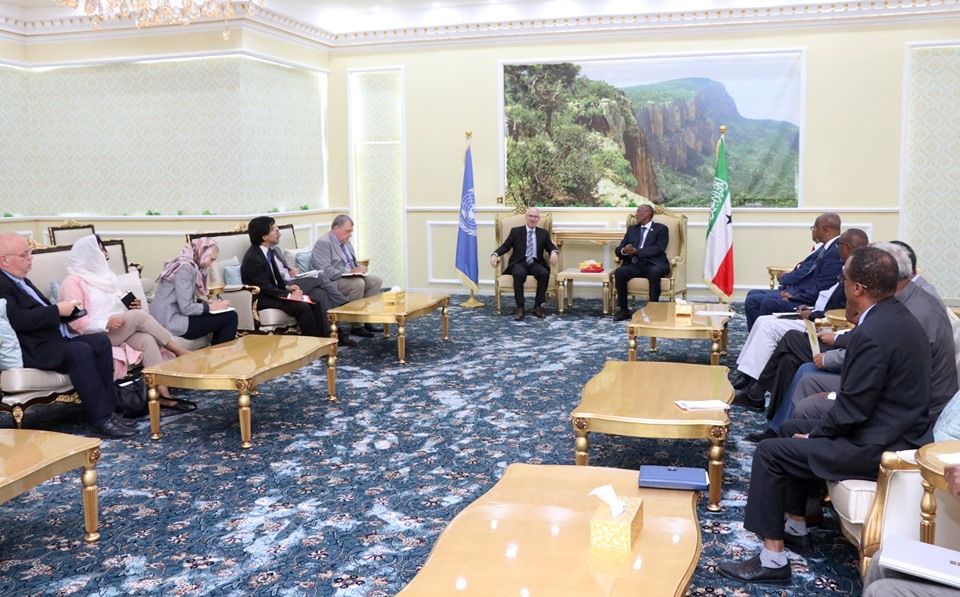 His Excellency the President of the Republic of Somaliland, Musa Bihi Abdi, received at his office the UN Secretary-General’s Special Representative to Somalia and Somaliland, James Swan.

The President of the Republic of Somaliland H.E. Muse Bihi Abdi has today received the UN Ambassador James Swan.
Discussed the President on a wide range of issues pertaining to the UN humanitarian tasks in #Somaliland, upcoming elections and security. pic.twitter.com/JaYSKEZjxl

The two leaders discussed a number of issues critical to Somaliland-UN relations among which the completion of preparatory activities leading to the upcoming parliamentary and municipal council elections.

At the end of a lively face-to-face, candid discussions, Mr Swan spoke to the media, highlighting salient points raised during the meeting.

Mr Swan, on his first visit to the independent but unrecognized 28-year-old, time-tested democracy in the Horn that is Somaliland,  added that he was much pleased to see the progress made on sectors critical to the nation’s development since he was here last. Swan said he had, previously visited Somaliland in 1995, then in 2012 and 2013, respectively

“It’s good to be back in Hargeisa. I first visited in 1995, and again in 2012-2013. Even during my brief visit now, I can see the progress achieved. The vibrancy of the economy and the general security that has been maintained underpin confidence in the future,” the SRSG stated.

Speaking of how importantly placed in UN and in international community’s priorities on Somaliland were holding timely elections, and completing all loose ends before 12 December 2019, Mr Swan said: “We also discussed the importance of completing the necessary preparatory work to proceed to credible parliamentary and local elections very soon. In that context, I was pleased to learn of the agreement reached yesterday among political parties that we hope will lead to those elections on an early timeline”.

During his three-day visit to the Republic, had the opportunity to see some of the work that the United Nations was undertaking to address both immediate humanitarian needs and longer-term development goals.

.@UN envoy James Swan has spent two days in #Hargeisa where he met with #Somaliland's President @musebiihi and local women leaders, and saw first-hand some of the world body's support for #humanitarian and #development projects – check out this video for a snapshot of the visit! pic.twitter.com/2elaOibx0R

“Yesterday, I visited a skills production centre, supported by the UN refugee agency, UNHCR. It was inspirational to see the practical training being provided to equip refugees and asylum-seekers to support themselves and their families, and also to contribute to the host economy.

“I also visited the Civil Service Institute, supported by the UN Development Programme and the Ministry of Interior. It was interesting to meet public officials working to overcome the challenges of developing local government which is both accountable and responsive to those using local services”, the UN envoy said.

Mr Swan, again, warmly thanked His Excellency the President, members of the Somaliland government and the public for the warm welcome accorded wherever he stopped.

“I look forward to continuing my connection with the authorities and people of Somaliland, and I will take this chance to thank President Bihi and his colleagues for their support to the UN operations here”, he expressed.

Mr. Swan was on his first visit to Somaliland since taking up his post in late June. He was accompanied by a senior official from the Office of the UN High Commissioner for Refugees (UNHCR), the UN Food and Agriculture Organization (FAO) and UNDP – Takeshi Moriyama, Serge Tissot and Jocelyn Mason, respectively.

On the Somaliland side, the Vice President, Abdurahman Abdullahi, and the Ministers of Finance, Abimal Husbandy and the Vice Minister of Foreign Affairs were there.

The SRSG’s visit comes less than a week of a starkly contrasting day Mogadishu when he barely escaped an assassination attempt targeting him.

According to a statement released by the Islamist fighters which had plagued Somalia and the region, in general, following a devastating suicide-bomber raid at the Somalia Federal Government’s Mayoral/Gubernatorial offices last Wednesday, the bomber narrowly missed the SRSG. Instead, the Mayor and more than a dozen other top-ranking districts and regional officials were critically wounded where 9 officials were instantly killed.

Again so conspicuously the atmosphere and relaxed stay of the SRSG in Somaliland and the palpable warmth of the reception he got here from the President down, the President of the Mogadishu administration, Mohamed Abdullahi Mohamed Farmajo, lamented why Al Shabaab was not bombing elsewhere and focusing on him, revealing how he subliminally welcomed  killing and mayhem outside of Somalia, and perhaps in neighbouring countries, in the hands of the Islamist fighters.

President Farmajo was caught on tape, on the same day as the SRSG escaped on a hair’s breadth from assassination, and so many others were either killed or horribly injured, snivelling: “There are foreign fighters fighting alongside them. By crossing over to their side here, these people have removed threats from their homeland. But these guys here (Somalis) are idiots and fools. If they had crossed over to where the foreigners came from and bombed it the same as these people were doing here, it would have been OK. But they do not,” he said.

In 1995, he was in Kenya serving at the US Embassy in Kenya.