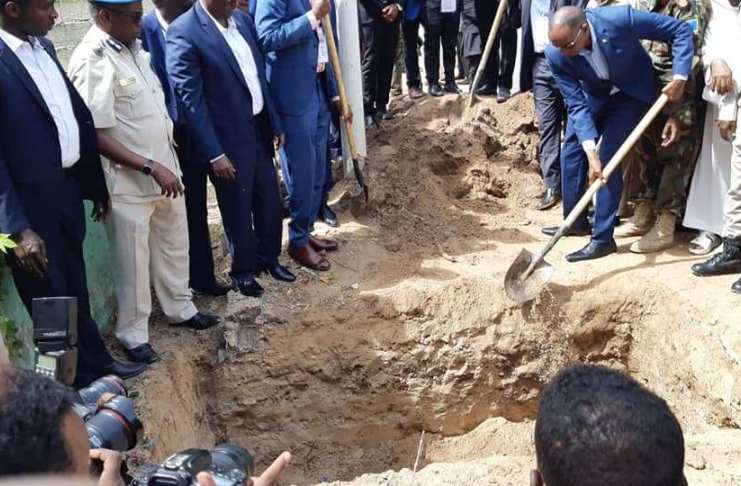 The late Engineer Abdirahman Osman ‘Yarisow’ was laid to rest today at the grounds of the Police Academy, Mogadishu, Somalia.

BREAKING: Mogadishu buries its Mayor Abdirahman Omar Osman (Engineer Yarisow) as national leaders lead the mourners. The body of the Mayor was returned by a Qatar military plane from Doha where he passed away, thurs. Yarisow was fatally injured in Al-Shabaab attack on July 24. pic.twitter.com/mtE2ulVGLS

The body of the Ex-Mayor was brought to Mogadishu by a special plane. Jinasah Prayers were conducted at the Aden Adde International Airport, attended by President Farmajo and almost all the rest of his government and the parliament.

The Mayor/Governor, who took over the leadership of the Federal Somalia Government, Mogadishu, only last year was critically wounded at his office on July 24, and later succumbed to the extensive injuries he sustained on the head and abdomen, Thursday, in a Doha, Qatar, hospital where he, along with a dozen others, was flown for urgent treatment.

The slain Mayor, in a seemingly clairvoyant moment, asked for public forgiveness less than a week before the attack which eventually killed him.

“I forgive anybody who has in any form wronged me. I request for forgiveness from whoever holds a grudge against me for a real or perceived wrongdoing on my part,” he said on record.

Mayor Yarisow: Lets forgive each others. Any person who wronged me, i forgive. I hope iam forgiven too if i wronged anyone#Somalia#Mogadishu pic.twitter.com/afgUZanJoQ

The deceased official was largely hailed worldwide as an astute, hard-working leader committed to improving the security of an unstable capital where, more often than not, conflicting forces and interests go extreme lengths to achieve ends.

A hue and cry for the killers went up spontaneously far and wide. Francisco Madeira, special representative of the chairperson of the African Union Commission for Somalia, and the UN Secretary-General representative to Somalia/Somaliland, James Swan both called for the arrest of the MAyor’s killers.

“As we come to terms with the passing of the mayor, terrorists should be aware that their cowardly attack will not break the people’s resolve to forge ahead,” The AU Chief in Somalia, Madeira, said in a statement Thursday.

“He was a true friend and companion of AMISOM and supported, without reservation, our mandate to help usher in a stable, peaceful and prosperous Somalia,” said the AU envoy.

Ambassador James Swan, the U.N. envoy, said, “His work must be continued, and those responsible must be brought to justice.”

Similarly, all who have worked with the deceased have come out in force attesting to the slain Mayor’s integrity, hard work, commitment and positive outlook on life and people.

Ambassador Yamamoto and the staff of @US2SOMALIA are profoundly saddened by the loss of Mayor Yarisow, who was an excellent partner and tireless advocate for the people of Mogadishu and all Somalis. We extend our deepest condolences to his family and the people of Somalia. pic.twitter.com/Ma1JYU1Sqe

Terrible news. Somalia has lost a fine public servant. It was a great honour and pleasure to work alongside Yarisow in Mogadishu. Brave and completely fearless. The best of Somalis. My condolences to all his family @1MohamedOmar. RIP walaalkey https://t.co/EoYhwFqTIM

Mourning the passing away of my friend, #Mogadishu Mayor and Benadir Governor Abdirahman Omar Osman (@engyarisow). We engaged hard to Prevent and Counter Violent Extremism. Deeply saddened to see Yarisow fall victim, but his legacy and commitment to the cause will prevail.

With my good friend Engineer Yarisow, the mayor of Mogadishu. May he rest in peace. pic.twitter.com/Hfd8VAbd0I

Farewell to my brother and Boss, he was one of the coolest and kindest people I’ve ever had the privilege of working with. Rest in Peace Eng Yarisow. pic.twitter.com/DGlBEtJJW6

A tragic loss for you, your whole family and Somalia. A truly remarkable man. May he rest in peace and may you be comforted by the knowledge that your father was held in high regard by friends near and far.

This is a desperate, tragic loss. Your father was remarkable, irrepressible, humble and inspirational. He was a friend and colleague, a patriot and a leader; a brave and fine man and someone I am proud to have called my friend. My sincerest condolences to you & your family.

The death of the Ex-mayor and the circumstances that surrounded the alleged Al Shabaab suicide bombing, however, was all accepted at face value, and/as claimed or reported.

Al Shabaab claimed the bombing. It did not say, as it usually did, who carried it out or reveal the identity of.

The Islamist fighters stated that the objective was to kill the UN SRSG, James Swan, who had, just a short while ago, had a meeting with the Mayor at the conclusion he left the compound. The bomb, as fate may have it, caught a great number of district and regional officials in meeting with the Mayor. Nine were instantly or shortly afterwards as a result. A dozen more were critically injured, including the Mayor who, also, died of his injuries.

The government, perhaps too hastily, heavily leaned on a blind female executive of the office, Basira Abdi, the head of the office janitors, who, herself had been killed in the explosion. Basira had worked at the office and had never been known for extremist views. The fact that she is dead and cannot defend herself was too obviously exploited by a government looking for a hapless scapegoat, but the anomaly did not escape the public eye.

There were voices that immediately emerged after the event placing the blame squarely on the government lap. These people claimed that the deceased Mayor and the president were not on the best of terms and that their deteriorating relationship would have soon burst out into the open if the explosion did not happen.

There were those who openly contended that how the bomb was smuggled into a highly secure compound had all the hallmarks of NISA – the government intelligence arm – wrought all over it. 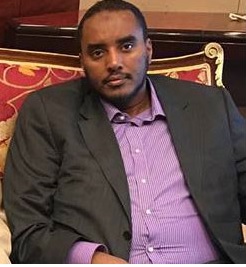 The letter claimed that the bomb was smuggled into the compound and planted there by Fahad Yassin’s NISA operatives.

Fahad is said to be the resident leader of Qatari interests in Somalia, the chief bursar of the weak federal government’s covert operations a privilege which, virtually, makes him even more powerful than the President and his PM, Kheyrre.

Nothing concrete, however, has surfaced thus far revealing what, exactly, had happened or whether, as claimed, the Mayor/Governor, Engineer Abdirahman Osman, was murdered as suspected or not.

One thing is certain a great number of organizations, individuals and intelligence agencies, including those of the United Kingdom, the Ex-Mayor’s other nationality, are working on it and would, certainly, piece together the real story relating to the tragic event – hopefully. 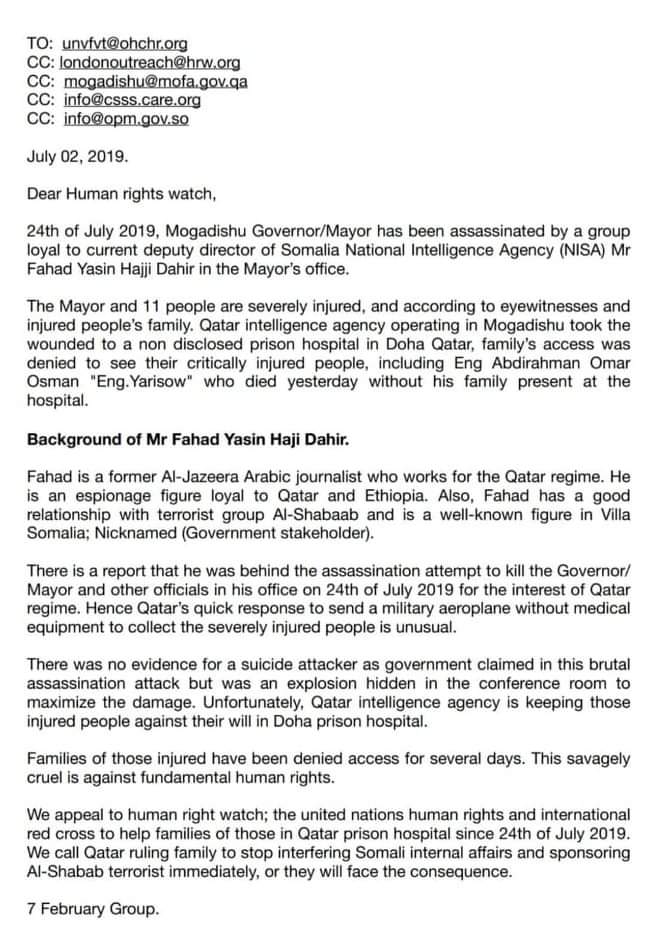