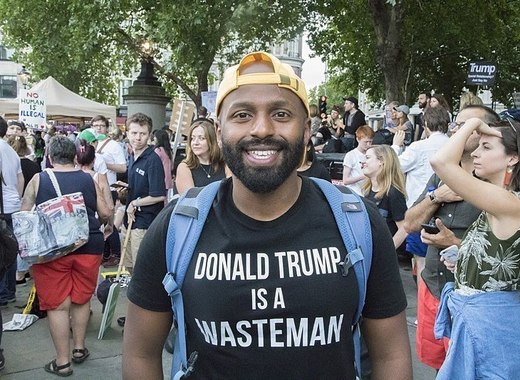 Local governments are usually the authorities closest to their citizens. As heads of such governments, Mayors often bask in unrivalled democratic legitimacy. While some are perfectly content with serving their constituents on the local level for many years, others use their popularity to propel themselves onto the national and international stage and send ripples across the whole world.

This week we take a look at Magid Magid – the former Lord Mayor of Sheffield, the United Kingdom

Who is Magid Magid?

Magid Magid was not an ordinary mayor. First off because he wasn’t really a mayor in the traditional sense, rather he was a Lord Mayor, a radically different position, but we’ll get down to that in a moment. And second, he was born in Burao, Somaliland, Somalia. He and his parents escaped the country right after the start of the Somali Civil War in 1994 and were placed in a refugee camp in Ethiopia. After they were finally permitted to enter the United Kingdom, they moved to Sheffield.

In the following years, Magid studied aquatic zoology at the University of Hull where he got his first taste for politics – as president of the students’ union. In 2014, despite his surroundings being heavily Labour-leaning he joined the Green Party of England and Wales. After working for the party’s city councillors he was himself elected in 2016. In 2018 he was elected by his fellow councillors as Lord Mayor of Sheffield for a one year term. The following year, Magid was chosen to be the Green party’s lead candidate for Yorkshire and Humber in the European Parliament election and became the party’s first ever MEP in the region.

The title of Lord Mayor, while sounding fancy, is nothing compared to what is traditionally understood as mayor. The role is largely ceremonial, with its holder representing the city and city council on official occasions, without actually wielding any executive powers. Nonetheless, becoming Lord Mayor is considered a great honour and Magid Magid had no intention of letting the opportunity go to waste.

He made his first order of business to liven up the role of Lord Mayor and to shake off its archaic nature. To that end, during his inauguration ceremony, the Imperial March from Star Wars was played, followed by the Superman theme. During his one-year term he heavily promoted community engagement – he wanted people to feel like a part of something bigger and something better and invited everyone interested to accompany him on his official duties. He quickly gained fame across the whole of the United Kingdom due to his clashes with hardline Brexiteers and his description of U.S. president Donald Trump as a “wasteman”. He even went as far as banning the president from Sheffield, despite the City Council stating that he actually doesn’t have the power to do so.

We all know the story – there weren’t supposed to be any United Kingdom MEPs in the 2019 legislature. But we can’t help but be glad that Magid Magid won a seat due to the British government’s failure to properly deliver on the results of the referendum.

On his very first day at the job, the 30-year-old MEP was already making headlines. Despite the European Parliament being the most representative of the European Union’s institutions, it’s never been as diverse as the continent itself. Magid Magid was greeted in a cold and aggressive manner with some people asking him to leave the European Parliament’s building. But it wasn’t just that. After his first couple of weeks on the job, Magid voiced his frustrations at the European Parliament’s way of doing things – “Instead of reaching out, people here are burying their heads in the sand”, he stated. And who can argue that that’s not true?

Magid Magid is the perfect example of what Europe can be and should strive to become. The former Lord Mayor’s passion for the European project shows us that the future is bright so long as there are people willing to fight for it.

The Green Wave that swept over Western Europe is evidence enough that citizens are recognizing the role that we as Europeans should play in the global fight against climate change. Furthermore, the far-right’s less than stellar showing is even further proof that voters want Europe to do more rather than take a step back and let people like Matteo Salvini and Nigel Farage take the wheel. And the former Lord Mayor is the embodiment of these significant developments in Europe.

With politicians like Magid Magid, who place engagement with citizens and caring for one’s constituents at the very top of his list of priorities and who don’t mince their words regarding the far right politicians who only want to destroy and instill hatred, there might be some hope after all.

Sheffield’s former mayor is precisely the person who best symbolizes the fight for the European Union’s soul – and we should be thankful for the UK government’s abysmal attempts at solving the Brexit impasse, for without that, Magid Magid would not have stepped into the continental spotlight.