Home Somalia In Guise of ‘Development’, Somalia, Italy Gang Against Somaliland in Absence of... 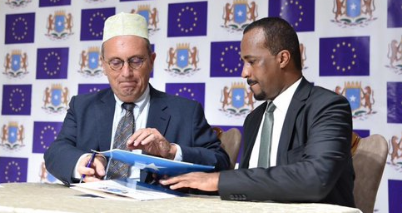 The whole of Somaliland is up in arms again as an Italian-born EU Director-General openly sides with the feeble Somalia government in Mogadishu.

Mr Stefano Manservisi is the EU-Commission Director-general for International Cooperation and Development.. Mr Manservisi is Italian.

For whatever reason or excuse, Mr Manservisi signed a 23-million Euro Project for Somalia on Saturday. The Project was meant to help develop coastal areas. Mogadishu and Berbera were specifically earmarked to benefit.

Sadly, Mr Manservisi did not take into account that Mogadishu had no jurisdiction over Somaliland areas in which is the thriving Red Sea port of Berbera. Somalia had nothing to do – except sabotage – with the more successful Republic of Somaliland since 1991.

The project to, perhaps, intentionally raise the hackles of Somalilanders and rub more salt on the calculated, hurting barb against the country’s sovereignty, named it after a Mogadishu Mayor, Engineer Yarisow, who was recently slain at his office under dubious circumstances.

The Director-General, also, completely ignored the Special Aid Delivery Arrangement which the international partners, including the EU he represented, had working with Somaliland since 2013.

Quite unabashed either of his ignorance or partiality, Mr Manservisi tweeted his happiness:

Happy to sign at #VillaSomalia the 23M€ coastal develpment programme for #Berbera and #Mogadishu with ⁦@AmbGamal⁩ and PM ⁦@HassanAKhaire⁩ pic.twitter.com/DJ9jKoE0aZ

This was followed by a barrage of retorts from indignant Somalilanders, as well as non-Somalilanders. One of them, Marian Robly, taunted Mr Manservisi to come to Berbera with his broadcasted happiness.

Barbara!? 🤔 🤔 🤔 🤔
Come to Barbara and we will see if you can be happy or not.
You and the Mogadishu Mafia. have no right to stolen money from the international community in our name. @mrubin1971 @musebiihi@VPsomaliland

Somalilanders interpreted the move on the part of Mr Manservisi, separating him from the wider EU platform, as open empowerment of Somalia claims against the Republic of Somaliland.

Upon his return from a visit to West African state of Guinea Conakry, president Muse Bihi revealed that Italy put pressure on Guinea not to receive him and his delegation as befitted a head of state.

Italy either colonized or acted as Trustee of Somalia from 1884 to 1960 where Somaliland as only a protectorate under Britain.

Quick to underline the blunder Mr Manservisi made, the government of Somaliland reiterated its stand on aid or development partnership channelled through Mogadishu.

The #Somaliland cabinet has warned all Intern'l Organizations to implement any projects that have not been signed under the name of SL govt. They also urge them to use the national emblem, Map, flag and the name of SL with all their projects' documents – not #Somalia's. pic.twitter.com/NjGJUa984O

#Somaliland Republic is a democratic sovereign state. When it comes to the Humanitarian aid, Somaliland & donors have a Special Arrangement modality. Somaliland has its own National Development Plan in which the donors finance, the Somaliland Development Fund is a good example.

Another Somalilander, Ali Jibril, copied the clearly demarcated maps of Somalia and the Republic of Somaliland on to a Tweet urging the Somaliland media to take part in educating both Somali and non-Somali audiences on how different and far apart the two countries were.

Below sample tweets map the reaction:

Can't believe this is the EU_Commission
Director-General for International Cooperation and Development – an Italian.

Hilarious how Italy, using every trick in the book, is aiding #Somalia to leave no stone unturned to keep claiming sovereignty over @Somaliland.@NBerlangaEU https://t.co/NUssNxLhU9

Is the Government of Somaliland happy to have an EU-FGS development programme for Berbera?

How are you signing money to Berbera for the wrong administration? Berbera is in #Somaliland, @TheVillaSomalia administration and former Somalia Administration has not set foot in Somaliland for 28 years! You are creating more problems with this action #ShameOnYou. @musebiihi

The last time a Somalia president was able to set foot on Somaliland soil was In March 1988. In March 2019 Somalia's appointed president begged Ethiopian PM to take him to Hargeisa.Abiy Ahmed agreed but the Sland govt declined telling the PM he can come only without Somalia prez.

This is an Italian commissioner doing a propaganda favour for the government of Somalia. The devil is in da details. EU has funded projects in Somaliland before without this public stunt. How can you hold responsible the FGS when they don't control Berbera? Devil is in da details

Mr Stefano, you did this because of your nationality and you are Italian and that why you sided with the Somalia-Italian but we will see how @UKinSomalia reacts to this unfair action based on the colonial history.

Correction: BERBERA IS NOT IN SOMALIA BUT IT IS IN SOMALILAND.

Somaliland is not somalia pic.twitter.com/FG5P9Ibxhr