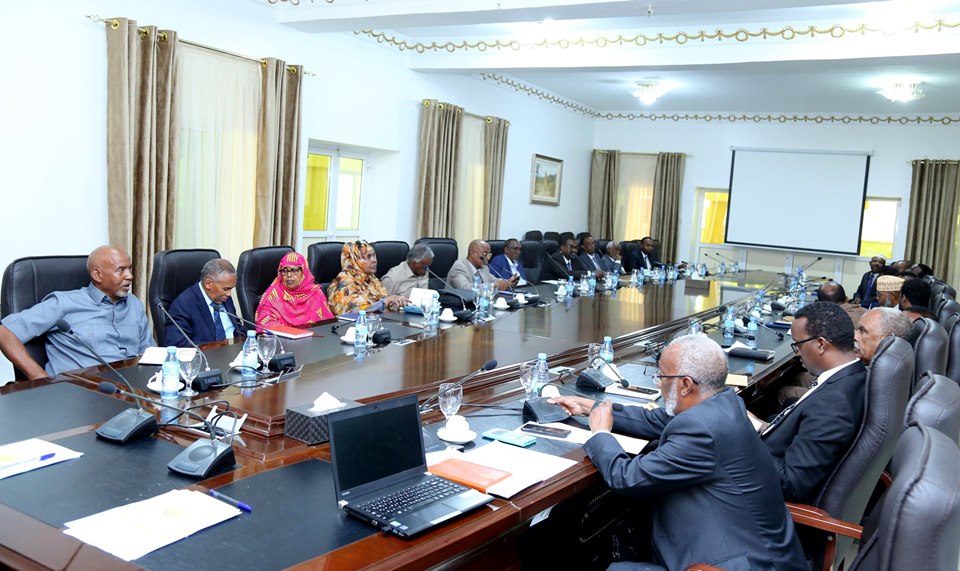 The Cabinet of Ministers of the Republic of Somaliland, on Monday, set benchmarks for a resumption of talks with neighbouring Somalia and modalities for acceptance or otherwise of development aid earmarked for the country.

The Cabinet pointed out five areas which needed immediate attention.

The Ministers, at a meeting President Musa Bihi Abdi, chaired, flanked by Vice President, Abdirahman Abdullahi Ismail, underlined how grateful the people of Somaliland or the continued support of the international community in many areas of development and the flawless cooperation the two sides through the past two decades or so.

The Cabinet, however, alerted UN agencies and other international organizations to the fact that Villa Somalia had embarked on a renewed, hostile campaign against the 28-year-old democracy that Somaliland leaving no stone unturned to claim unwarranted, non-existent sovereignty over the Republic of Somaliland.

Of late,  Somalia started including Somaliland-specific. issues in MOUs it was signing with international partners the last of which being a 23-mln-Euro coastal development project its ministry of planning signed with the EU on Saturday. To, obviously, score a political point, Somalia named the project after a recently slain Mayor of Mogadishu.

The Ministers, in two of the resolutions reached, underscored the importance of addressing aid earmarked for Somaliland to Somaliland authorities only.

“The international community, ambassador and foreign envoys, aid agencies working with and in Somaliland must cooperate with Somaliland fully respectful of the country’s laws cognizant of its sovereign status,” the fourth point stated.

International agencies and foreign missions were also asked to use correct addresses, emblem, and maps in project documents, correspondences, MOUs and reports pertaining to the Republic of Somaliland and to not violate land, sea and airspace boundaries of the nation.

“No project that was not exclusively signed with relevant authorities in the Republic of Somaliland cannot be implemented within the Somaliland boundaries in any form,” the resolution asserted.

On the Somalia/Somaliland talks, the council of ministers re-affirmed the country’s readiness to continue its dialogue with Somalia in three points, and on condition that:

In setting the benchmarks, the government firmly re-emphasized that no more would it tolerate the increasing frequency of open political and economic hostilities which the international community-propped administration of Somalia has accelerated of recent.

The public widely and warmly widely welcomed the Monday resolution of the executive arm of the Somaliland government hailing it as realistic and true to form as acclaimed by the Constitution and the referendum of 31 May 2001.