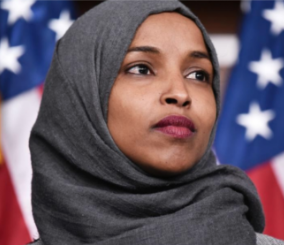 Israel, the country that Ilhan Omar loves to hate, reportedly put out feelers nearly a decade ago indicating its willingness to consider restoring its recognition of Somaliland as an independent state

In the past week, an article entitled ‘CONGRESSWOMAN OMAR TURNS HER BACK ON SOMALILAND SOVEREIGNTY, HAS EYES ONLY FOR HER SOMALIA‘, first published on Frontpage Mag, has been doing the rounds on Somali websites.

It is in an interesting article with a timely reminder that Israel was the first country to recognize Somaliland’s independence from the UK.

emocratic Minnesota Rep. Ilhan Omar gave a shout-out to the land of her birth, Somalia, in honor of its Independence Day. “Happy Independence Day Somalia,” Omar tweeted on July 1st.  “Somalia hanoolaato,” she added, which means “Long live Somalia.” Omar should have included a shout-out to Israel, the country she loves to bash as racist and colonialist, for being the first of 34 countries, including the United States, that recognized Somaliland after it gained independence from the United Kingdom on June 26, 1960. Unfortunately, things did not go as smoothly for Somaliland as its people had hoped for in their yearning to be free, something that Omar neglected to mention in her celebration of her homeland’s independence.

On the other hand, Israel, the country that Omar loves to hate, reportedly put out feelers nearly a decade ago indicating its willingness to consider restoring its recognition of Somaliland as an independent state – this time, independent from the Mogadishu regime. And the people of Somaliland, where Islam is the official religion, appear interested in developing a good relationship with the Jewish State of Israel. Abdirahman M. Dirye is a Somaliland activist and Senior Editor at The Democracy Chronicles, African news edition who wrote that “other Somalis hate Somaliland for its pronounced stand with suffering Jews.” He added, “Somaliland needs not only Israeli economic and military assistance to remain a bulwark against growing terror in the Horn of Africa but also needs world Jews to stand by Somaliland’s outright independence.”

And in an Israellycool first, it seems a foreign government was forced to deny a report of mine.

Somalia’s government in Mogadishu fired a high-level official in its Foreign Ministry for daring to suggest that it would be a good idea for the Somali government to establish diplomatic relations with Israel. “It is in our interest to welcome Israel,” he wrote, while criticizing the Palestinians for being their own worst enemies. Also, Somalia’s envoy to Switzerland and representative to the United Nations in Geneva drew the ire of her bosses when she abstained from a United Nations Human Rights Council condemning Israel over its control of the Golan Heights. The Somali Foreign Ministry immediately summoned her to return to Mogadishu.

A report claims that Somali Foreign Minister Ahmed Isse Awad took the action to summon the ambassador only after receiving a call from Congresswoman Ilhan Omar. The Somali government denied the report, which could not be verified. The report is plausible, however, since Omar and the foreign minister do know each other. Moreover, Omar endorsed Somalian President Mohamed Abdullahi Mohamed (known as “Farmaajo”) in an election described as one of the “the most fraudulent political events in Somalia’s history.” Omar’s brother-in-law, who is a U.S citizen, by no coincidence entered Somalia’s government as the permanent secretary of Farmaajo’s hand-picked prime minister. Nevertheless, despite (or probably because of) her high-level connections with the corrupt Somali government, Omar has done nothing as a member of the House Foreign Affairs Committee to help the people oppressed by that regime.

My report was based on a tip from an Israellycool reader, who received this information from an “anonymous foreign government source”, for whom they vouched. I have since spoken with this same source, and I can say they are legit. I have very little doubt that Omar did what was claimed.