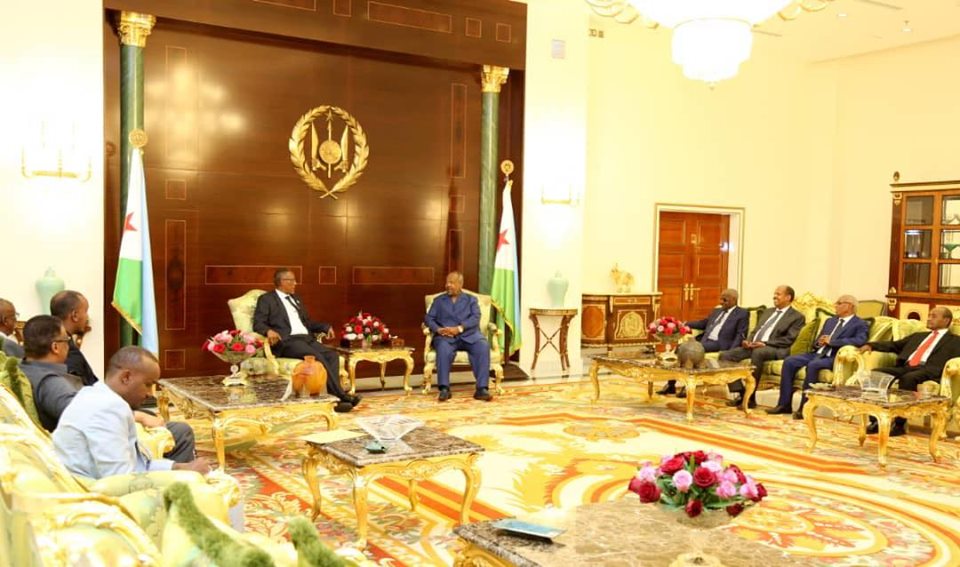 The two Presidents of the Republic of Somaliland and Djibouti, Musa Bihi Abdi and Ismail Omar Ghuelleh, met at the latter’s presidential palace, Tuesday, following a four-day official visit President Bihi has made to the tiny neighbour country.

The two presidents, it was reported talked on matters relating to cooperation on economy, information, and security.

“It is quite normal that brotherly nations who are neighbours, too, should come together from time to time,” Professor Yassin Haji Mohamoud ‘Faratoon’, RoS Minister for Foreign Affairs and International Cooperation, told the press.

“Discussions will touch on cooperation on many spheres – political, economic and security among them,” he added.

Mohamed Ali Youssef, Djiboutienne Minister for Foreign Affairs and International Relations, elaborating on the Somaliland delegation visit added that the two sides will not only be talking of fresh political, economic and security issues but, also, specifically on the implementation of previous MOUs.

“Earlier protocols between the two sisterly nations ass well as cooperation on political, economic and fishery issues will be further developed during this high-level delegation,” Minister Youssef said.

The Somaliland delegation, led by the President of the Republic, His Excellency Musa Bihi Abdi, was received at Humbuli international Airport by the Djiboutienne Prime Minister Abdulkadir Kamil, the Foreign Minister, Mohamed Ali Youssef and a score of other top Djibouti government officials.

Immediately afterwards, President Bihi was whisked off to the presidential palace where the two presidents held a meeting covering said areas and more.

The two presidents shared their take of the meeting with the public on their Twitter accounts, respectively, with Ghuelleh stating that the meeting centred only on economy, trade and information/communications issues.

We had a meeting with H.E. @IsmailOguelleh, the President of the Republic of Djibouti as part of an official State Visit to Djibouti. We discussed profoundly ways to bolster the two nations' bilateral collaboration on economic development, trade and the regional security as well. pic.twitter.com/DkipnfzOaO

The reception would have been faultless if one only looked at the calibre of the welcoming committee, the red carpet rolled out, the guard of honour and all but the absence of two very conspicuous items rubbed salt on Somaliland pride and integrity, hurting it badly. For one, the Djiboutienne officials and its media side-skirted the use of the word ‘republic’ in reference to Somaliland. Secondly, the official tri-colour flag of the Republic of Somaliland was nowhere to be seen at the sitting arrangements at the airport reception and at the meeting with President Ghuelleh.

The omission was interpreted as an intentional slight to put down the Republic of Somaliland and keep the favour of Villa Somalia, instead.

Djibouti, unofficial sources confided, was also keen on convincing Somaliland to not object to a membership of the international mediation team during the expected Somaliland/Somalia talks.

The Djiboutienne First Family, too, has an eye on the Somaliland Islands of Sa’adadiin and Ebad to turn them into ambitious tourist destinations.

Fishing off Somaliland shores cheaply and selling hauls off to willing, high-paying patrons is another motive Djibouti had of the invitation it extended to president Bihi and his delegation who besides the foreign Minister, and the Minister of Defense, Atteye Farid, included Minister Hassan Mohamed Ali ‘Gaafaadhi’ of Livestock and fisheries.

President Bihi and his delegation toured a number of plants and businesses on their second day of the visit, including the Djibouti Free Zone and Arta (see pictures at bottom of article).

The Somaliland public, however, did not take kindly to president Bihi honouring Djibouti with this kind of visit given the open support the tiny Red Sea country accorded Somaliland’s No. 1 rival, Somalia, on almost every occasion and opportunity.

A month has not passed since President Farmajo of Somalia made a visit to Djibouti where President Ghuelleh was reported to have accepted him as an authority on Red Sea issues despite Somaliland’s sovereignty over the longest stretch of the Sea, not Somalia. The Ghuelleh gesture was seen as another calculated slight of Somaliland sovereignty.

Public opinion in Somaliland was not exactly of striking any kind of deal with an unapologetic Djibouti on 10:1 ratio.

1988 jubbuuti supported faqash.. They still do close border,, talk is cheap, and you talk alot

It was only a week or so when #Djibouti's Ghuelleh was awarding jurisdiction over the Red Sea to @M_Farmaajo as if he owned it.

He did that fully well knowing the @Somaliland stand on issue.

He wasn't any better in the past, too – an arch-enemy of #Somaliland sovereignty.

The president of Djibouti also shared this picture on his handle, just incase. pic.twitter.com/HJip0W4LFS