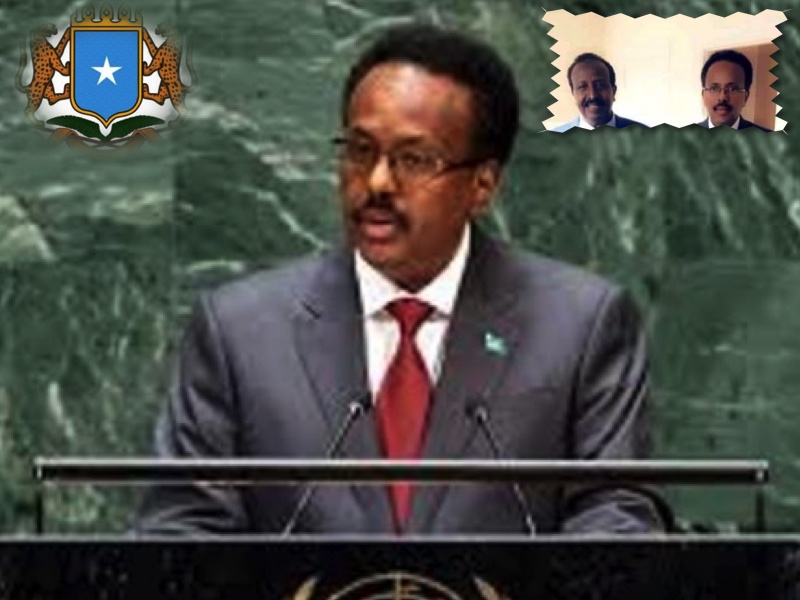 Somalia is “the perfect example of the success of the multilateral system,” President Farmajo

Somalia is “the perfect example of the success of the multilateral system,” President Mohamed Abdullahi Mohamed told the UN General Assembly on Thursday while acknowledging that the Horn of Africa country still needed international and regional support and cooperation, particularly to deal with threats from Al-Shabab.

Somalia’s progress towards reconstruction was moving ahead, but Mr. Mohamad said “one cannot remain deaf and blind” pockets of global discontent and the effects of poverty, inequality and unfair globalization.

He noted that Somalia played a leading role in the socio-economic development of the Horn of Africa and expressed confidence that cooperation among countries in the region would only strengthen political stability and social and cultural connectivity.

He went on to express his country’s pride after the success of the regional elections in some of the Federated States ahead of the 2021 presidential and legislative elections.

And while he called Somalia “historic” example of reform, resilience and commitment to progress and reconstruction, he cautioned that despite tangible progress, the country still faced many challenges, first and foremost those related to security, on which “everything depends”.

“With the help of our international partners, we are striving to rid ourselves of the last pockets of violent extremism and terrorism,” he said, stressing that the task would not be easy, especially given the “violence, cowardice and opportunistic guerilla tactics of Al Shabab.”

But Mr. Mohamed said he is confident that with the help of the African Union Mission in Somalia (AMISOM) and other partners, his country will regain stability, which was in the interest of the region and the world.

Turning to one of the key issues before Member States, climate change, he said Somalia which had the longest coastline on the African continent, was already experiencing the effects of rising waters and temperatures. Somalia was also impacted by land degradation, long-term drought and deforestation.

Mr. Mohamed reiterated his commitment to the Paris Agreement, but also to Security Council resolution 751 (1992), which called on all States to take the necessary measures to prevent the direct and indirect import and export of Somali coal.

“It may not save the environment, but it will definitely deprive terrorists of a source of funding,” he said.

Somalia  officially the Federal Republic of Somalia  is a sovereign statewith its territory located in the Horn of Africa. It is bordered by Ethiopiato the west, Djibouti to the northwest, the Gulf of Aden to the north, the Guardafui Channel and Indian Ocean to the east, and Kenya to the southwest. It is separated from Socotra by the Guardafui Channel in the northeast. Somalia has the longest coastline on Africa‘s mainland, and its terrain consists mainly of plateaus, plains and highlands. Climatically, hot conditions prevail year-round, with periodic monsoon winds and irregular rainfall.

In terms of culture, religion, ethnicity and linguistics, it has been described as the “only”and the “most” homogeneous country in Africa. Somalia has an estimated population of around 14.3 million. Around 85 per cent of its residents are ethnic Somalis, who have historically inhabited the northern part of the country. Ethnic minorities are largely concentrated in the southern regions. The official languages of Somalia are Somali and Arabic, both of which belong to the Afroasiatic family. Most people in the country are Muslim, with the majority being Sunni.

In antiquity, Somalia was an important commercial centre. It is among the most probable locations of the fabled ancient Land of Punt. During the Middle Ages, several powerful Somali empires dominated the regional trade, including the Ajuran Empire, the Adal Sultanate, the Warsangali Sultanate, and the Sultanate of the Geledi.

In the late 19th century, through a succession of treaties with these kingdoms, the British and Italian empires gained control of parts of the coast and established the colonies of British Somaliland and Italian Somaliland. In the interior, Mohammed Abdullah Hassan‘s movementrepelled the British Empire four times and forced it to retreat to the coastal region, before succumbing to defeat in 1920 by British airpower. The toponym Somalia was coined by the Italian explorer Luigi Robecchi Bricchetti (1855–1926). Italy acquired full control of the northeastern, central and southern parts of the area after successfully waging the so-called Campaign of the Sultanates against the ruling Majeerteen Sultanate and Sultanate of Hobyo. Italian occupation lasted until 1941, yielding to British military administration. British Somaliland would remain a protectorate, while Italian Somaliland in 1949 became a United Nations Trusteeship under Italian administration, the Trust Territory of Somaliland. In 1960, the two regions united to form the independent Somali Republic under a civilian government.

The Supreme Revolutionary Council seized power in 1969 and established the Somali Democratic Republic. Led by Mohamed Siad Barre, this government later collapsed in 1991 as the Somali Civil Warbroke out. Various armed factions began competing for influence in the power vacuum, particularly in the south. During this period, due to the absence of a central government, Somalia was a “failed state“, and residents returned to customary and religious law in most regions. A few autonomous regions, including the Somaliland and Puntlandadministrations, emerged in the north. The early 2000s saw the creation of fledgling interim federal administrations. The Transitional National Government (TNG) was established in 2000, followed by the formation of the Transitional Federal Government (TFG) in 2004, which reestablished national institutions such as the military.[5][5][29] In 2006, the TFG, assisted by Ethiopian troops, assumed control of most of the nation’s southern conflict zones from the newly formed Islamic Courts Union(ICU). The ICU subsequently splintered into more radical groups such as Al-Shabaab, which battled the TFG and its AMISOM allies for control of the region.

By mid-2012, the insurgents had lost most of the territory that they had seized. In 2011–2012, a political process providing benchmarks for the establishment of permanent democratic institutions was launched. Within this administrative framework a new provisional constitution was passed in August 2012, which reformed Somalia as a federation. Following the end of the TFG’s interim mandate the same month, the Federal Government of Somalia, the first permanent central government in the country since the start of the civil war, was formed and a period of reconstruction began in Mogadishu. Somalia has maintained an informal economy, mainly based on livestock, remittances from Somalis working abroad, and telecommunications.

Somalia has been inhabited since at least the Paleolithic. During the Stone Age, the Doian and Hargeisan cultures flourished here. The oldest evidence of burial customs in the Horn of Africa comes from cemeteries in Somalia dating back to the 4th millennium BCE. The stone implements from the Jalelo site in the north were also characterized in 1909 as important artefacts demonstrating the archaeological universality during the Paleolithic between the East and the West.

According to linguists, the first Afroasiatic-speaking populations arrived in the region during the ensuing Neolithic period from the family’s proposed urheimat (“original homeland”) in the Nile Valley, or the Near East.

The Laas Geel complex on the outskirts of Hargeisa in northwestern Somalia dates back around 5,000 years, and has rock art depicting both wild animals and decorated cows. Other cave paintings are found in the northern Dhambalin region, which feature one of the earliest known depictions of a hunter on horseback. The rock art is in the distinctive Ethiopian-Arabian style, dated to 1,000 to 3,000 BCE. Additionally, between the towns of Las Khorey and El Ayo in northern Somalia lies Karinhegane, the site of numerous cave paintings of real and mythical animals. Each painting has an inscription below it, which collectively have been estimated to be around 2,500 years old.

Ancient pyramidical structures, mausoleums, ruined cities and stone walls, such as the Wargaade Wall, are evidence of an old civilization that once thrived in the Somali peninsula. This civilization enjoyed a trading relationship with ancient Egypt and Mycenaean Greece since the second millennium BCE, supporting the hypothesis that Somalia or adjacent regions were the location of the ancient Land of Punt. The Puntites traded myrrh, spices, gold, ebony, short-horned cattle, ivory and frankincense with the Egyptians, Phoenicians, Babylonians, Indians, Chinese and Romans through their commercial ports. An Egyptian expedition sent to Punt by the 18th dynasty Queen Hatshepsut is recorded on the temple reliefs at Deir el-Bahari, during the reign of the Puntite King Parahu and Queen Ati. In 2015, isotopic analysis of ancient baboon mummies from Punt that had been brought to Egypt as gifts indicated that the specimens likely originated from an area encompassing eastern Somalia and the Eritrea-Ethiopia corridor.

In the classical era, the Macrobians, who may have been ancestral to Somalis, established a powerful tribal kingdom that ruled large parts of modern Somalia. They were reputed for their longevity and wealth, and were said to be the “tallest and handsomest of all men”.The Macrobians were warrior herders and seafarers. According to Herodotus’ account, the Persian Emperor Cambyses II, upon his conquest of Egypt (525 BC), sent ambassadors to Macrobia, bringing luxury gifts for the Macrobian king to entice his submission. The Macrobian ruler, who was elected based on his stature and beauty, replied instead with a challenge for his Persian counterpart in the form of an unstrung bow: if the Persians could manage to draw it, they would have the right to invade his country; but until then, they should thank the gods that the Macrobians never decided to invade their empire. The Macrobians were a regional power reputed for their advanced architecture and gold wealth, which was so plentiful that they shackled their prisoners in golden chains.