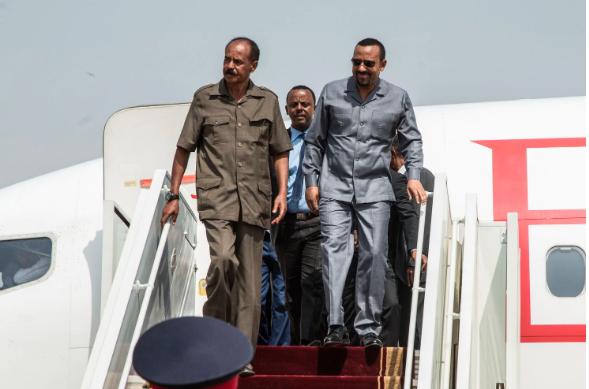 Ethiopian Prime Minister Abiy Ahmed Ali was announced as the winner of the Nobel Peace Prize on Friday, with the committee that decides the awards singling out his efforts to achieve peace with neighboring country Eritrea.

But notably, the prize was not awarded to Eritrean President Isaias Afwerki, Abiy’s partner in the talks.

Instead, Nobel Committee Chairman Berit Reiss-Andersen simply acknowledged that “peace does not arise from the actions of one party alone” and said that they hope the “peace agreement will help to bring about positive change for the entire populations of Ethiopia and Eritrea.”

In some years, the Nobel Peace Prize has been awarded to multiple parties for their work trying to end a conflict. In 1994, for example, the prize was awarded to Israel’s Shimon Peres and Yitzhak Rabin, as well as Palestinian leader Yasser Arafat.

But the decision to only award the 2019 Nobel Peace Prize to Ethiopia’s Abiy was hardly surprising. Eritrea’s Isaias leads one of the most repressive military dictatorships in the world; his government has been compared to North Korea and accused of possible crimes against humanity.

And though he has reached an agreement with Abiy in Eritrea’s capital last year to end the conflict between the two nations, in practice the agreement remains largely unimplemented, and there have been little visible benefits for Eritreans.

“I think here was a lot of hope in Eritrea,” said Laetitia Bader, a researcher at Human Rights Watch, “But very quickly, Eritreans saw that things were not changing on the ground.”

“I’d say it has brought no positive developments for the Eritrean people, because the lived reality is the same more than a year after the peace deal,” said Vanessa Tsehaye, an Eritrean activist based in London.

The conflict between Eritrea and Ethiopia stretches back decades. After European powers left occupied Eritrea in 1951, landlocked Ethiopia claimed the land of its coastal neighbor, eventually resulting in a civil war that started in 1961 and lasted three decades.

However, the two nations did not reach an agreement on the border between them, and in 1998, small-scale border incidents around the town of Badme grew into a full-fledged conflict. It’s estimated that almost 100,000 people died, and after it ended, Ethiopian troops had control of Badme and other disputed areas.

As part of a peace agreement brokered in Algiers, in 2000, a commission cited colonial-era documents to rule that the land around Badme was part of Eritrea. But Ethiopia did not agree to the arbitrated border, and the two sides remained in a standoff.

Their relationship was dubbed “no war, no peace,” which meant that diplomatic, trade and transport ties were severed, and the countries remained on a war footing, clashing repeatedly and supporting rival rebel groups.

Abiy, a former intelligence officer who had taken part in the operations to drive Eritreans out of Badme, took office as Ethiopia’s prime minister in April 2018 and almost immediately began reforms in the country, which had long been ruled by authoritarian governments.

On June 5 2018, Abiy made a key pledge to accept the peace agreement with Eritrea and withdraw Ethiopian troops from occupied territory. Within weeks, Isaias responded by saying that both nations yearned for peace.

Just a month after Abiy’s announcement on July 8, the Ethiopian leader touched down at the airport in Eritrea’s capital Asmara, where he was greeted by Isaias. The leaders embraced and later announced they would reopen embassies, allow direct communications and restore transport links.

“Love is greater than modern weapons like tanks and missiles,” Abiy said. “Love can win hearts, and we have seen a great deal of it today here in Asmara.”

Despite the signs of good will, critics say not much has actually changed between the two nations. Among the Eritrean diaspora, many voiced disapproval for the Nobel Peace Award for focusing on the agreement with Eritrea when so little had changed in practice.

“I didn’t know one could win a peace award without achieving peace!” Selam Kidane, a London-based activist wrote on Twitter.

Border crossings between Ethiopia and Eritrea were opened last year, but Eritrea soon closed the border again. Analysts suspect that Eritrea, which has virtually complete control over its citizens, is dragging its feet due to fears about wider reform.

Isaias, a former freedom fighter, has led the country since 1993, and his government has left no room for opposition. In 2015, the United Nations released the results of year-long investigation into human rights in the country, finding “systematic, widespread and gross human rights violations,” including extrajudicial killing, torture and forced labor.

Bader said that there was little evidence that there had been any positive change to some of the most restrictive elements, such as the arbitrary arrest of people for perceived political crimes, or the indefinite national service that sees many Eritreans permanently conscripted to the military.

“The government has often argued that it was the ‘no war, no peace’ situation with Ethiopia was what forced it to conscript its whole population,” Bader said.

Jeffrey Smith, the director of Vanguard Africa, said that he viewed the Nobel Prize as “encouraging Prime Minister Ahmed and the new regime in Ethiopia as much if not more than it is about the progress already made.”

But for activists such as Tsehaye, the peace deal had helped legitimize Isaias, the leader of an isolated and repressive nation of just 5 million people on the world stage. The Eritrean leader had traveled with Abiy to foreign nations, and the United Nations lifted sanctions on Eritrea.

“Peace is always a good thing, it’s never something that we should be against,” said Tsehaye, “but we need to understand peace beyond its literal meaning of no war.”

Adam Taylor writes about foreign affairs for The Washington Post. Originally from London, he studied at the University of Manchester and Columbia University. Follow

Original Title: Why Eritrea didn’t win a Nobel for its peace accord when Ethiopia did. 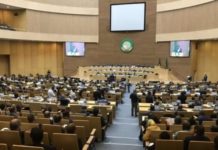