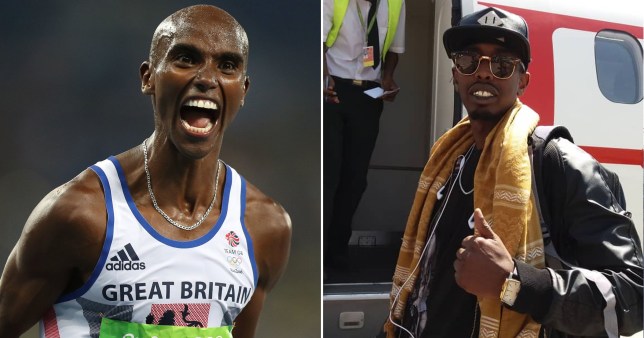 Mo Farah’s brother has ended up homeless and destitute after being deported to Somalia for his role in a knife raid.

Ahmed Farah, 30, was sent to the country of his birth after serving four-and-a-half years in prison and spending two years on the Home Office’s radar.

He was jailed for false imprisonment in 2011 over his involvement in a raid in west London the previous year. Ahmed now wants to return to the UK, arguing he was never given a chance to show he had changed.

He told the Sunday Mirror: ‘I made a huge mistake, but why should I be double punished for something I’ve done?

Ahmed Farah, 30, says he was put on a plane to a country that was ‘completely alien’ to him (Picture: Mirrorpix)

‘It’s like they’re saying “Do the prison time but also do extra detention and be deported”.’

Speaking from Burao in Somaliland, an autonomous region of Somalia, Ahmed explains how his documents were confiscated when he was released on licence in 2014 as he was not a UK citizen. Unable to work without papers or a National Insurance number, he was monitored with an electronic tag and weekly appointments until being deported in 2016.

Penniless, he found an uncle who took him in but now lives from sofa to sofa and has not seen his family in three years. Ahmed says he has not spoken to Mo, 36, for 10 years but holds no grudges against him and insists he had nothing to do with his deportation.

However, he suspects his brother’s status counted against him after it was suggested Mo had ties to Somaliland which would have helped the younger sibling settle in. Ahmed said that he would have acted differently had he known where his crime would land him.

He told the Mirror: ‘I had just turned 20. I can’t blame it on anything. I made a mistake. He added: ‘When Mo was around he was an older brother to me, but I had to learn everything for myself.’

Ahmed was three years old and Mo eight when they moved to Britain with their third brother Wahib and father Muktar in 1991.

Mo’s twin brother Hassan remained in Somalia, which was in the grip of a civil war. A few years later the family moved between council estates after suffering racist abuse, but Mo stayed with his aunt as his dad felt she was better able to support his sporting ambitions. The brothers gradually fell out of touch as Mo drove for Olympic glory.

The knighted long-distance legend is now married with three kids and lives between London and the US.