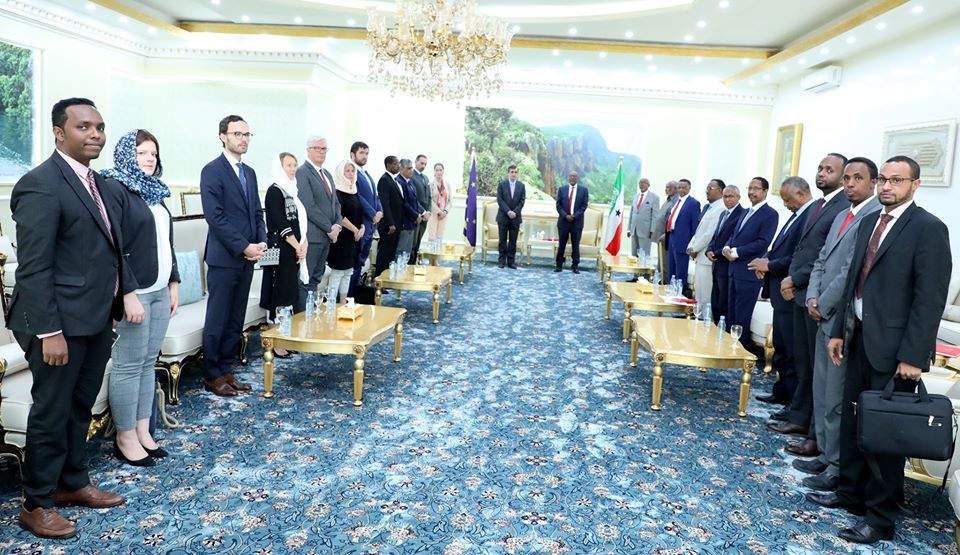 The delegation, led by Ambassador Nicolas Berlanga Martinez of the EU in Somalia/Somaliland, met with the President of the Republic of Somaliland, leaders of the Guurti and the House of Representatives and a covey of Ministers at the Presidency Thursday.

Ambassador Berlanga told the press that the international community, friends of Somaliland’s democracy, wished to see oft-postponed elections he held as scheduled (before the controversial extensions), and that should be conducted by mid-2020, next year.

The Presidency, on its part, stated that the government of Somaliland was ready to fully implement the mediation committee’s proposal regarding the elections once the political parties ironed out among themselves all prevailing technical and legal hurdles currently blocking that eventuality.

“The two sides discussed issues revolving around the parliamentary and local councils elections, resolving discord among political parties relating to the composition of the electoral commission, continuation and increase of development assistance,” the statement said.

The Presidency tweeted an abridged version of issues discussed as below.

The President of Republic of Somaliland H.E. @musebiihi received a high level delegation led by the EU ambassador @NBerlangaEU.
Discussed a wide range of issues including the support of the Int'l Community on Somaliland's electoral process, aid & the national development agenda. pic.twitter.com/TkyRRzDlml

During its two-day stay -and before it met the President, the delegation met with the voluntary mediation committee whose proposal defused tensions, the three political parties and the non-state actors forum with whom it raised how crucial it was to continue support of timely elections and the creation of an infallible momentum to realise that objective.

Tweets below map views expressed of the different meetings the delegation held with the different actors on Wednesday and Thursday.

It was meaningful for the international community to sit with CSOs and hear their version of the progress that Somaliland is making towards the elections. pic.twitter.com/SdExIkOUqp

#Somaliland CSOs platform is reforming and finding its voice and are uniting to tackle pressing issues that will effect the wider community. Our approach is inclusive, consultative and responsive. pic.twitter.com/qTPLAdbD6B

It was meaningful for the international community to sit with CSOs and hear their version of the progress that Somaliland is making towards the elections. pic.twitter.com/SdExIkOUqp

Meeting with civil society about elections in Somaliland: eagerness to be actors in the political life, youth and women want to participate in the management of public life pic.twitter.com/2zruS1dwK3

Glad to Receive a joint mission of Ambassadors, UN,& Igad,led by @NBerlangaEU.#Somaliland has made huge achievements in democratisation,the road has often been bumpy,with delays & disagreements, but the process is always peaceful,actual elections are always fair&freely contested pic.twitter.com/Z5GjX74M0k

I would like to praise the extraordinary work done by the mediation committee proposing a way forward towards the much needed parliamentary & local elections in Somaliland. Partners are happy to support the work of the committee and encourage the implementation of the agreement pic.twitter.com/ejG9l3mODZ

We had very productive meeting with the international community delegation. We need an election in 2020 and we must get one. #Somaliland #Election2020 #democracy pic.twitter.com/HoHSIZ9yNZ