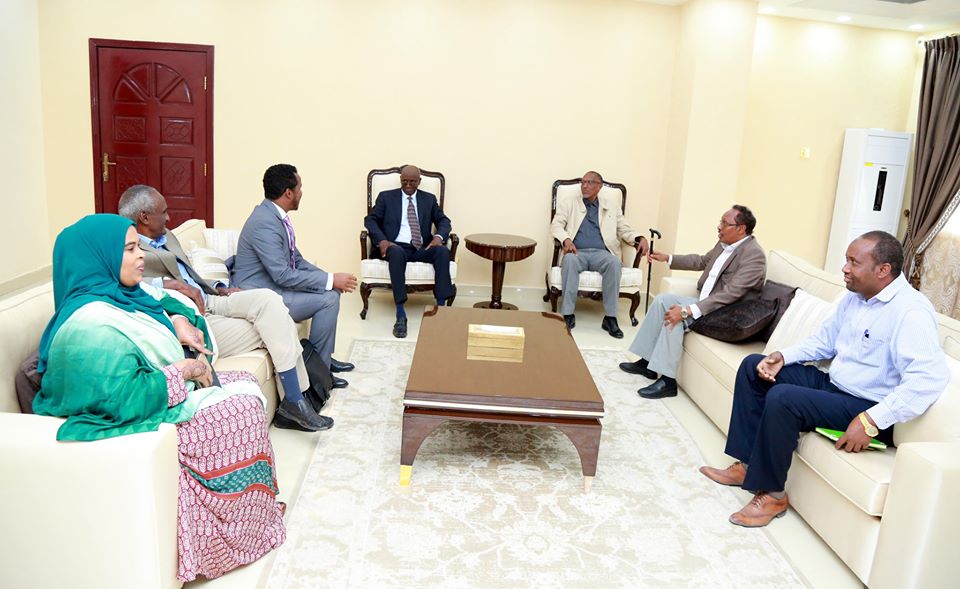 Briefly – and inadequately – explaining the underlying objective(s) of the meeting and its outcome, a statement from the President, Tuesday, tersely stated that His Excellency the President of the Republic of Somaliland, Musa Bihi Abdi, met with the newly sworn-in National Electoral Commissioners at his office in the morning.

The statement said that the President went over critical issues which have proven stumbling blocks for timely and generally sought-after elections to decide new honourable members for both the lower House of the Parliament, the House of Representatives, and local councils.

President Bihi, the statement added, told the commissioners the importance which fairly and freely held democratic elections epitomized for the country.

The statement, however, stopped short of the most important piece of information which was expected of  the meeting: how the president intended to resolve the controversy surrounding their nomination and composition in line with the recommendation of the voluntary mediation committee.

The Committee recommended that the newly installed Commission be dissolved and that the old one be reinstated. Although Waddani had wasted precious national time spanning over 24 months calling for the disbandment of the previous before the term ended, it, however, accepted the committee recommendation. and so did the other two national parties one of which the opposition UCID and the government.

International partners who largely bankrolled the electoral process a representation of which visited the country earlier during the week approved the recommendation condoning all five steps proposed central of which was the resignation of the new commission to pave the way for either the old one or a less controversial line-up.

President Bihi had broken one of the barriers which resulted of the less-than-complete nomination of the present roster of commissioners by meeting the leaders of the two opposition parties only yesterday, Monday, to reassure them that he was sincere about complying with the committee proposal as a whole.

What the Presidency statement was concluded with raised some alarm in certain quarters, though.

“The Commissioners, on their part,” the statement said, “briefed the President of what they have achieved since they were sworn in a month ago, and what they have scheduled for in the near future”.

This statement was incongruously out of place at a crucial juncture of time, and at such a critical meeting, closely following behind so many calls for the early termination of their hardly-begun term in office.

Informed sources close to members of the new commissioners reveal, in confidence, that the President gave the new NEC tcommissioners he go-ahead to go about their business as if there was nithing amiss involving them. If that is the case, that means the president has no intention of putting e executive motions to resolve the bottleneck. Neither would the term extensions or NEC nominations be reversed.

The nation expects nothing short of what the President promised: to hold the elections by mid-2020 as both the international community and the opposition parties urge, in line with the mediation committee’s general outline in timing – a happenstance which automatically cancels the lengthy extensions of term the Guurti gave itself and its sibling – the lower house.