The administration of the Federal Somalia State of Puntland arraigned four traditional leaders and a prominent politician in the Red Sea port court of Bossasso, Wednesday, on ‘public incitement’ and ‘threat to security’ charges.

The federal prosecutors charged the elders for actively seeking to incite public unrest to thwart development programmes planned for Bossasso seaport, a city electrification project and a few additional programmes spanning over roads and other infrastructure schemes.

The procedure was to start the hearings relating to the governments’ case against the litigates and not to arrive at a sentence, sources said.

The projects were part of a controversial deal the former government of Puntland under Dr Abdweli Mohamed Ali Gass reached with a subsidiary company of the Emirates’ DP World in 2017. Abdiweli granted the UAE ports manager a thirty-year concession to develop the port. The other side projects were appended to the deal by Saeed Abdullahi Deni’s government after he ascended to the presidency in 2018. 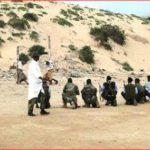