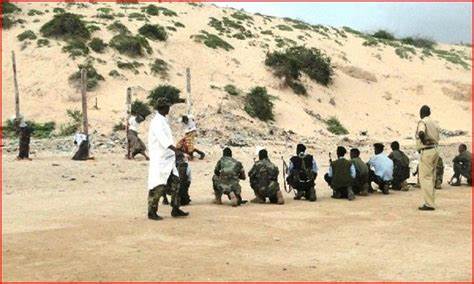 The fighters who had been waging a constant battle with the Somalia national army and with some of its satellite, federal states for over a decade now, accused two of the men of belonging to SNA and the Jubaland armed forces. They charged the third man of complicity with the Kenyan Defence Forces (KDF), who come under the AU’s AMISOM peacekeeping forces, in the Hoosingow area.

The men were identified as:

In another development, the Shabaab fighters have taken over fresh areas in the Hiiraan region of the Hiorshabelle Federal State of Somalia.

Al Shabaab took over El Addeh and adjacent areas, Sunday,  the reports indicate, without much of a fight. Local militias who controlled the areas fled before the Islamists onslaught without putting up a fight. Reports add the militias, however, are regrouping in an area not that far from where they had left and may or may not mount a retaliatory raid on the Shabaab positions in the coming two or three days.

The Islamists have, the day before, reconnoitered other key areas such as Farlibaax testing the strength of the local militias and/or the possible presence of any other security elements in the vicinity before settling for the occupation of El Adde which was strategically more suited as a base of operations.

Al Shabaab appears to be consolidating its inward spiralling of influence around the Federal State capital of Beledwein reducing the distance to within less than a 50-kilometre radius around it.

Hiiraan is one of the strongholds of Al Shabaab where they virtually control almost all areas outside the main urban centres of Beledwein, Buulaberde, Jowhar and Bal’ad. The fighters openly operate Islamic courts where both complainants and plaintiffs come from all adjacent regions seeking Sharia justice which the fighters practice.