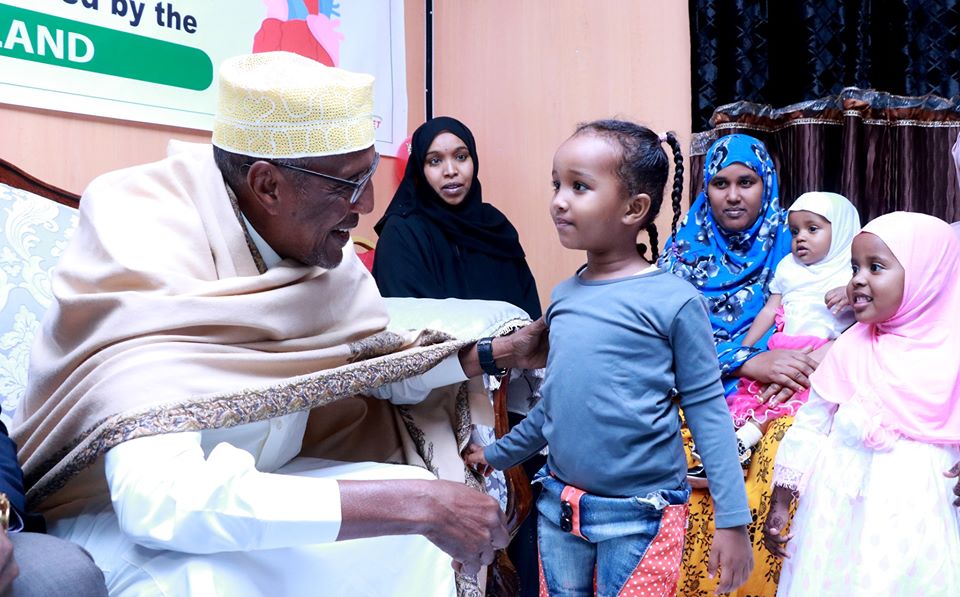 The president of the Republic of Somaliland, Muse Bihi Abdi visited a private hospital in the capital that introduced a cutting edge treatment for children with congenital heart defects.

On Sunday evening, President Bihi was on a date with little angels. He visited the Gargaar Metro Cardiac Center which in collaboration with the government surgically treats children with atrial septal defects. This heart condition is a hole in the wall between the two upper chambers of the heart which babies are born with.

The president was participating in the celebration of the first successful batch of heart surgeries in the country. It was these happy little children who were first treated for this condition in Somaliland.

The government has paid for the surgeries of the children that went were treated since most of their families could not afford it.

In a brief speech, the president thanked the doctors at Gargaar Hospital which is the front of the developments in healthcare service in the country.

He also underscored that healthcare is a basic human right that should not be subjected to discrimination based on nationality, race or religion.

President Bihi said he learned that from the physicians at the Gargaar Hospital who had insisted on treating the enemy soldiers the same treatment as the freedom fighters in Somaliland’s independence war.

Sickness doesn’t recognize a tribe or a nation. It is just disease and all people who are sick are equal. And for the Somali speaking people from anywhere, this is their city. They are welcome in their city where they can enjoy security and all the rights of the local residents in health care. I learned that from these four doctors sitting with us tonight who and I share a long history..

The president then had amicable chats with the children, mostly under five, who were successfully treated for their heart conditions. According to the doctors, they will lead healthy and normal lives from now on, and their parents couldn’t be happier.