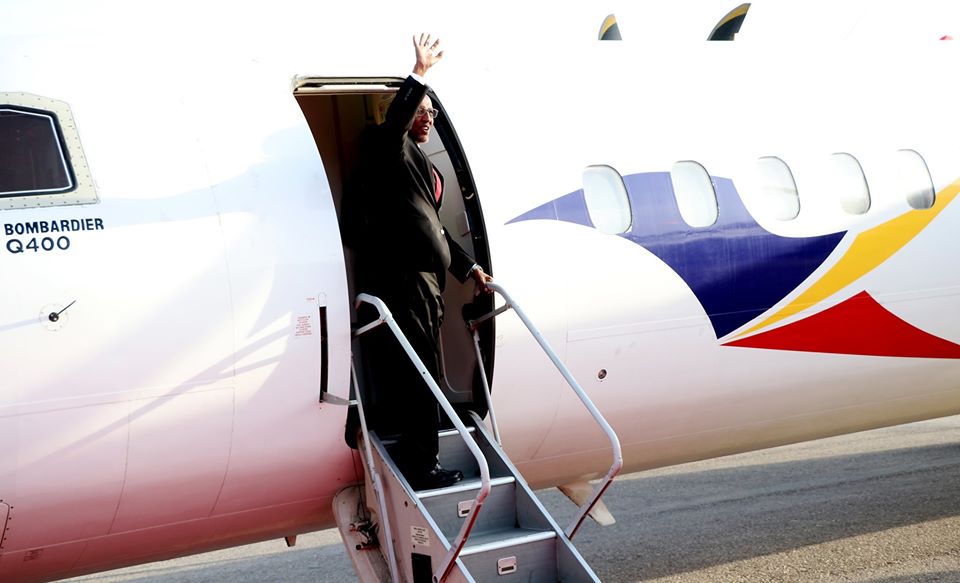 Hargeisa, Somaliland (Somtribune) — His Excellency the President of the Republic of Somaliland, Musa Bihi Abdi, and the delegation he led were received at Bole International Airport by Ethiopia’s State Minister for Foreign Affairs, Dr Aklilu Hailemecheal, upon arrival, Sunday.

President departed for Addis Ababa, Ethiopia, where the Heads of African states are convened at the 23rd AU Summit.

According to a brief statement the Presidency released, Sunday, the President has scheduled meetings with a number of leaders and diplomats across the continent.

His Excellency the Minister for Foreign Affairs, Professor, Yassin Mohamoud Hiir ‘Faratoon’, assisted by several notable Somaliland diplomats, including the very formidable, Abdullahi Mohamed Haji Duale, the Somaliland rep at the AU centre and a former foreign minister of the republic, has been moving among the leaders weaving diplomatic splices together, bridging gaps where needed, dissipating misconceptions about Somalialnd’s restoration of its independence and correcting implanted fallacies where necessary, according to confidential sources.

The president, who flew out in the afternoon, would be there for an unspecified number of days, depending on the course of events.

On this trip, President Bihi is accompanied by the Minister for Agriculture, Mohamed Mumin Seed,  Livestock Husbandry and Fisheries, Saeed Sulub Mohamed, Minister for Constitution and Coordination of Councils, Mohamed Haji Adan, and Dr Osman Sheikh Ahmed, Economic Advisor to the President.

It is noteworthy that the President of Mogadishu’s Federal Somalia, Mohamed Abdullahi Farmajo, is among the congregated at the Ethiopian capital. Farmajo has embarked on a solo crusade to undermine Somaliland development and political gains since he came to power in 2017. Among his better-known achievements is the Somalia Societies Integration Program, a.k.a. The Farmajo-100, which aims to infiltrate Somaliland societal segments such traditional leaders, the media, universities, youth and women, to establish a foothold, a voice bold enough to challenge the nation’s re-affirmation of the internationally recognized sovereignty some of its leaders naively ceded to a dominating Somalia with disastrous results.

The AU has recently decided to take ownership of long-sputtering Somaliland-Somalia talks on key issues which have remained impotent, and under Somalia sabotage, since they started in 2012.

With the increasing visibility of Somaliland as an undeniable geo-strategic kingpin in regional diplomacy and security and 30-year-old established democracy and stability as opposed to the UN-backed, international graveyard that is Somalia, the winds, according to political analysts, are blowing on its favour at present. Both Russia and the United Kingdom have sounded out the republic for possible naval and military bases on its territory. The United Arab Emirates has already secured a similar concession in Berbera and facilities are nearing completion.

Africa appears to be waking up to the reality next door that is the Republic of Somaliland – at long last, or so it appears.