Mr James Swan, the Special Representative of the United Nations Secretary-General (SRSG), and the Head of the UN Assistance Mission in Somalia (UNSOM), in his briefing to the UN on Somalia, Tuesday, was full of optimism for Federal Somalia, its projections of first one-person-one-vote elections in 2020, electoral code approval and, in general, Somalia progress in security, economic growth, and a variety of management and governance aspects.

As Mr Swan outlines, international partners were to thank for the progress cited since many of the issues they set for themselves and Somalia to achieve since last October were either attained in full or in part or were promising, and, of course, for completing what they have started.

"There is much to do in the year ahead. Only by working together, as #Somalis, as partners, and in a spirit of #unity and compromise, will progress be made," @UN envoy James Swan told the Security Council at its meeting on #Somalia. For more: https://t.co/hB8EAV2qws pic.twitter.com/1eLPQNRhIG

“Last October at the Somalia Partnership Forum, Somalia and its international partners agreed the main priorities on which Somalia ‘must not fail’ in 2020.

“These include achieving debt relief, holding one person one vote elections, finalising the federal constitution, advancing the fight against al-Shabaab, and consolidating the federal state”, he stated.

Mr Swan said progress was made in ‘Somalia’s economic priorities’ and in the passage of key legislative bills ‘o strengthen Somalia’s fiscal framework, such as the Companies Act and the Public Financial Management Act’.

More interestingly, the SRSG was full of praises for Somalia leadership passing hands peacefully from one head to another, perhaps having in mind the Hassan Sheikh-Farmajo transfer of power as other parts of Somalia did not fare so well such as the Southwest, Jubaland and Galmudug.

“In recent years Somalia has established a track record of regular, peaceful transfers of power.  This commendable achievement must now be preserved in 2020.  In addition, a move to one-person-one vote elections will mean a shift from the elders-based selection of recent political cycles to direct voting by the people of Somalia,” Mr Swan reported.

Mr Swan only shows reservation in the passage of the federal electoral code, primarily, because there were ‘outstanding questions necessary to implement the code’. These included ‘locations of constituencies, how to guarantee 30 percent of seats for women, and the modalities to enable Somalis from across the country to participate’.

To resolve those ‘issues’, Mr Swan called on the ‘Federal Parliament in collaboration with the National Independent Electoral Commission (NIEC) and in consultation with the Federal Government, the Federal Member States and other stakeholders’ to deal with them as soon as possible.

Mr Swan did not once mention than the electoral code he so glowingly appreciated swept the more democratically established, neighbouring Republic of Somaliland into the federal fold as if it was a signatory and not in any way different from the ‘member states’ of the Somalia federal setup he mentioned.

Taking a much-needed respite of all the good things happening in Somalia, according to his report, he turns to ‘Somaliland’.

No word of commendable, exemplary citations or mentions of glowing track records there for a nation that has put nine types of one-person-one-vote, internationally hailed elections behind it since 2001.

Mr Swan, while he urged Somaliland leaders not to delay elections any further than necessary, could have put on the record how different this country was from the one he and his audience were calling ‘Somalia’. He could have underlined how there were lessons for ‘Somalia’ to learn from Somaliland.

Mr Swan goes on to make the most damaging statement on Somaliland ion the last but one paragraph of his report and in reference to the meeting His Excellency the President of Somaliland, Musa Bihi Abdi, had with President Farmajo of Somalia on the behest of the Ethiopian PM, Abiy Ahmed.

He recognized, however, one ‘president’. The rest, especially, the Republic of Somaliland president was to be among what he lumped together as ‘regional leaders’, putting Somaliland beteeen quotes – a very loaded entry by itself.

“Regional cooperation is essential to address the many challenges in the Horn of Africa.  I welcome efforts by the President and regional leaders to resolve differences and strengthen ties. In this regard, we note that Ethiopian President Abiy Ahmed earlier this month arranged a meeting between President Farmajo and “Somaliland” President, Muse Bihi Abdi.  We look forward to their further engagement with a view to constructive dialogue,” he said.

That was Mr Swan. Below is the full report. 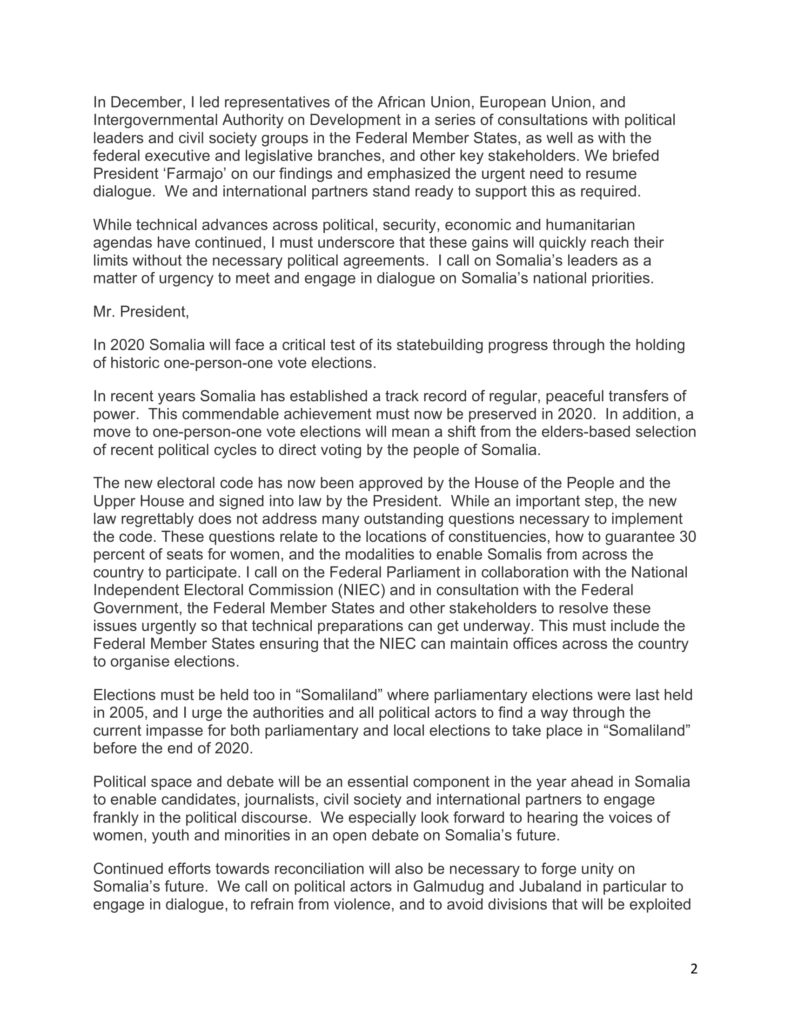 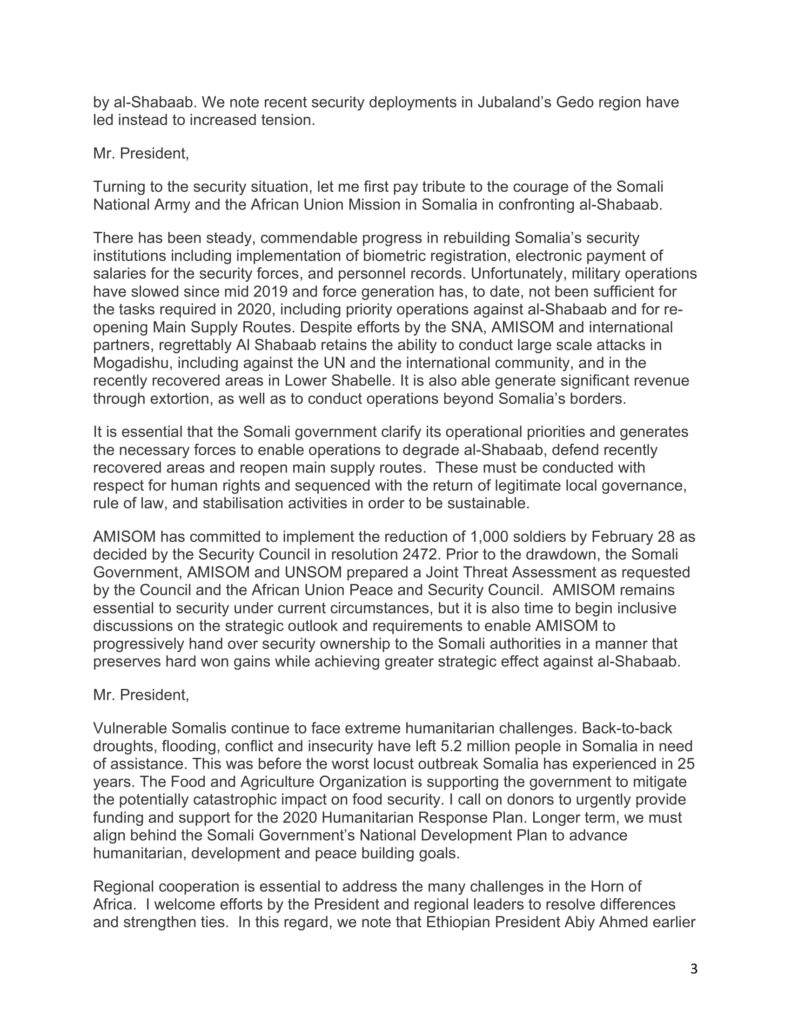 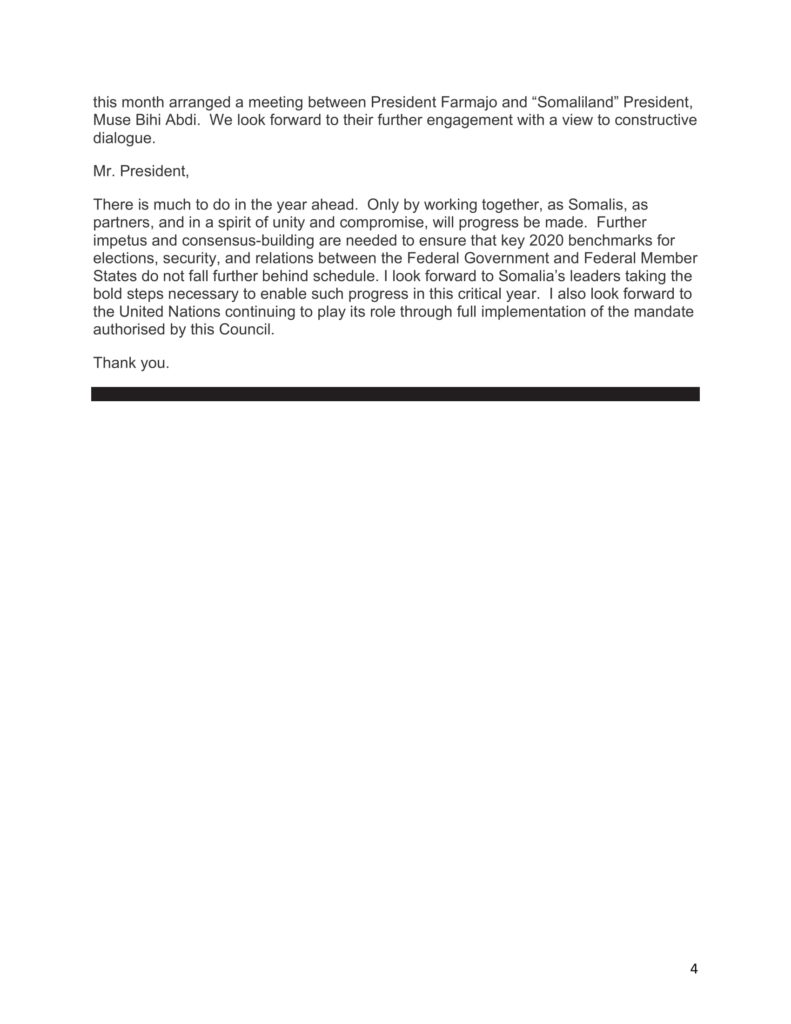