Hargeisa, Somaliland (Somtribune) – The Republic of Somaliland expressed amazement at the logic behind press releases and reports in which the United Nations and international partners keep immersing Somaliland in Somalia politics with which it had not been associated for the past three decades or so.

The Somaliland Ministry of Foreign Affairs and International Cooperation, Wednesday, asked the international community, again, to cease dragging Somaliland into Somalia elections or bear the consequences.

“Somaliland calls on the international community on the highest decibel policy that it is not part of the Somalia elections. We believe that any attempts to associate it with that issue will adversely tip over regional political and security status quo,” the statement said.

The MoFa statement particularly named UNSOM and international Somalia elections partners, and separate statements they made on January 28 and 25 February of this year, both of which treated the Republic of Somaliland as if it is part and parcel of federal Somalia which it had never been.

The first, a press release by the partners, lumped Somaliland with a yet-to-be-formed federal Somalia entity to be established in Beneadir region, the federal seat and host to Villa Somalia.

“The partners stressed the importance of finding solutions to aspects of the bill that remain unresolved, such as the definition of constituencies, the allocation of Upper House seats, progress in achieving the Somali goal of “one person, one vote,” measures to ensure a minimum of 30 per cent representation of women, voting arrangements and representation for Banadir and Somaliland, as well as other operational arrangements.  They called on the Parliament to finalize an implementable law without delay to avoid a risk of political instability,” the statement said.

In this statement, in which UNSOM was a party to, the partners call for special, election arrangements for a Somaliland that was no different from a proposed Somalia capital ‘state’. 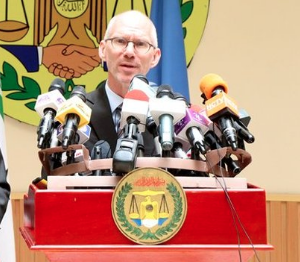 The Head of the United Nations Assistance Mission in Somalia (UNSOM), the Special Representative of the United Nations Secretary-General, James Swan, following up on the afore-published surmise, purposefully stepped onto another damaging, intentional slight of Somaliland’s restored, 30-year-old sovereignty at a report he delivered to the Security Council Tuesday. Mr Swan endorsed the Somalia electoral process and kept extolling the ‘progress’ made and how optimistic he was on Somalia holding its first one-person-one-vote elections in over five decades.

He repeated that issues still remained unresolved. By so doing, he, effectively, endorsed those raised in the 28 January press release.

“The new electoral code has now been approved by the House of the People and the Upper House and signed into law by the President.  While an important step, the new law regrettably does not address many outstanding questions necessary to implement the code. These questions relate to the locations of constituencies, how to guarantee 30 per cent of seats for women, and the modalities to enable Somalis from across the country to participate. I call on the Federal Parliament in collaboration with the National Independent Electoral Commission (NIEC) and in consultation with the Federal Government, the Federal Member States and other stakeholders to resolve these issues urgently so that technical preparations can get underway”, he advised.

What Mr Swan veiledly referred to as ‘enable Somalis from across the country to participate’ was made crystal clear by a statement which his office ans other imt’l partners released on the same date.

“The partners recall their many discussions with the Speakers of both Houses of the Federal Parliament, as well as the NIEC, the President and the Prime Minister, during which they drew their attention to aspects of the law that need to be clarified.  These include the identification of constituencies and allocation of seats to the constituencies, identifying which seats in Parliament will be reserved for women to ensure a minimum 30 per cent representation, modalities for electing the seats allocated for Somalilanders, and the representation of residents of the Benadir region in the Parliament,” the statement elaborated.

In the same breath, he asked Somaliland to hold its parliamentary elections in 2020 without distinguishing it from the ‘Somalia’ package he tossed around.

In his report, Somaliland (in quotes) was nothing more, nothing less than the member states of Federal Somalia: Puntland, Jubaland, Hirshabelle, Galmudug and Southwest. Referring to Farmajo as ‘President’ and His Excellency, Musa Bihi Abdi, as among ‘regional leaders, Mr Swan wished to emphasize that Somalia needed to mend fences with its satellites – among which, obviously, Somaliland was, to him, one.

“Regional cooperation is essential to address the many challenges in the Horn of Africa.  I welcome efforts by the President and regional leaders to resolve differences and strengthen ties.  In this regard, we note that Ethiopian President Abiy Ahmed earlier this month arranged a meeting between President Farmajo and “Somaliland” President, Muse Bihi Abdi.  We look forward to their further engagement with a view to constructive dialogue,” he said.

The MoFA statement asked UNSOM and other international community members so blatantly continuing to ignore the overwhelming wishes of over five million people and the democratic governance so solidly established over the years in Somaliland, to refrain from doing so. 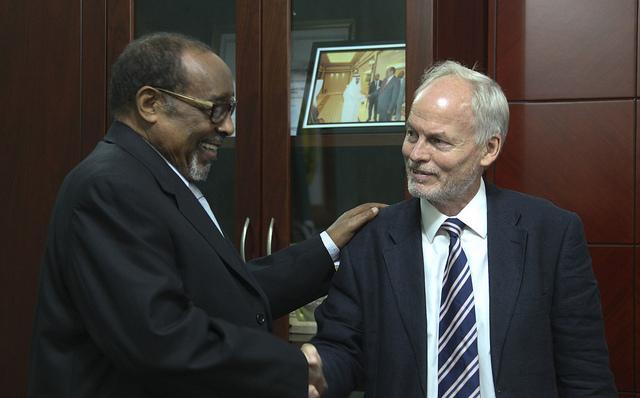 Most Somalilanders have, since the Swan report surfaced Tuesday, been calling for a Somaliland travel ban to the SRSG, Mr Swan, similar to that former President Ahmed Mohamed Mohamoud ‘Siilaanyo’ placed on SRSG Nickolas Kay in 2013 on similar – if not less – violations against the country’s 97%-inhabitants-approved restoration of sovereignty.

He was banned from #Somaliland and was told never to return. 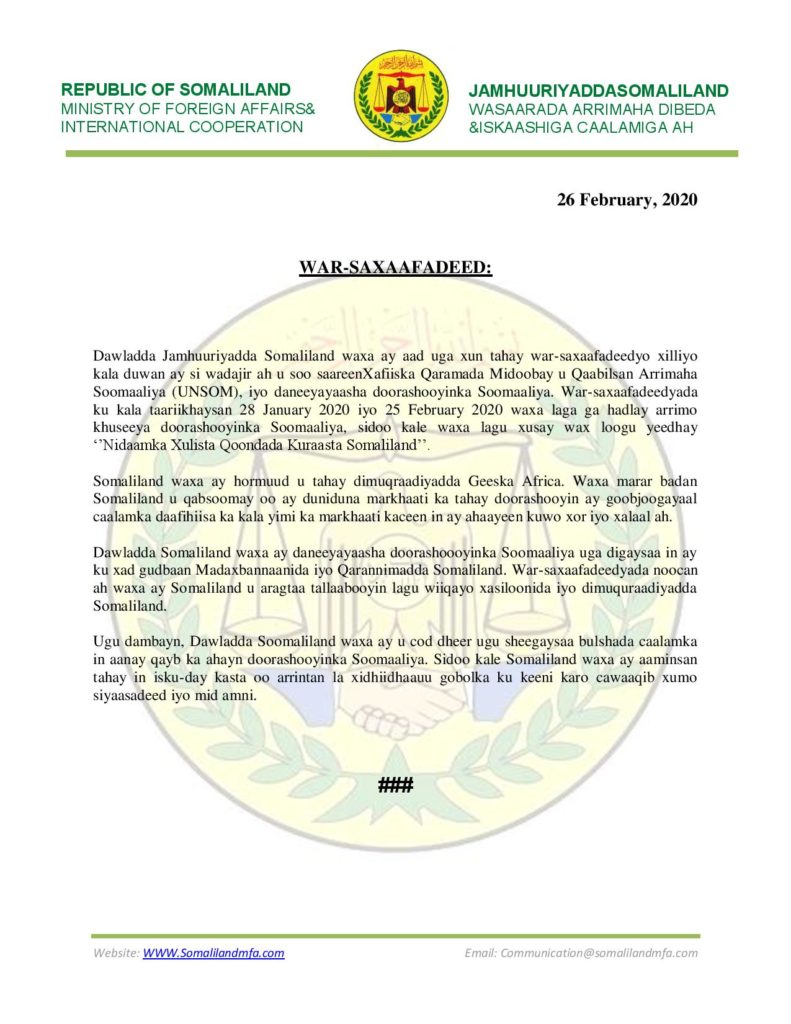