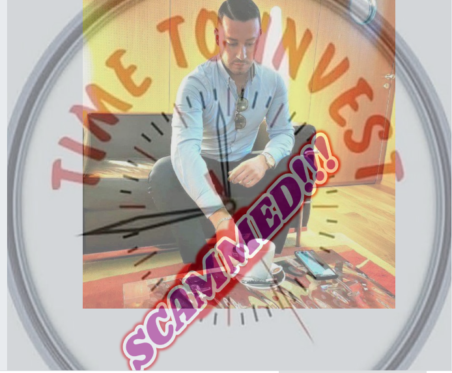 As soon as one starts writing the word ‘Forex’ on a Facebook page, even before you complete the word, a dozen or so traders jam the page, popping up, vying for attention.

Basically what they do is to appeal to the glutinous, innate nature of the small mind, and on stressed out, hard-pressed low-income workers and pensioners looking for quick ways to bolster their meagre savings.

The scammers prey on subscribers by using a number of irresistible guiles: huge offers, hefty returns, communication messages, alluring adverts, testimonials and names and titles that lead the unwary to believe that he/she is dealing with a bonafide, international forex platform. 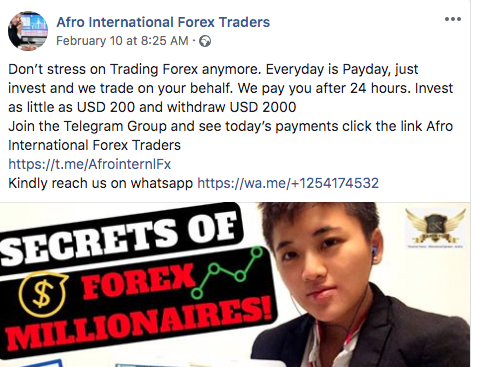 Testimonials come in several forms: video messages of nondescript, so-called investors (never a traceable or noteworthy firm or name) who gush how thrilled he or she was with dealing with this or that ‘forex trader’. Another form is a tired copy of a video which list names, amounts invested and returns realized. 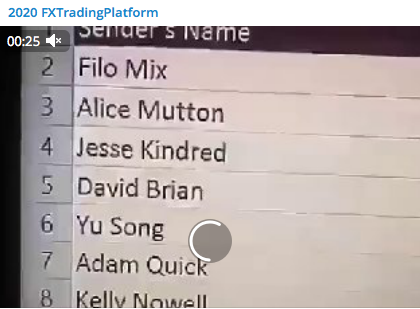 Another method, that appears to be working for them, is the listing of a number of genuine remittance firms through which they claim returns will be sent to the investor.

For Somalis, especially, to see revered bynames in the remittance industry that they trust unreservedly, appearing in the list is more than an adequate guarantee to save, quick delivery. Only, if they asked said companies of references, later disappointments could have been avoided. Many don’t – and that is the margin which the scammers bank on. 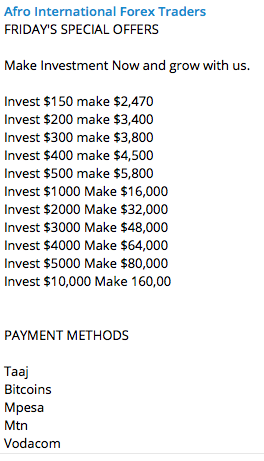 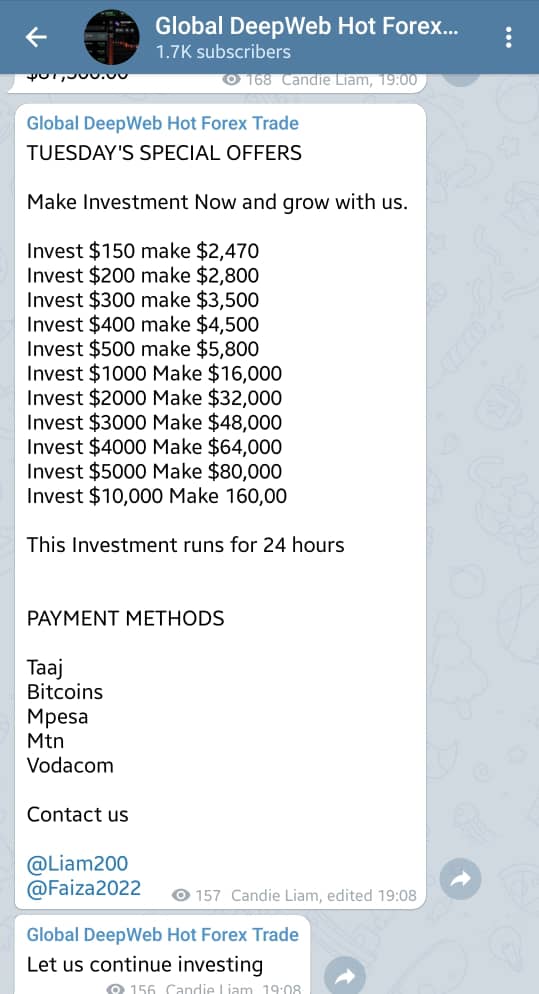 The scammers list a number of countries in which, ostensibly,  they have offices set.

They also list a number of links they direct people to assess values and ‘see proof of payment’, as in the case of bitcoins which are designed to lend encouragement and inspiration to hesitant ‘investors’. 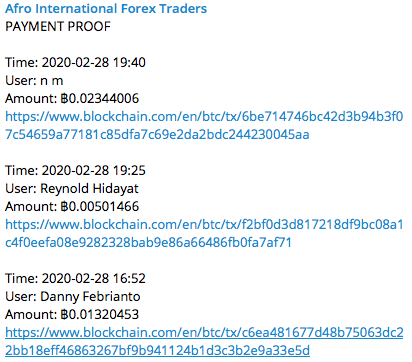 A very effective method, so cleverly designed to project an image of hard-working, considerate brokers at the other end of the line, is to keep beaming that small glitches in the system were being attended to, and that, soon enough, investors’ will get through as soon as these are cleared. 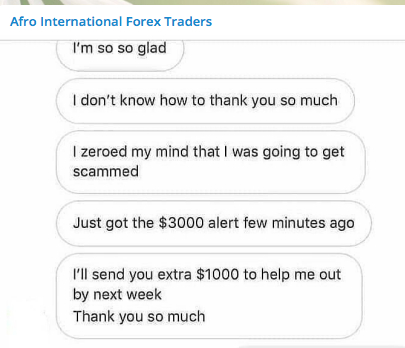 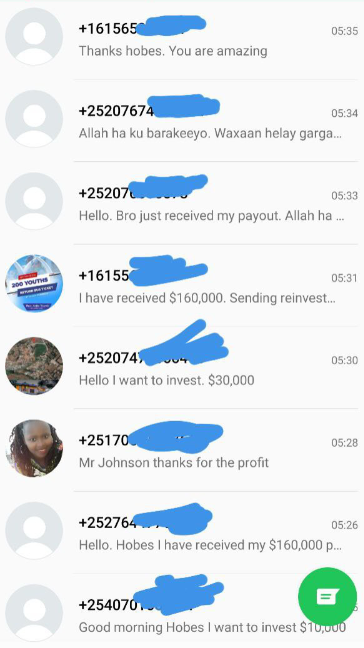 Hurrah! There it is. ‘Go collect’ messages inundate Telegram, messaging boards the scammers use. Of course, one never knows if there ever were real people glued to their screens waiting for such glad tidings or scampering toward payout counters at remittance companies who had never heard of the so-called forex traders.

This from Afro International Forex Traders – another name of the same scammers. 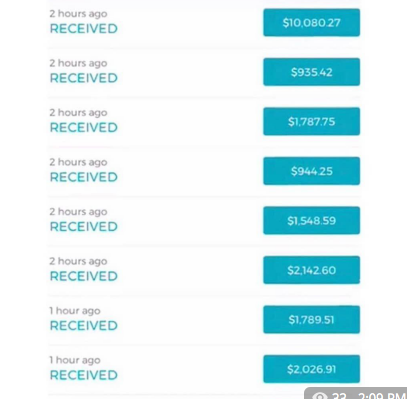 Soon enough, thousands pour in millions of US Dollars expecting to get rich overnight.

A number of telltale signs give away the scammers. Discerning individuals and investigators have no difficulty in spotting the anomalies, the contradictions and the copy-and-paste messages splashed across front pages and messaging boards of seemingly different companies. Only most of them are one and the same, using different titles or variations of the original, presenting themselves as another honest trader.

For someone who invested, for instance, US$150 to get 16 times the amount within 24 hours is impossible – if only the ‘investor’ took a moment to look.

For that ‘investor’ who is lassoed in on an unexpected, huge return for the little he/she has put in, a shock awaits.

There it is. The scammers have set their eyes on another US$395 in unspecified, first-time-mention, official-sounding taxation fee. This means the scammed robs not only US$150 but US$545 of the ‘scammed’.

The line goes that unless one pays the latter amount, he/she will not be eligible for payment.

Then all the lines go dead. The scammer changes contact name on a messaging platform to another down his/her list: Candie, Lisa, Johnson, Hobbes, Faiza, Caroline…and so on and so forth.

A typical profile page of a contact (this instance with Hot DeepWeb Forex), would look as below (empty!!): 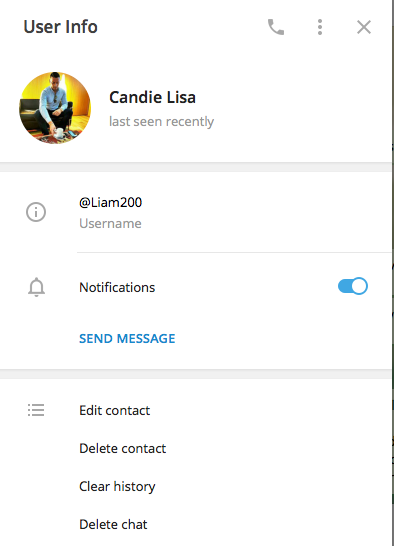 The mistake they are making here is obvious. Taaj works mostly for Somali subscribers. Any Taaj user knows that a sender has only to enter one’s name and phone number as a sender window for the beneficiary to receive the money wired at his/her phone without visiting Taaj offices to confirm whether expected money has arrived or not. And so is true with other remittance platforms.

Another mistake they had made is the name ‘Dahabshiil Express’. There is nothing of the kind. All Dahabshiil systems, like Taaj, are quick and do not need to add words like ‘express’ to impress customers.

The most glaring mistake of all, which undeniably reveals, the duplicate nature of names of the so-called Forex Traders, is the copy-paste testimonial of names of people whose investments have successfully come through.

The same set of names; the same poor copy of a video of a page on a screen. 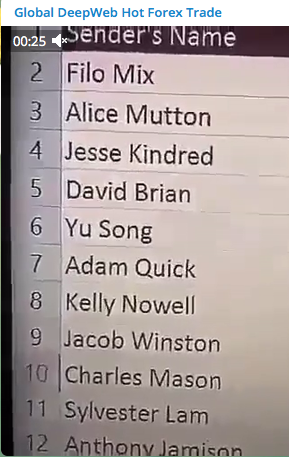 Both governments of the Somaliland Republic and Federal Somalia have warned investors of scammers, swooping down on a number of ‘traders’.

Some of these traders, seeking licenses from the Central Banks of both governments, failed to prove that they delivered what they promised or – in the eventuality that ‘trades’ failed how they could adequately cover the millions they received of investors which were no way near deposits lodged with the banks.

Investors who have lost money can, at the least, take action in any and/or all of the following: