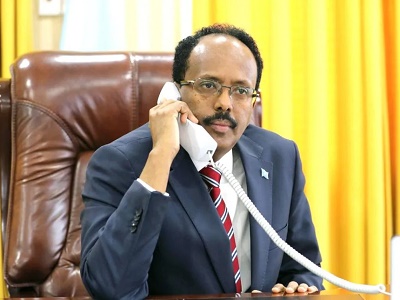 For the first time in the past three years, the United Nations Secretary-General (UNSG) and members of the UN Security Council (UNSC) have collectively expressed their disapproval and disappointment for the protracted political impasse and conflicts President Farmajo has engendered in Somalia immediately after his election and they have called for quick end.  In press statement issued on 28 February 2020, the UNSC called on Somali stakeholders at all levels “to refrain from increasing tensions and taking actions likely to make dialogue more difficult, including those against the letter and spirit of the provisional federal constitution of Somalia,” and “to engage in broad based consultations and consensus building between the federal government and all federal member states (FMS).”

Unfortunately, the UNSC’s calls fall on deaf ears and the question is, “to whom the calls are primarily directed?” I believe the calls are first and foremost directed to the President of the Federal Republic of Somalia, H.E. Mohamed Abdullahi Farmajo who has the responsibility to defend and protect the respect of the Provisional Constitution and Rule of Law. But President Farmajo remains oblivious to UNSC’s calls to end the political impasse and conflicts raging in Somalia.

The calls provide hints of the sources of the political impasse and conflicts and are in agreement with the joint call of the Presidents of Puntland and Jubbaland, Said Deni and Ahmed Madobe for a national consultative conference to discuss the dire situation of Somalia. All calls imply the sense of hopelessness towards president Farmajo’s leadership for steering the country to national reconciliation, unity, and respect of the rule of law for a responsible government.

On February 24, 2020 the UNSC met to discuss the UNSG’s informative report No S/2020/121 dated 13 February 2020 describing the political, security, and humanitarian situation in Somalia during the period November 5, 2019 and February 4, 2020. The 6 page remark of the Special Representative of UNSG, (SRSG) James Swan introducing the report to the UNSC highlighted the 5.2 million Somalis in need of humanitarian assistance, the devastating effects of desert locust outbreak that infested many regions, the few military operations against Al Shabab that prevented the reopening of main supply routes between Mogadishu and cities in Southwest and Hirshabelle states, and many key national priorities.

The report informs the UNSC and the international Community at large the political impasse between the federal government and FMS going on for more than a year which impeded progress on all key national priorities such as the implementation of the national security architecture, the transition plan, the finalization of the constitution, the delivery of meaningful financial reforms, the preparation of peaceful, transparent, timely, credible, free and fair one person one vote election in 2020, the deepening of federal system of governance, and the degrading of the fighting and influence capability of terrorist groups.

The political impasse could derail the symbolic meetings of the finance ministers necessary for moving the debt relief process ahead. In fact, Puntland and Jubbaland states are planning to suspend the participation of their ministries in all meetings between the federal government and FMS. The federal government wasted three valuable years for pursuing narrow political interests rather than national interests.

The report provides statistical data about the increasing number of violent attacks carried out by the terrorist groups during the three month period and acknowledges that “Al Shabab retains the ability to conduct large scale attacks in Mogadishu and to generate significant revenue through extortion as well as to conduct operations beyond Somalia borders.” It reports the increase of checkpoints in Mogadishu while Mogadishu residents are protesting against the old checkpoints that depressed the livelihood of the city. It describes the frustration of international partners about the problematic transfer of security ownership from African Forces (AMISOM) to the Somali security forces because of the high risk for quick reversal of the hard earned gains in the past 10 years due to the ineffectiveness of the Somali Security Forces. This is to say that Somalia has lost critical years for rebuilding capable reliable Somali security forces.

Furthermore, the report mentions the boycott of Ahlu Sunna Wal Jama (ASWJ) and four Presidential aspirants in Galmudug elections accusing the federal government of controlling the process. In particular, the report quoted the appeals made to all political actors involved in Galmudug and Jubbaland elections to engage in dialogue, to refrain from violence and to avoid divisions that will be exploited by al Shabab. In corroboration, the Political Coordinator of US Mission at the UN, Rodney Hunter, expressed appreciation that boycotting candidates refrained from violence and demonstrated commitment to a peaceful, negotiated reconciliation process. He emphatically said that the deployment of government forces in Gedo for a politically motivated offensive is unacceptable. He agreed with many that the federal government takes the blame for the flawed elections in southwest, Jubbaland and Galmudug states.

Unfortunately, the federal government rejected negotiated reconciliation and decided use of force against opposition groups. Indeed, for preemptive purpose, Special Forces of the federal government trained by Turkish Government attacked ASWJ base in Dhusamareb and forced ASWJ leaders and defenders to surrender or face massacre with lethal weapons supplied for the war against terrorism. The leaders of ASWJ capitulated and accepted to exit from the political space.

The federal government remains silent about the number of people killed and wounded, and the level of the destruction of properties in Dhusamareb offensive that continued for 48 hours. This is evidence for the lack of government accountability in Somalia. The U.S. diplomatic intervention in Galmudug election disputes for mediation is murky.

To break the political impasse, UN led delegation composed of representatives of UN, EU, and IGAD, visited the FMS capitals where they met political leaders, civil society, officials from the executive, parliamentarians and other key stakeholders. The delegation briefed President Farmajo on its findings and urged him to resume dialogue for reconciliation and consensus building with FMS. But President Farmajo ignored the advice and engendered armed conflict in Jubbaland and Galmudug.

The SRSG appealed to all Somali stakeholders for the urgent need to work together in the national interest. But the SRSG appeal remains inconsequential in the face of emerging bleak reality. In an article published in the WardheerNews Website, Faisal Roble, well known Horn of Africa political analyst exposed the overlooked “Farmajo Doctrine,” based on “Might is Right,” to which “US Government and United Nations remained oblivious for too long.” Farmajo’s doctrine aspires to revenge against anyone who humiliated or criticized him, to marginalize anyone who demonstrate integrity and independence minded, and to imitate to the cult leadership of late Mohamed Siad Barre, leader of the military regime and late Ahmed Godane, leader of Al Shabab for their oppressive and secrecy ruling.

The SRSG expressed concern about the possibility of interrupting the regular peaceful transfer of power accustomed in the past. One of the reasons underpinning SRSG concern is the impractical electoral law signed by President Farmajo on 20 February 2020 and the absence of clear political will and credible preparation for the holding of free and fair one person-one vote election in 2020. He also expressed concern about “the lack of political space and debate essential for political candidates, journalists, civil society and international partners to engage frankly in the political discourse.”

The international partners of Somalia are now supporting a federal government determined to commit all kinds of human rights violations and crimes against its people. This is against the international principle of “responsibility to protect” all people from genocide, war crimes, and crimes against humanity. Somalia as one of the fragile states, under chapter VII of the UN Charter deserves clear international commitment to ensure that human rights law and democratic system of governance are adhered to without ambiguity.