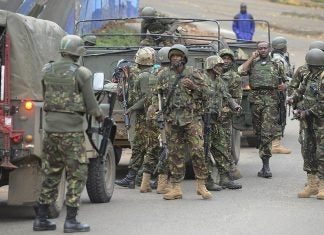 Muslim clerics have called upon the government to rethink its strategy and withdraw the Kenya Defence Forces (KDF) from neighbouring Somalia.

Speaking to the Nation, Kenya Muslims National Advisory Council (Kemnac) chairman Sheikh Juma Ngao said Kenya should respect the Somali government and allow it to deal with its issues.

“The ongoing tension between the two governments is affecting our brothers in North-Eastern region. They (government) should rethink and bring our soldiers back home,” said Sheikh Ngao.

He further urged the government to protect its own people instead of exposing them to danger.

“If they are worried about Al-Shaabab threats, then they should place the military on our borders, not inside neighbouring countries. Let them come and deal with the ones in Boni forest first,” he said.

READ: Kenya to start talks on KDF exit from Somalia

“What is going on currently between the two governments is directly affecting the residents …The government should stop lying to us and resolve the matter. If it is withdrawal of KDF, then they should undertake to do so,” said Mr Abdi.

Another Muslim cleric, Hashim Gedi, placed the blame for the crisis in North-Eastern squarely on the government.

“Our brothers are moving away from their own homes due to insecurity. I thought we are all patriots of this country, how can the government cause insecurity to its own people?” he asked.

“We all saw what happened in Mandera. Our children are out of school after they transferred all the teachers. Most classrooms in the region are now empty” Mr Gedi added.

“They are saying they are protecting Kenyans. But all we are seeing is the opposite of that.”

The comments from the clerics come as tension in Mandera town entered its second week after two Somali military camps clashed in the neighbouring town of Bula Hawa, the effects of which spilled over into Kenyan soil.

Somali president Mohamed Farmaajo is expected to meet President Uhuru Kenyatta at a date that is yet to be announced.

This follows a meeting between Mr Farmaajo and Interior CS Fred Matiang’i’s delegation where he presented an invitation from Mr Kenyatta.