An official emissary of the Federal Government of Somalia of Mogadishu, Minister of State for Finance, Mohamoud Hayir Ibrahim, urged the President of Puntland to immediately wage an all-out military offensive against the Republic of Somaliland to teach the secessionists and ‘Somali haters’ an unforgettable lesson and return what he called ‘missing Puntland’ regions back to the Somalia fold.

” I used to hear, especially at presidential campaign speeches, hopefuls vowing to return missing regions and areas back to Puntland. I believe, now is the most opportune moment to so,” he said addressing, Wednesday, a conference of Puntland-born and Puntland-adopted grand consultative conference Puntland Federal State of Somalia President Saeed Abdullahi Deni called on 15 March.

” I do hope an important outcome (of the conference) should be on how to return missing areas which are a symbol of Somalia unity and the solidarity of the Somali people,” he said, adding, “it would be a lesson to those (Somaliland) who want to fragment Somalia, to render Somalia unity asunder rendering them forget their plans”.

He went haranguing the Puntland State President to take a bold initiative and make Federal Somali dreams of sequestering Somaliland regions as part of the Somali failed state which he represented.

“Mr President,” he cried, “in you, I espy courage/bravery. In you, I attribute an astute leadership. I know enough of you personally as a friend. I trust in your competence and that of your councils and (hesitantly) in your Vice President. We will accord you full support in the unity and solidarity of the people of Puntland”.

Minister Hayir, of course, had no need to name the areas he was alluding to his audience in black and white.

“We know every word, every scratch of pen that Somalia lifts against Somaliland,” he said. “This (latest Somalia) development is nothing new to us. What this kid (the state Somalia Minister), who knows nothing about the history of Somaliland is nothing but merely another senseless bleat”.

Faisal Ali Waraabe, UCID opposition leader, went much further than that by vowing that Somaliland will not stop short of Garowe, the Puntland capital, if Somalia did not cease the caustic provocations it late made a habit of.

World-pampered Federal Somalia, through its federal state, Puntland, and especially during the last three years under President Farmajo, had been trying to drag the 30-year-old Republic of Somaliland into the mess it has become.

And all because the British Protectorate of Somaliland made an immediately regretted mistake by merging with a dominating Italian Somalia in 1960. Somaliland had the diplomatic recognition of over 35 countries, including Britain, the United States and other members of the UN Security Council under its hat by 1 July 1960 when its government and Assembly moved to Mogadishu only to be tricked into a ‘union’ that it neither officially signed nor entered into in any legally binding manner. 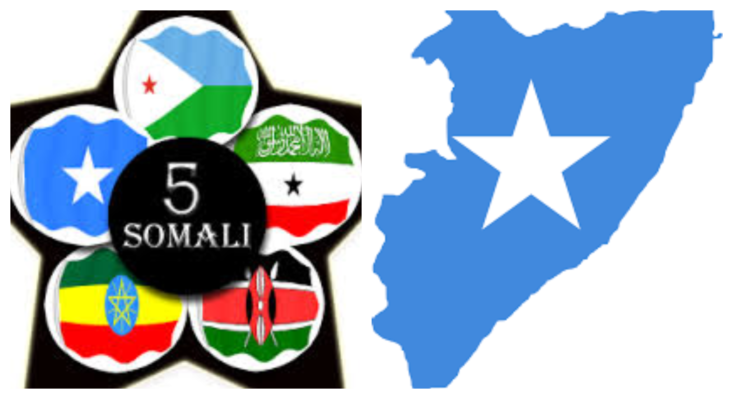 Somaliland, of course, was inebriated by an ill-calculated vision of a Greater Somalia Republic which, it was led to believe, the two of them filled the first two points of the five-pointed white star in flag representing besides Somalia and Somaliland, Ethiopian Somalis (Ogaden and Haud/Reserve Area), Kenyan Somalis (NFD) and Djibouti. The latter three never appeared nor showed any desire to make the same mistake as Somaliland’s.