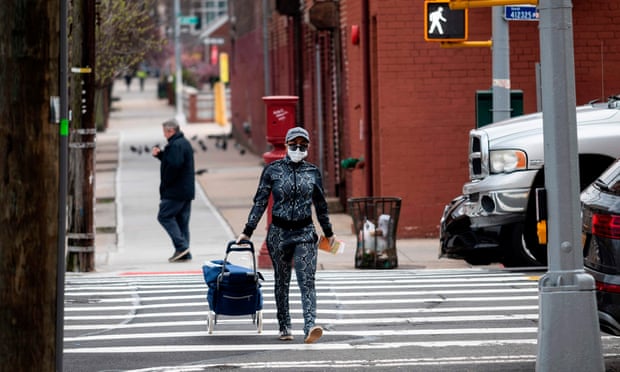 For a week or so now, New York has been at the centre of the coronavirus pandemic in the US, the death rate in the city headlined all over the world. For those of us who live here, the sense of worsening crisis – if we’re lucky – is measured in large internal fluctuations and small external ones.

The hospital ship berthed 20 blocks south of my house is something I only see on the news. What has changed is more immediate. Things that even a week ago seemed necessary, including getting out every day for fresh air, now seem wanton. Our movements have become even more circumscribed. When we do go out, fully 90% of people on the street are in masks and our once-weekly trip to the store has changed. The panic buying phase is over, replaced by different fears. Yesterday, the supermarket was empty of people.

At home, we lurch between wild optimism and gloom. It is a paradox of our present condition that, for many of us with young children, there is simultaneously no time and too much time. Whole days seem to pass in which I do nothing but stack and unstack the dishwasher, transitioning from work to home-school to dismantling the fort in the living room to collapsing into bed at 9pm. At the same time, not running a schedule has opened up a vast mental chasm, in which every assumption from before the outbreak is being tested. Why did we do it like that? And do we have to go back to doing it like that again.

It’s hard to tell if any of these reckonings will last. I remember after my mum died, 15 years ago, thinking things will never be the same. In the first flush of grief, I was convinced I would value life more. None of the trivial stuff would matter. I would be kinder, braver, more grateful for sunlight on the garden – the whole nine yards.

That lasted about three weeks. As the shock began to wear off, all I wanted was to return to my old life. I couldn’t remember what it felt like to see the world differently and I didn’t want to. There were no epiphanies: just the long, hard slog back to something approaching normality.

For a lot of people, this period will entail real, personal grief as well as culture shock. But for those of us lucky enough to get through it without losing someone close, there will still be that period of grief-like readjustment, when for a second we will continue to see the world differently. It’s happening now, and somehow the more trivial the reckoning the more profound the sense of altered reality.

Take laundry. Most New York apartment buildings have tiny communal laundry rooms where it’s impossible to enforce social distancing. So we’ve all stopped doing laundry, or at least stopped doing it every week. We’re not going out, so who cares. And why do we do it every week anyway? Getting the sodding laundry done was a huge weekly arse pain that has all but disappeared. We rewear clothes. We handwash in the sink. We don’t bother with the duvets. The sky hasn’t collapsed.

The list of suspended obligations such as these is long and eye-opening: the abandonment of all non-hygiene-related personal grooming, particularly for women, points a big arrow to how time-consuming and expensive that bullshit was in the first place. The complete death of interest in celebrity comings and goings feels like cause for a national holiday. A lot of the things that seemed not only non-negotiable but desirable now don’t seem that way at all.

The real luxuries are proving to be elsewhere. When the schools finally reopen I imagine that, in the first instance, having a working day without kids will seem unbelievably generous, even to 3pm when school ends. With this in mind, I can’t imagine going back to haemorrhaging a huge proportion of my income on after-school and summer camp programmes, just to win an extra three hours in my day. I’ll be more efficient. I’ll see more of my kids. If I make less, I’ll spend less. Everything will balance out.

I have been here before. My instinct is these big resolutions won’t last. We’ll forget. The gravitational pull of business as usual will undo what felt like the most searing of insights. Finishing work mid-afternoon to run to pick up the kids will, after a few weeks, get harder, as the memory of working while being interrupted starts to fade. Perhaps another memory will remain; a more general sense of what it felt like to opt out of things we thought weren’t even optional; of asking ourselves if there were different ways to be.