The National Preparedness Committee for COVID-19, Monday, ordered a lockdown of all mosques and other makeshift congregational prayer places as the country’s tally of confirmed cases rise to five.

The NPC ordained that effective from 15 April all mosques will be closed to adherents and that prayers be conducted at home.

The Committee ordered Mosques Mu’ezzins to add the words Salluu Fii Rixaalukum – meaning ‘Pray at home!’ as the Prophet SWA asked Muslims to do at times of pandemics and catastrophes of similar magnitude. 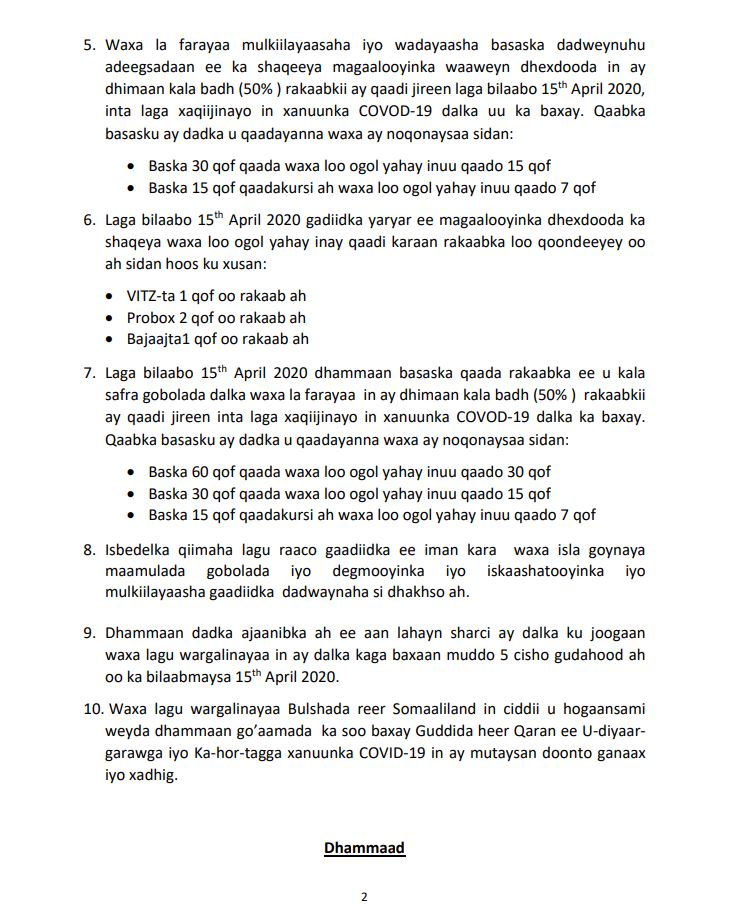 The Committee added 4 more weeks to the term stipulated at their 4 April statement on the suspension of all educational institutions. The new order will continue from April 18 when the first closure term expires.

The new measures, moreover, reconfirmed that borders with Somalia, Djibouti and Ethiopia will remain closes as seaports will be except for Berbera which remains open for import of life-saving foodstuffs and other essentials.

Taxis would only take 2 (for Probox and similar cars) or 1 at a time for smaller vehicles.

The Ministry of Health Development, on a related development, announced earlier that of 24 cases tested, three tested positive raising the total of in-country confirmed cases to five.

The Minister, Omar Ali Abdullahi ‘Bede’, announcing the new cases stated that 2 of them were living in Hargeisa and the other in Borama.

The Minister said samples were tested in WHO-certified laboratories in South Africa. He added that they have put a 24-surveillance over two more suspects awaiting further sample results taken of them.

The Ministry of Health Development of #Somaliland conducted 24 laboratory tests so far, and three cases are confirmed for COVID-19, making the total cases five (5).

Of the first two cases, 1 lived in Burao, the other in Berbera. The Minister revealed conditions of these two first cases were stable and patients recovering.